Mike’s note: Mike Merson here, Jeff’s managing editor. With our offices closed for the holidays, we’re bringing you some of the best essays Jeff’s written throughout his career.

Today’s essay, originally published back in 2012, happens to be one of his most popular…

It involves a radical tax plan to fix the U.S. government’s deficit problem. And as you’ll see, it applies just as well today as it did back then.

The United States of America could be the happiest place on Earth.

We just need to change our income-tax structure.

After filing and paying my 2011 taxes, there was still a little money left in my checking account. So I decided to splurge a bit and take the wife and kids on a mini-vacation to Disneyland.

As I stood in the ticket line outside “the happiest place on Earth,” I noticed the wide variety of people standing in line with me. There were tall people… short people… fat people… skinny people… people of every ethnic background imaginable. There were kids, teenagers, young adults, mid-lifers, and senior citizens. Every genetic and chromosomal background possible was represented, as was – I think – every income class.

Certainly, the gentleman in front of me – with the tapered slacks, the Façonnable pullover shirt, and the Cole Haan walking shoes – earned a decent living. In front of him,
though, was a man wearing oversized denim shorts, a “Battle of the Bands 2009” t-shirt, and a stained baseball cap. He probably wasn’t doing as well financially.

But here’s the thing… we all paid the same price for our admission tickets.

And Disney is a hugely profitable corporation. Just look at the stock over the past 10 years… 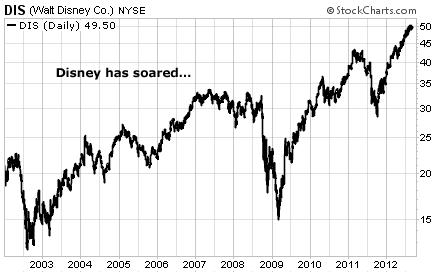 I called Disney’s shareholder services department to get an answer. After being transferred about five times, I was finally able to convince the lady on the other end of the line that this wasn’t a joke… and I was a serious financial analyst.

She agreed to answer my questions on the condition of anonymity. So, let’s just call her “Snow White.”

Here’s how the interview went…

Me: Why doesn’t Disney charge different admission prices based on the income level of the people visiting its theme parks?

Me: Are you saying the tax policy of the United States of America is stupid?

Snow White: Alright… if you’re asking this as a serious question, maybe “stupid” is too strong a word.

At Disney, we charge everyone the same admission rate because once inside the park, everyone has equal access to all the rides and attractions. We do have discount tickets for young children, since they may not be permitted on some of the rides because of safety concerns. And we do offer a small discount to organizations that purchase a large number of tickets all at once. For the most part, though, everyone pays the same price to enjoy our parks.

Me: OK. Everyone pays the same because everyone has the same opportunity. But let’s say someone has an unfair advantage to the rides, would he have to pay more?

Snow White: There are no unfair advantages at Disney.

Me: Oh, sure there are. For example, my favorite ride is the Indiana Jones Adventure – which is located all the way over at the north side of the park. If I enter the park from the south side, I don’t have the same opportunity to ride the ride as someone who enters from the north. He should have to pay more.

Snow White: Well… no… You can always just enjoy the rides that are closer to where you enter the park. Or you can walk over to the north side to ride Indiana Jones Adventure.

Me: But he’s closer… And that’s an advantage.

Me: Never mind… Can you tell me how you decide what to charge for admission?

Snow White: Yes. Admission prices are set to ensure a good value for the consumer, enable us to keep the park in excellent condition, allow us to pay our employees
a competitive rate, and provide a reasonable return to our shareholders.

Me: But what if I can’t afford your admission price? Can you just charge some rich guy in line in front of me for two tickets and then just give one to me?

Snow White: That’s not really a serious question, is it? Of course we couldn’t do that.

Me: But what if I’m out of work? Or if I just spent my extra money on a new set of headphones? Or if there are just other things I need to pay for first, and I don’t have the money for a ticket to Disneyland? What am I supposed to do then?

Snow White: Well… I guess like anything else you might want out of life, you’re going to have to work hard and save for it.

Me: Thank you for your time, Snow White.

As I hung up on Snow White, it occurred to me that I shouldn’t be asking Disney why it doesn’t have an admissions rate similar to the United States progressive tax policy. The company is doing great. Go back and take another look at the DIS chart.

Instead… we should be asking the U.S. government why it doesn’t have a tax policy similar to Disney’s admissions rate. 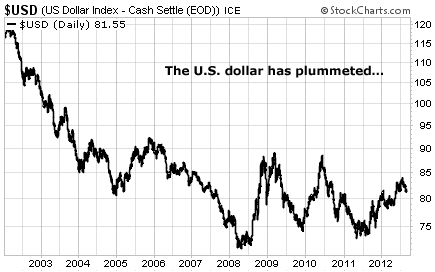 The U.S. dollar has lost one-third of its value in the last 10 years. Our debt level is exploding. We can’t balance our budget. And we’re about to tumble over the fiscal cliff.

Forty years ago, Disneyland had a “progressive” ticket structure. Different rides cost different amounts of money depending on the “thrill” of the attraction.

I remember fighting with my brothers over who would get the rare and valuable “E” tickets that allowed us to ride the Matterhorn… and who would get stuck with the cheap “A” tickets and have to hang out on King Arthur’s Carousel.

Disney doesn’t operate that way anymore. It ditched the progressive ticket policy in favor of a flat-rate plan.

Everybody pays the same price to get into Disneyland. It doesn’t matter if you spend the entire day riding Space Mountain… or park yourself on a bench in the shade and wait all
day for the character parade. Everyone pays the same amount to spend time in the happiest place on Earth.

Forget about taxing people on a percentage of their income. The rich guy shouldn’t have to pay more for an admission ticket than the poor guy. Instead, everybody should pay the same price for the chance to enjoy all the rides, attractions, and opportunities available in the United States of America.

The tax amount should be based on the same principles Disney uses to set its admission prices. As “Snow White” told me when I called up Disney’s shareholder services department, those
principles are: “To ensure a good value for the consumer, enable us to keep the park in excellent condition, allow us to pay our employees a competitive rate, and provide a reasonable return to our shareholders.”

That’s an obscene amount. But it reflects the current spending habits of the U.S. government. So that’s the ticket price. That’s what you need to pay if you want to take advantage of any or all of the opportunities available in America.

If it’s too expensive, remember what Snow White told me yesterday: “Well… I guess like anything else you might want out of life, you’re going to have to work hard and save for it.”

If you’re unwilling or unable to do that, leave. Nobody is required to stay at Disneyland.

Maybe it scraps the plans to build Mr. Obama’s Wild Health Care Ride. Maybe it stops subsidizing Solar-Powered Fantasyland. Maybe – like any well-run corporation or household – the government starts paying better attention to where it wastes its money.

Then it can lower the price of admission and everyone can enjoy the happiest place on Earth.

It sure worked well for Disney.

Is it really possible for you to see Crypto-like gains, from some of the bigger and safer stocks in the market.

Watch this video to see the proof for yourself…

Whether you’re an experienced investor or a complete novice…

Whether you want to build serious wealth, or would just like to self-direct your IRA with more confidence…

Even if you’re starting out with limited resources…

This Could Change Your Life

(Only available for a limited time. Please watch immediately to avoid missing out.)