Editor’s note: Last Saturday, we tipped you off to a major technological shift happening all around the world. It’s something that early investors can make a lot of money from, before anyone else even catches on.

That’s why we’re once again featuring Bonner & Partners’ chief tech analyst Jeff Brown. With over two decades of hands-on experience in the tech industry – and the connections that comes with – he knows how to spot big opportunities long before Wall Street catches on.

And all this year, he’s been banging the drum on one such trend…

If you take Route 309 North from Allentown, Pennsylvania for an hour and 15 minutes, you’ll eventually run into Mahanoy City.

It’s a small town – so small that you could stroll right down the 20 blocks or so that compose Centre Street in about 15 minutes if you took your time.

As such, it seems like an unusual spot to be the birthplace of an $81 billion industry.

In 1948, a local entrepreneur set out to solve an important problem. Broadcast television signal reception was poor for the folks in Mahanoy City due to the surrounding mountains. The solution was to take those television signals from the top of a mountain and then distribute them over a new kind of network.

That network became known as community antenna television, otherwise known as cable TV, or CATV. And no one could have guessed how large the industry would become.

Over the course of the next 60 years, companies like TCI, Cablevision, Continental, Time Warner, AT&T, and many others spent hundreds of billions of dollars racing to connect every home in the United States to their cable TV networks in hopes of selling them multi-channel television services and, eventually, internet access.

It was a massive undertaking, one in which hundreds of companies profited from greatly over the years.

And just as important, it was one of the first projects of this scale that wasn’t about roads, bridges, or canals. It opened the doors to a whole new way of thinking about infrastructure.

Right now, the world is embarking on another, similar project. Like cable TV, it’s a massive infrastructure buildout, perhaps the biggest in history: the construction of fifth-generation (5G) wireless networks.

A wireless network buildout is akin to the cable TV buildout, just without the cables. Wireless infrastructure enables our phones and other electronics to communicate with each other via the internet. This is done through the construction of cell towers.

If you have a modern smartphone in the U.S. – or the developed world, for that matter – it’s likely that you’re using a fourth-generation (4G) wireless network. About once every 10 years, the world goes through a major wireless infrastructure buildout…

But as we can see in the chart below, the number of 4G subscribers will peak this year and is at the earliest stages of decline. And 5G is the reason why… It’s coming a couple of years earlier than previous generations. 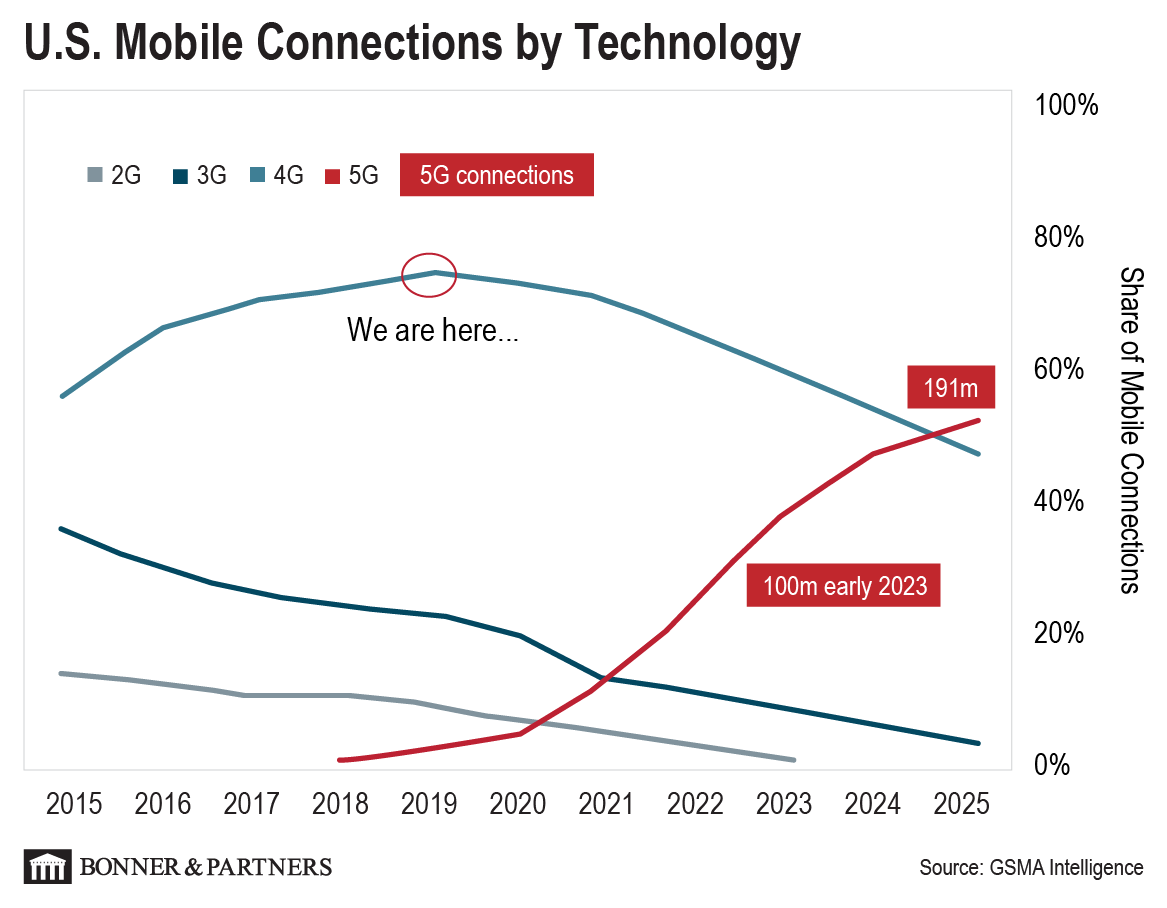 You see, the world now has an insatiable demand for more connectivity. More internet browsing, more messages, more video chats, more streaming video… all on wireless-connected smartphones and tablets. This demand has accelerated the migration from 4G to 5G.

What’s more, 4G wireless networks are congested… resulting in poor speeds, dropped calls, and frustrated customers. As a result, subscriber growth on 5G networks will be on an exponential growth trajectory over the next five years; it’s scheduled to overtake 4G subscribers by 2024.

And for good reason… 5G technology promises connection speeds up to 1,000 times faster than what we have today. For perspective, with 5G, it’ll take mere seconds to download a feature-length movie – something that would take close to an hour to do today.

And to make this 5G network construction happen as fast as possible, wireless carriers are going to have to rely on infrastructure companies to support this undertaking. Naturally, this will translate into tremendous investment in those companies… and windfall profits for early investors.

Of course, the bigger question regarding 5G is whether anyone will use it. After all, new technologies live and die by their mainstream adoption.

With 5G, this is a no-brainer. Far beyond simply making our connection speeds faster, the technology will lay the groundwork for entirely new innovations…

Self-driving cars will be connected in real time over wireless networks.

Companies will be piloting trucks for logistics remotely, just as drones can be flown from halfway around the world over satellite networks.

We’ll be able to surf the internet and make phone calls while riding on a high-speed train up to 310 miles per hour.

Consumers will be able to “sit in” on meetings by projecting themselves using holographic images in real time with no video or audio delay.

And there will effectively be no latency (delay) over 5G networks. Latency will drop by 99% from more than 100 milliseconds down to a mere millisecond. A latency reduction like this would enable a doctor to operate on a patient with robotic surgery… over a wireless network.

Clearly, 5G wireless networking technology is not just evolutionary, it’s revolutionary. And it’s all happening right now… this year – not two or three years from now.

AT&T announced that it would begin offering 5G to customers in a dozen cities by the end of the year, with notable deployments in Dallas, Atlanta, and Waco, Texas.

And Verizon recently announced that 5G home wireless services would be available for a handful of cities starting next month.

All told, 5G will unlock $12 trillion in wealth worldwide. In the U.S. alone, I estimate 5G will create some 3 million jobs and result in $500 billion in additional GDP growth.

The time to be invested in companies associated with the 5G buildout isn’t in the next year or so… It’s now.

P.S. I believe three tiny tech stocks have the potential to soar triple-digits as soon as November 14. That’s why I wrote an urgent research report that shows you how to find them… and explains why now’s the perfect time to get in on the action.

I’m calling it “The Brown Blueprint,” and you can learn how to access it here…