Bitcoin is back in the headlines, but this time it’s not because of Elon Musk.

Now, it’s because China has been targeting long-term market trends with short-term solutions.

First, it was the falling dollar, then rising commodity prices, and now news of its crackdown on crypto mining on Monday sent bitcoin back into a freefall.

Bitcoin is prone to volatility shocks, and the latest was driven by headlines once again – a perfect example of sell first, ask questions later.

But, asking the right questions when investors see their 100% YTD returns melt to nothing is easier said than done. Especially when Monday’s headlines read, “China shuts down 90% of crypto mining capacity.”

Unfortunately, fear usually takes over right at the wrong time…

The fear angle could be summed up by none other than everyone’s favorite mainstream “talking head” Jim Cramer, who said, “I sold almost all of my bitcoin. Don’t need it… I’m saying that this is not going up because of structural reasons.”

Cramer happened to leave out that Chinese bitcoin miners have already been packing up and moving out. This makes the argument that China’s crackdown on mining will somehow “structurally” affect bitcoin completely moot.

The bottom line for bitcoin is that it doesn’t matter if China shuts down its mining operations because the crypto mining migration is well underway. Trusting an authoritarian regime is just bad for business, so miners are flocking to places that have the energy resources and freedom all in one area – like Texas, Kentucky, and Canada.

It’s the invisible hand of the economy at play, meaning that resources and projects often shift to areas where they’re most valued.

Some are calling this the “great mining migration”, which will eventually create tons of opportunities for growth in sectors like energy and digital real estate.

Bitcoin Kept Its Line in the Sand

From a fundamental point of view though, the bitcoin selloff was a clear overreaction.

But bitcoin falling below $30K was important… This price point has become a line in the sand for many investors.

Amid the carnage, crypto investor Mike Novogratz remarked, “We had China really be much more forceful in their idea to ban cryptocurrency. That’s created a retail deleveraging”… Implying bitcoin “whales” or institutional investors, weren’t selling. If he was right… bitcoin wouldn’t stay below $30K for long… and it didn’t.

During these types of extreme meltdowns, I follow an indicator that tracks the difference between bitcoin prices on the Coinbase exchange and those on smaller exchanges like Bitfinex.

When institutional investors buy bitcoin, they tend to do it on Coinbase. That’s why the volume traded on Coinbase is almost three times higher than any other exchange. And at extremes, this indicator leads prices.

The chart below shows how this relationship played out on Tuesday as bitcoin broke below $30K… the green line is the price of bitcoin, and the black dotted line is an index that tracks the price difference between Coinbase and Bitfinex. 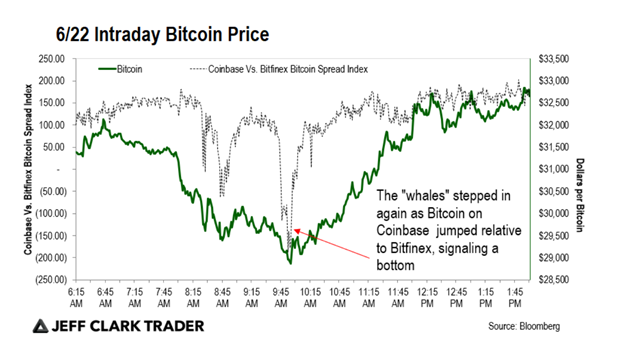 Around 10 a.m. on Tuesday, right at the lows of the day, that index exploded. Bitcoin subsequently bottomed, and is now comfortably back above $30K, and trading 14% above its lows on Tuesday.

What bitcoin whales are doing is important – they determine whether prices will stabilize and whether the trend in institutional adoption continues.

Evidence shows they keep buying at the low $30K level. Since bitcoin’s initial collapse from $65K, this is now the fourth test of this price level. The more it builds from here, the stronger the future price movement becomes.

Considering all of the negativity recently, regaining this level would probably send it to new highs and be the buying opportunity many have missed out on.

But for the sake of the market at large… I hope bitcoin holds the line, because a complete collapse could be systemic.

In today’s mailbag, Market Minute subscriber Mike answers Eric’s question from last week’s essay on whether readers will be buying the gold dip on the negative Fed reaction…

Albeit your analysis in regard to gold’s moving averages are about to cross, as I write this, gold is trading at $1,770 an ounce on the market. It does seem that it can move lower back towards the $1,680 level, and if that is broken, then $1,500.

After the FOMC meeting on Wednesday, investors are flocking to the U.S. dollar, and we’ll probably see a short-term move in dollar strength. For now, I feel prices are headed lower in gold until sentiment changes again. I think it’s still too early to jump into gold.

I’m a new Alliance member. Nevertheless, I’ve been reading and following Jeff for a while now and I will go with Mr. Clark every time over the “talking heads.” Some provide valid information at times, but for the most part they’re for “entertainment” purposes only.