Jeff’s Note: Today, I want to introduce the latest member of the Market Minute team…

Across nearly 20 years of experience, Clint Brewer has provided investment research for some of the largest institutions in the world and managed more than $2 billion in assets.

Drawing on a combination of technical, quantitative, and fundamental analysis, Clint is focused on finding the best trading opportunities in the market. One of his specialties is determining the short- to intermediate-term direction of the market, which will be a recurring theme in his essays.

And today, he’s here to show you a new way to track market sentiment that may surprise you…

After all, the index kept slicing through key levels like the 50-day moving average (MA). And nothing could halt the downside.

It seemed like the next big decline was upon us.

Then, the S&P 500 suddenly found its footing and rallied.

Even accounting for yesterday’s pullback following consumer inflation data, the index has tacked on 3% in just five days.

Last Wednesday, I showed you how to use participation in a stock market’s trend (also known as breadth) to spot a potential change in direction…

That’s exactly what happened. By one breadth measure, stocks had become the most oversold in over two years!

But breadth factors shouldn’t be the only tool in your market timing toolkit.

Along with breadth, assessing the mood of investors can help you trade in the right direction of the market.

Relative levels of bullishness or bearishness among the crowd gives us a clue when a trend might continue or reverse.

For example, excessive bullishness often indicates that an uptrend has gone too far. After all, if everyone who could buy stocks has turned bullish and bought, then who’s left to drive share prices higher?

However, shortly afterwards the market moved lower. There simply weren’t enough buyers to sustain the rally.

This is just one way to track investor sentiment. There are others, like surveys of retail and institutional investors. Some traders prefer to track the stock market volatility through the Volatility Index (VIX).

The action in cryptocurrencies has quickly become one of my favorite ways to take the temperature of the stock market. I can’t think of another asset class where fear and greed are on such full display.

To see what I mean, look at bitcoin compared to the S&P 500 since the middle of last year… 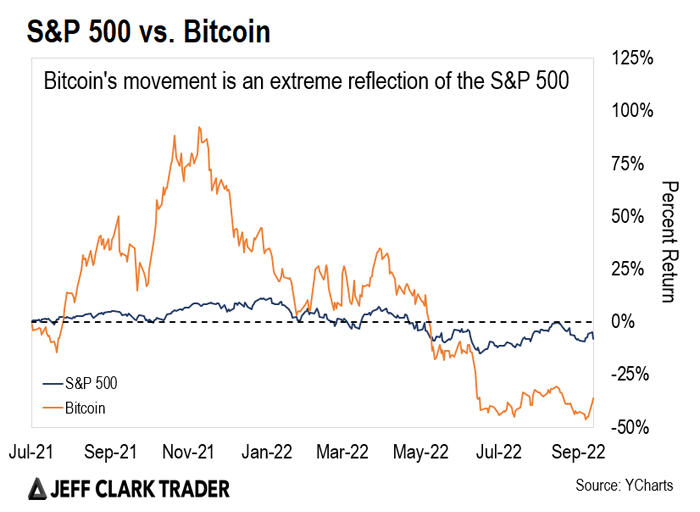 Bitcoin is like a supercharged version of the stock market, in either direction. When the S&P 500 is rallying, bitcoin is flying high. But when stocks struggle, bitcoin crashes.

That’s why the price action in bitcoin can provide useful information about investor attitudes toward other risky assets, including stocks.

Now let me show you why the recent action in bitcoin has my attention.

Here’s the chart for the year-to-date period… 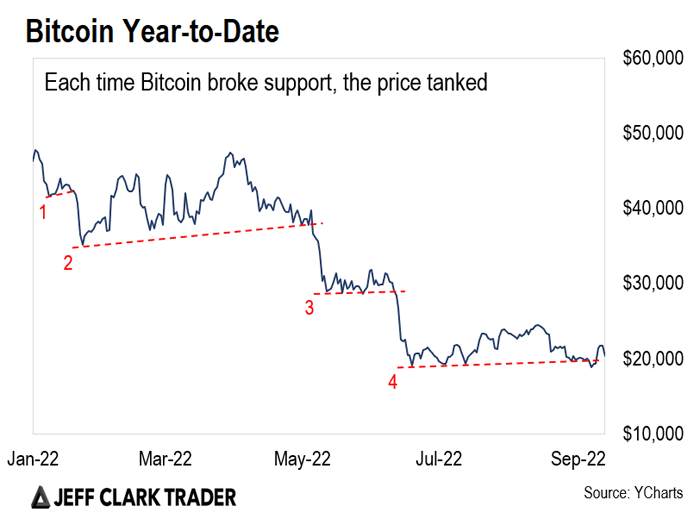 In points 1, 2, and 3, you can see where bitcoin broke support (dotted line) – leading to massive declines each time. Stocks behaved badly during each episode as well.

But look at what happened last week at point 4, when bitcoin had another major loss of key support.

Just when it appeared that the next bearish plunge was underway, prices quickly staged a huge reversal.

That’s what you call a bear trap… so far.

If the rally holds, that’s a key sign that risk sentiment is improving.

Then, I would take a harder look at stock market sectors, like biotech, that could benefit from the return of bullishness.

However, let’s not discount the recent low in bitcoin around $18,500 – an important level for the stock market.

Another breakdown is a bearish sign that traders continue to shun risky assets, which I expect would weigh on stocks as well.

So even if you don’t trade cryptocurrencies, keeping them on your radar is a terrific way to gauge the temperature of investors and stay on the right side of the trend.

P.S. Last week, I promised that I would reveal the one key sector I have on watch. But as a tactical trader, I’m patiently waiting for that sector to trigger a trade based on my system… So you’ll have to stay tuned!

Thanks for the HPQ trade today. I’ve been trading around a core 200-share position since spring. I saw the same setup forming in the chart on Wednesday and bought the October calls at $1.40. I’m glad to see you have confirmed my logic!

I am definitely learning from you, and I really appreciate your work. Thanks!

I’m very impressed with these pages. Thank you very much. I hope I can make money along with Jeff.