Coffee has been on a tear lately…

You might remember me writing to you about coffee back in early April. Here’s what I said at the time…

When coffee made a sustained move below its 20-day EMA last November, it kicked off a six-month-long decline in the price.

Yes… there was some choppy action in January, when it looked like coffee could be ready to rally. But, the price couldn’t hold above its 20-day EMA for more than a day or two. And the decline resumed.

Now, though, the chart looks quite similar to the pattern that formed the low last September. The price of coffee has been falling for several months. It has bounced off a multi-year low. And it just crossed above its 20-day EMA.

I’ll admit… I was a bit early on that idea. Coffee wound up chopping around for another month before it really broke out. And, it took a few more pops above the 20-day EMA for the rally to stick. But, if you took my advice and only bought coffee when it made a sustained move above its 20-day EMA, you made a big gain.

However, I hope you took it off the table. Because coffee looks like it has a bit more work to do on the downside.

Take a look at this daily chart of coffee, plotted along with its 20-day EMA and various momentum indicators… 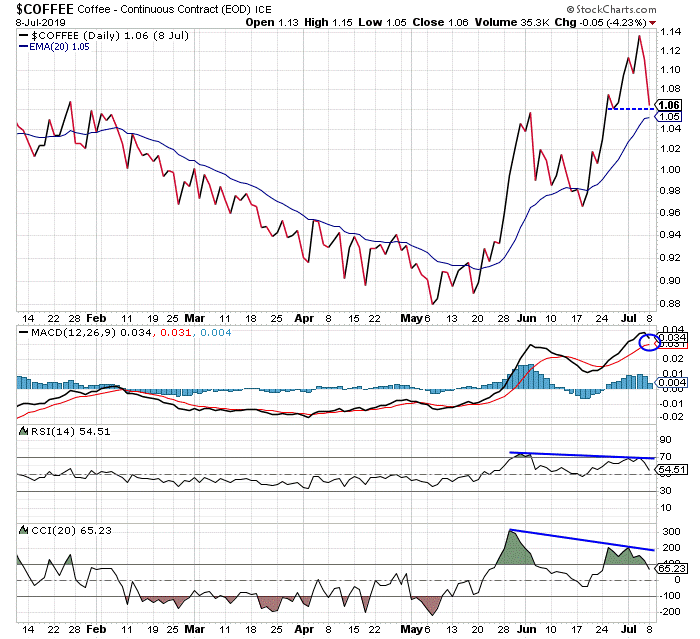 There’s quite a bit going on with this chart, so let’s walk through it one step at a time.

First, note the negative divergence on the RSI and CCI momentum indicators. When these indicators make lower highs, especially when the asset they’re tracking makes higher highs, it suggests a loss of momentum on that higher move – typically a bearish sign.

We aren’t getting that same divergence on the MACD. But, take a look at the black and red lines that make up the indicator.

The MACD is about to show a “bearish cross” – where the black line crosses below the red line. That’s another warning sign of lower prices ahead.

The last thing I’d like to point out is the major support level on the chart – at the most recent low around $1.06. Coffee closed on Tuesday just slightly above that support line.

That puts it within spitting distance of its 20-day EMA. And, as I’ve covered, that’s an important short-term support/resistance level.

If coffee breaches that support line, it could fall all the way down to its next support at around $1.01 – well past the 20-day EMA. There’s always the chance it bounces off that support. But, given the negative divergence on the momentum indicators, and the imminent “bearish cross” on the MACD, I think it’s more likely that coffee falls further.

If you’re still hanging onto the coffee trade I mentioned in April, you might want to take your gains off the table.

P.S. Yesterday I had a meeting with my video team, and they told me about a new feature we’ll be using in tomorrow’s Open Line Q&A…

Unlike our previous Q&As, I’ll be able to “share my screen” with you. So, for example, if you have a question about a certain sector or trading strategy, I’ll be able to show you an example in real time… using my own tools. (If you attended my Mastermind sessions earlier this year, this will be familiar.)

We’re only one day away from the Q&A, and I couldn’t be more excited. If you haven’t submitted your questions yet, do so here right now.

Since joining Jeff’s Delta Report about a month and a half ago, I am tickled pink by the results and thoroughness of his service. Sitting on the sidelines, for now, makes absolutely good sense. Wait for the market to “come to us!” As Brad Pitt so famously said in Ocean’s Eleven, the first thing you do is “leave your emotions at the door!”

That way you won’t lose your shorts (no pun intended). One last important item, having Jeff literally hold our hand along the way through trades is a BIG help. I now have a sense of “hope” towards the market, and the results are proof for the pudding. Thanks again, Jeff, for all that you do.

I never usually contact any service I purchase. Believe me when I tell you I have purchased a lot of them. Your options trading service is the most rewarding I have ever encountered. I would consider myself pretty seasoned as I have been “learning the hard way” for years but always enjoy the experience. To me, the morning market takes and the daily market feelers gives us the extra edge I’ve needed. Thanks for giving me what I paid for.

It is hard to tell you how much I appreciate your service!

I have been with you only six weeks but, my god, your intuition, advice, and personable messages are downright awesome!

I’m fascinated by technical analysis and trying to understand and learn some things from you… Thank you!

I’m enjoying my subscription and have made a few dollars while doing it. The USO trade went well. I was in OIH, too. I trade very small, but watch the percentage gains carefully.

At the moment, I’m watching CORN for a possible monster trade caused by problems with planting the corn crop. Also, there are some problems overseas with their crop. This one could be a black swan and, if so, will be worth a lot of money if I can position properly ahead of time.