Friday was likely your last chance to take profits on the gold stock rally.

Gold stocks have enjoyed a remarkable run this year. After bottoming at the end of May, the VanEck Vectors Gold Miners ETF (GDX) started a rapid ascent. At its peak, GDX gained about 33% in just over two months.

But the rally was too much, too fast. Now it’s running on fumes. And signs that it’s peaked just keep piling up…

Today, I’ll tell you why I think the gold stock rally will soon end. If you’re sitting on gold stock gains and haven’t yet taken a profit, you’ll want to read today’s essay closely… and be ready to trade on the opening bell Monday.

The biggest warning sign I’m seeing right now is in the GDX/Gold ratio.

(Jeff sent this chart to his subscribers on Thursday evening, warning them about this same dynamic. Subscribers can catch up, and act on a new trade recommendation, right here.)

The 9-day exponential moving average (EMA) is an important short-term signal for this ratio. When the ratio makes a sustained move below the 9-day EMA (red arrows), that shifts the short-term momentum to bearish.

The word “sustained” is important here. As you can see, the ratio dipped below the 9-day EMA back at the end of July, then bounced right back up. It was a false signal.

But take a close look at the ratio’s performance since then. It failed to make a higher high after bouncing back. And just this past week, it fell through the 9-day EMA again.

The daily chart of GDX looks bearish, too… 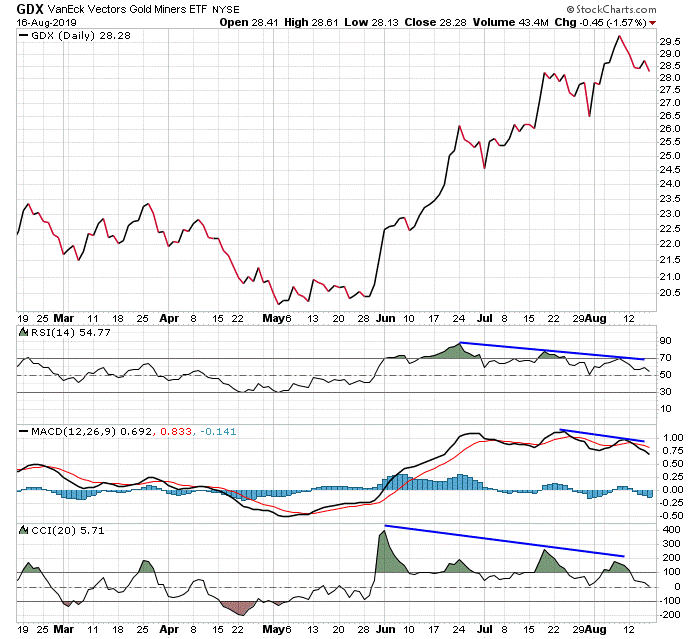 Here we’re seeing significant negative divergence on the various momentum indicators below the chart. That happens when the price of a stock or index makes higher highs, while the indicators make lower highs.

In other words, momentum is drying up. It seems like the only ones left at the gold stock party are those that came too late…

And as if that all weren’t enough, let’s take another look at the Commitments of Traders (COT) report.

As Jeff’s said for the past few weeks, commercial traders (“the smart money”) have amassed one of the biggest net short positions on gold in recent memory: 324,000 futures contracts. Anything over 150,000 contracts tends to mean the smart money is betting on a fall.

Now, the smart money tends to be early. But they tend to be right, too.

In this week’s Delta Report, Jeff showed what happened next…

Back then, gold had rallied nearly 30% in eight months. It had gone from a depressed, beaten-down, forgotten old relic at the start of 2016, to the bright shining star of the financial markets by August 2016. Commercial traders, who were net short only 5,000 gold futures contracts in December 2015, were net short 340,000 contracts – their largest short position in 20 years – by the following August.

Less than two months later, gold was $125 per ounce cheaper. And by the end of the year, gold had given up nearly all of its gains. It was down $250 per ounce from its peak in August.

Contrarian trades are hard, especially when you’re early on them. And I’m sure that anyone following the COT story is wishing they waited until now to short gold.

But I think the smart money – and anyone following them – will ultimately be proven correct.

If you have profits on gold stocks right now, Monday might be your last chance to take them. And if your short gold trade hasn’t worked out yet, hang tight. There are simply too many signs that this rally is on its way out.

P.S. GDX is one of the stocks in Jeff’s 3-Stock Retirement Blueprint. That’s because, aside from being a good long-term holding, gold and gold stocks are especially volatile right now. And that makes them great for trading…

In fact, three of the recent winning positions in Jeff’s track record were GDX trades. They were all doubles or better. And with volatility ramping up the past couple weeks, he thinks that those wins are just a taste of what’s to come.

You can learn more, and claim a $19-per-year subscription, right here.