The S&P 500 has fallen for seven weeks straight. The index was above 4600 near the end of April.

It closed on Friday at 3900 – a drop of more than 15%. And it registers as one of the worst seven-week performances for the stock market… ever.

During this entire period, as the broad stock market was falling many of the technical indicators we follow were dropping right along with it.

The S&P 500 would fall to a lower low, and all the momentum indicators fell to lower lows as well.

It’s subtle. But if you look closely at the following chart of the S&P 500, you can see some positive divergence on the technical indicators at the bottom (MACD, RSI, and CCI)… 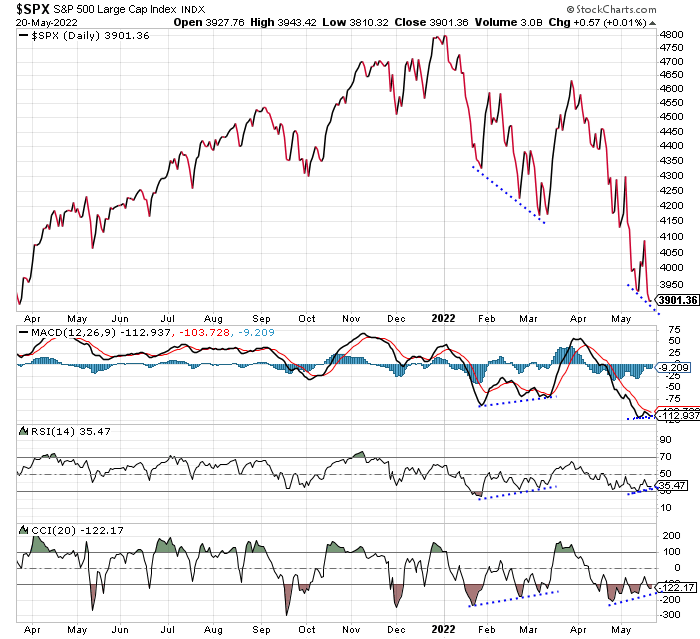 While the index dropped to a lower low, technical indicators like the MACD, RSI, and CCI all held above their previous lows.

This sort of positive divergence is often an early warning sign of an impending change of trend from bearish to bullish.

Indeed, there was positive divergence on this chart back in mid-March. That set the stage for a two-week-long rally that powered the S&P 500 10% higher.

For most of the past seven weeks, I’ve been watching this daily chart of the S&P 500 for signs of positive divergence that could help set the stage for another oversold bounce, or perhaps a more significant rally phase. And up until last week, the signs just weren’t there.

Now though, there’s a reason for bullish traders to be hopeful.

Of course, it’s no guarantee. A continued decline in the S&P 500 this week could easily push the technical momentum indicators to lower lows, thereby wiping out the positive divergence.

So, there’s still plenty of reason to be cautious.

But for the first time since the current decline phase started at the end of March, the technical indicators are holding above their previous lows.

That’s a potentially bullish sign. And it’s reason enough to dip a cautious toe back into the market’s water.

I’ve already subscribed about a week ago. I’ve never traded options but have done a lot of reading on them. However, it’s been a while. If I’m understanding this correctly, Jeff will use the ticker symbol GDX for every recommendation and he will tell us when to place it and when we should get out.

I reopened a TD Ameritrade account today, and I’m excited to finally have a coach whose record speaks for itself to learn from.