Oh sure, the price of the shiny, yellow metal has been hit hard over the past few weeks – falling from over $2,050 per ounce in early March, to under $1,900 today.

That’s a drop of 7% in just seven weeks. And with that drop, many investors have turned sour on the metal.

But for folks looking for an inflation hedge, a store of value, or just another way to protect themselves from the impending decline of the U.S. dollar – buying gold today offers a far better deal than where it was a few weeks ago.

We turned cautious on gold last month, when the “smart money” built up a large, short position in gold futures contracts.

We reiterated that cautious stance three weeks ago, when the gold stocks started to lag behind the price action in the metal.

But now, after a 7% decline – and a sharp turn in investor sentiment from bullish to bearish – gold appears attractive again.

Take a look at this GOLD chart… 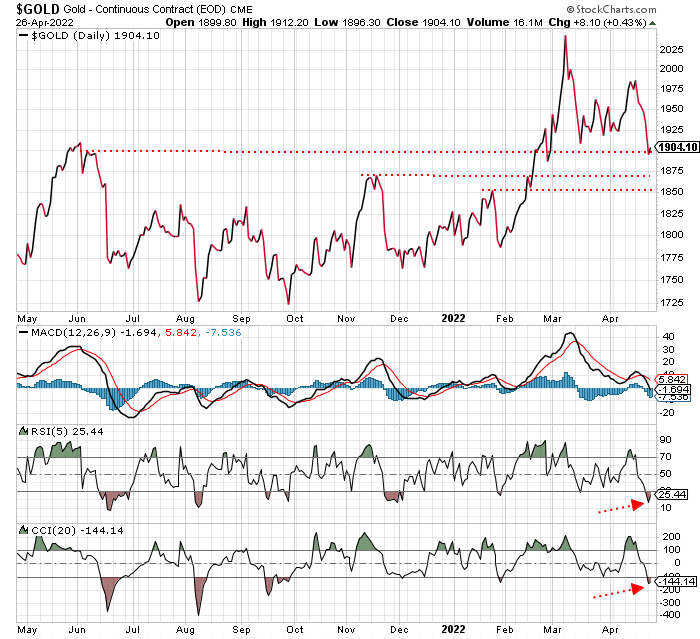 Gold closed Tuesday right on the support line at $1,900.

There’s additional support just below at $1,875, and then at $1,850. Technical buyers are likely to step up if gold dips to either of those levels. So, that should limit the downside risk.

More importantly is the emerging oversold condition on the technical indicators at the bottom of the chart (MACD, RSI, and CCI).

They’re not quite at levels that’ve signaled an end to previous declines in the gold price… But they’re getting close.

And with the Fed widely expected to raise interest rates following its meeting next week, it’s reasonable to expect the price of gold to dip a bit more between now and next Wednesday.

Traders should view that decline as a buying opportunity.

We probably haven’t seen the end of gold’s short-term decline phase just yet. But we’re certainly closer to the end than to the beginning.

Traders who held off buying gold based on my cautious comments over the past few weeks now have a much better price at which to put money to work in the yellow metal.

Do you buy gold? If so, do you use it as a hedge against inflation?