Gold has been one of the most frustrating macro trades this year.

On the surface, the macro backdrop should’ve lined up perfectly for a sustained period of easy gains.

Commodities as an asset class have soared and inflation is rampant. Yet, gold has meandered all year – except for its run-up during the Russian war in Ukraine.

Now, those gains have long faded and gold finds itself flat on the year.

And whenever an asset lacks eye-catching gains, investors start to ignore it…

At exactly the wrong time.

To understand gold, it must be looked at as a store of value that rises over time with the optionality of big, sporadic gains – not as a purely speculative asset.

Meaning, most of the time gold is slow and boring. But sometimes it catches everyone by surprise and goes on a big run.

And that time is fast approaching.

The alternative currency portion of its returns is the reason gold’s performance has been suppressed – the result of a strong dollar and rising interest rates.

Since this part of gold’s returns has an inverse relationship with these factors, gold hasn’t been able to go on a sustained run.

But it hasn’t broken it either.

The chart below shows the performance of widely tracked currencies in 2022 and the change in treasury bonds since the start of the year. 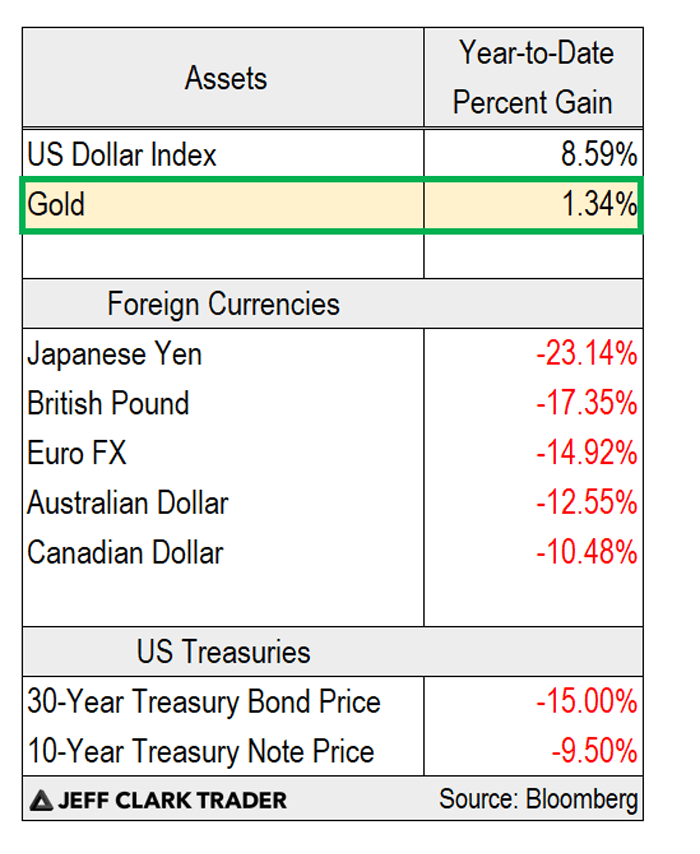 From a currency perspective, gold has more than held its own even though these macro factors have held it down.

But these factors can easily be hedged away. For example, on March 11 I recommended combining gold with a short iShares 20 Plus Year Treasury Bond ETF (TLT) position.

The biggest reason for the success of that position has been the Fed raising interest rates, combined with the market pricing in more (and even bigger) rate hikes throughout the year.

The rise in rates has also played a big role in the strength of the U.S. dollar.

While our central bank is raising rates at every Federal Open Market Committee (FOMC), others around the world are not nearly as aggressive.

The divergence in global monetary policy and the weak economic environment has crushed global currencies versus the dollar.

The dollar also has a “flight to safety” component as the world’s reserve currency.

We saw this play out during the pandemic when demand soared as global central banks stockpiled the dollar to avoid their own currencies from collapsing.

But right now, gold is out of excuses…

Both the dollar and interest rates are off their highs since the last FOMC meeting on June 15.

That won’t remain the case for long.

A break above this range will trigger the buyers to start stepping in from a technical point of view.

But from a macro point of view, a breakout above $1,860 could be a big one. Especially, given how the two main factors keeping gold from rallying this year have eased off.

To play this, I would add to both positions here…

This combined position should be a mainstay in your portfolio. Every time gold is weak, buy more. And every time rates ease, short more TLT.

At the very least, it’ll outperform stocks for the foreseeable future… and with the optionality for big gains that have the tendency to catch everyone by surprise.

Is gold still part of your inflation hedge toolkit?