Mike’s note: Often, trading volatile assets like bitcoin can feel like throwing darts at a board. Especially when an announcement by Tesla shoots the price skyward in a matter of minutes.

I was talking about this with my friend and colleague Eric Shamilov this week, and he opened my eyes to a momentum-based trading strategy that was so simple, and so useful, I knew I had to share it with you.

Read on to learn how you can cut through the noise, and start trading bitcoin profitably…

Momentum is the “biggest embarrassment to the theory” of efficient markets.

The efficient market hypothesis states that all available information about an asset is reflected in its price at all times. So, Fama’s saying that if markets are truly efficient, there should be no reason for an asset price to rise simply because of momentum.

Yet, they do all the time… And bitcoin is the ultimate example. 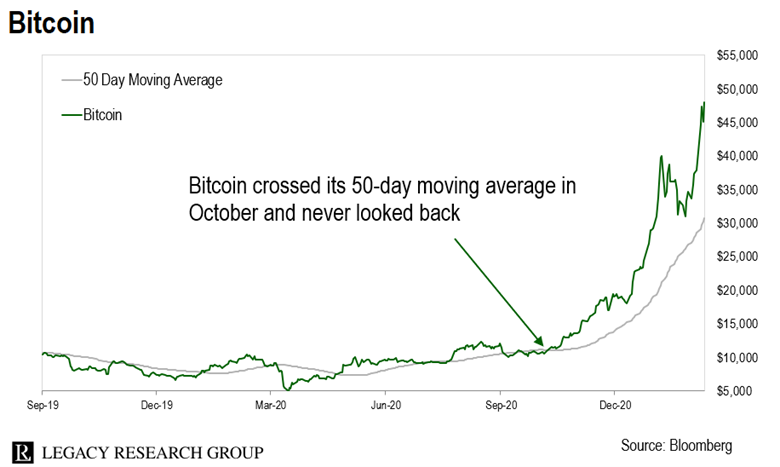 On October 12, bitcoin started a new uptrend from the March lows by crossing its 50-day moving average. It’s gained 275% since.

There is no other macro asset that provides these types of returns simply by riding the wave of momentum. When it comes to bitcoin, the trend is truly your friend.

Very few assets behave like this. One reason may be that bitcoin is still relatively young, and global adoption seems to just be taking off. And, because of bitcoin’s cap on supply, more dollars are chasing fewer available bitcoins.

Still, because bitcoin is so different from every other asset, it’s difficult to try to time trades in the cryptocurrency, or determine when you should even invest in the first place.

So, in today’s essay, I’ll show you a few precise levels that you can use to trade bitcoin – or, simply determine the best time to place your stake in the fast-growing cryptocurrency trend…

The Key Levels To Trade Bitcoin

For all of its anxiety-inducing headlines, analysis, and complicated viewpoints, I’ve found over time that bitcoin simply boils down to short-term momentum.

A vast majority of bitcoin’s returns are generated above the short-term trend. If bitcoin doesn’t stay above its short-term trend, it runs the risk of a fast and brutal decline. (Anyone who’s woken up to a 25% drawdown in their bitcoin holdings knows what I mean.)

So, with this in mind, we can optimize our bitcoin returns by using a simple momentum strategy…

Check out the chart below. The table below compares bitcoin’s annualized returns when holding above various trendlines… 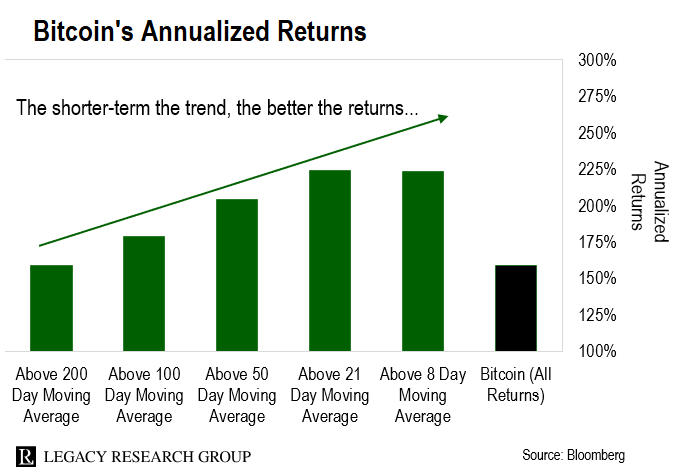 That suggests using short-term trends is the easiest way to trade bitcoin, avoid ugly downturns, and get in when the price is right.

At this point, bitcoin has spent three months above its 50-day moving average… One of the longest stretches above that level of its existence.

Or, for more conservative traders, simply hold it until the price crosses below the 50-day moving average. A cross below that level would signal significant downside.

Trading momentum assets like bitcoin requires a momentum-based strategy. Some traders may even argue that you don’t need anything else.

This simple framework should help you sleep well at night – knowing exactly what to look for, when to buy, and when to sell bitcoin for maximum profit potential… Without stressing over headlines and day-to-day price action.

Are you currently trading any bitcoin? If so, would you use Eric’s approach?

Let us know your thoughts – and any questions you may have for Jeff or Eric – at [email protected].