As we pointed out last week, and two weeks before that, call option prices on the Volatility Index (VIX) were much more expensive than VIX put options.

This sort of condition almost always leads to a higher VIX. And, a higher VIX usually goes along with a falling stock market.

It took a little longer than usual for the prediction to play out. But, we finally got the stock market to sell off the VIX option prices that were forecast. The S&P 500 lost 150 points in a three-day decline that started last Thursday.

On Tuesday morning, though, VIX option prices had changed their tune. The VIX puts that expire on September 16 were more expensive than the equivalent call options. So, I told my Delta Direct subscribers that the crystal ball was now telling us the market was setting up for a quick bounce.

We got that bounce on Wednesday when the S&P traded up as much as 92 points.

So, with the crystal ball seeming to be back on track, let’s take another look into it today and see if we can get an idea of what to expect in the weeks ahead…

The prices for the equivalent calls and puts are the same. Option traders don’t see a higher probability for a move in one direction or the other. So, there’s no edge here.

The option prices are telling us the market is not likely to be meaningfully higher or lower between now and when these options expire on September 16.

But, the October series of options are telling a different story…

Traders are willing to pay nearly 3X the price to buy VIX calls versus VIX puts. This is similar to the condition that warned us last week that the stock market was ready to fall.

So, if we’re going to gauge the market forecast by the premium on VIX options, it looks to me like stocks are going to chop around for the next several days.

Then, we’ll head lower into October.

Mr. Clark, I watched you and your son demonstrate options. It was truly educational for me and such a nice way of explaining to a complete novice in the stock market. I joined Delta Report and then realized that I wasn’t approved to trade options. I’m working on it now and am looking forward to participating. Patience is needed.

Blessings to you and your son. I’m hoping for a very successful college career for him.

According to the financial experts at the “Maganomics Institute,” Americans could be on the verge of one of the greatest stock market surges in history – and they’ve partnered with one of America’s leading news networks to spread the word in this important roundtable discussion.

What makes this a must-see for every American is the No. 1 investment the “Maganomics Institute” claims is behind the great American comeback…

This is something no one in the mainstream media sees coming.

Take a few moments to watch it below and decide for yourself. 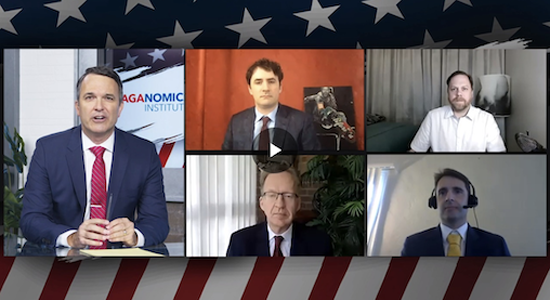