One way or another, the S&P 500 is going to retest the lows it made earlier this month. That “retest” will set the stage for a solid year-end rally. So, I’m happy to buy into a decline below 2725 on the S&P 500. But, I just don’t think we’re set up to see that sort of decline just yet.

Instead, I think the stock market is going to make one more surge higher. It’s going to convince folks that the worst of the decline is over. It’s going to sucker cash-heavy investors into chasing stocks higher.

Then, just as it looks like stocks are ready to blast higher, and all the talking heads in the financial media are screaming about the year-end rally, we’ll get a retest of the early October lows.

That’s when it will be time to buy with both fists.

Until then, tread lightly. Be willing to sit on losses in anticipation of a year-end rally. But, don’t get too aggressive with long-side bets just yet. The next few weeks are going to be a bumpy ride. 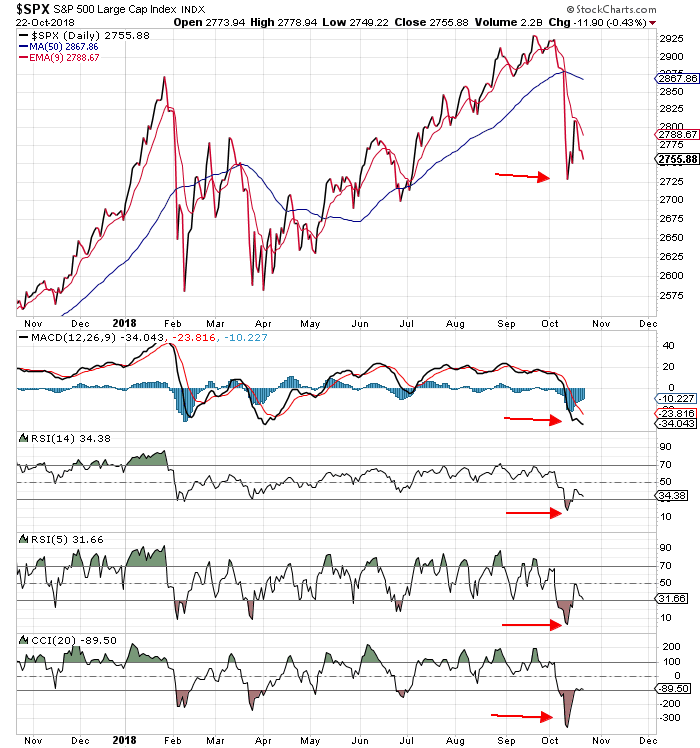 The easiest thing would be for the market to just drop down right now and retest the 2725 level from earlier this month. Technical conditions are oversold enough that such a retest would mark an important bottom for the market. Then we could get on with a decent rally going into the end of the year.

But the market rarely makes it so easy.

Take a look at the action back during the February correction. Back then, the market took a full six weeks before it dropped back down and retested the February lows.

Similar action this time would have the S&P 500 rallying off of current levels. The index might even get high enough to challenge the resistance of its 50-day moving average line – at about 2850 or so – before dropping back down to retest the recent lows.

I think the latter scenario is the most likely at this point.

Either way, though, I’m looking to buy at 2725 or slightly below.

Do you see the stock market rallying before the end of the year? How do you plan on trading during that time?

As always, submit your trading questions, stories, or suggestions at [email protected]