Hurray! The S&P 500 rallied to a new all-time high yesterday.

The index popped just above the 2873 level intraday – which topped the 2872.87 intraday high made back on January 26.

But the new high happened while lots of technical indicators stretched into overbought territory and were diverging negatively from the action in the index. So, while the bulls were getting all excited about the prospects of a “breakout” move to the upside, I started adding some short exposure.

You see, I think yesterday’s pop to new highs may prove to be a bull trap.

Among other concerns that have me leaning bearish, the look of the CBOE Volatility Index (VIX) is one of the biggest.

Here’s a look at the 60-minute chart… 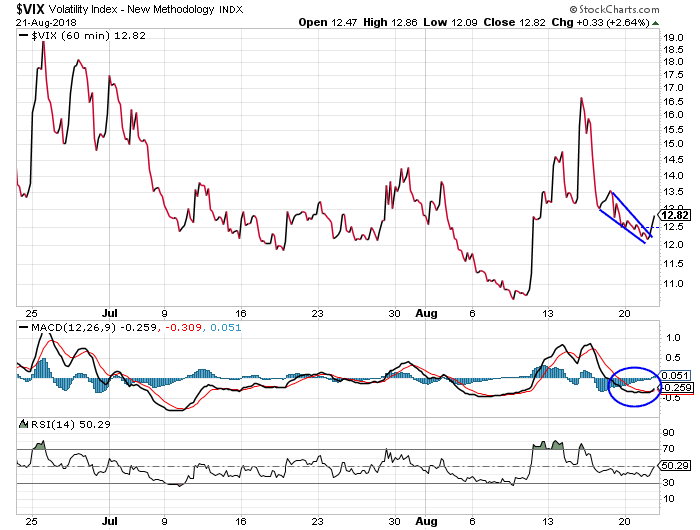 Shortly after the market made its all-time high, the VIX broke out to the upside of a falling wedge pattern.

The MACD momentum indicator below the chart is in oversold territory and just started to curl higher at the end of the day yesterday. This tells me the upside breakout for the VIX has just begun.

In other words, volatility is headed higher.

Now, let’s look at the daily chart of the VIX…

This chart shows the potential for an inverse head and shoulders pattern to form.

Now, the breakout of the wedge pattern on the 60-minute chart should lead to a quick spike higher in the VIX. And if that spike manages to rally the VIX above 15, that will create a breakout from the inverse head and shoulders pattern on the daily chart. That would then give us an upside target of about 18 or so on the VIX. (To calculate the upside target of an inverse head and shoulders pattern, take the difference between the point of the head and the “neckline” that connects the two shoulders. In this case, it’s 3, giving us an upside target of 18 after a rally past the breakout point of 15.)

That’s certainly a lot of “ifs.” But it shows the potential for a larger rise in the VIX, which would likely correlate to a larger decline in the stock market.

Things may not play out this way. And I’m not suggesting you leverage the farm to take on short positions.

But aggressive traders should consider having some short exposure here, just in case the market stalls and some of the bearish setups start to play out.

Light mailbag this week… Unusually so.

Readers, what’s your strategy for these market conditions? What stops this bull market?

As always, let us know here. And we’re happy to hear your option trading questions – and any suggestions for the Minute – as well.