By the middle of the day yesterday, the S&P 500 had been higher for four straight sessions. And, it wasn’t just a series of tiny gains. It’s been four straight days of “rip your face off” rallies. The index rallied over 130 points during this stretch. That was an average gain of more than 1% each day.

That doesn’t happen often. And, it had me thinking that the market might just keep plowing higher into the end of the month.

But, then I took a look at the 15-minute chart of the S&P 500 and decided the odds favored a decline today.

We can look for the same patterns we look for on the daily charts – and trade the same way. But, the time periods are condensed. 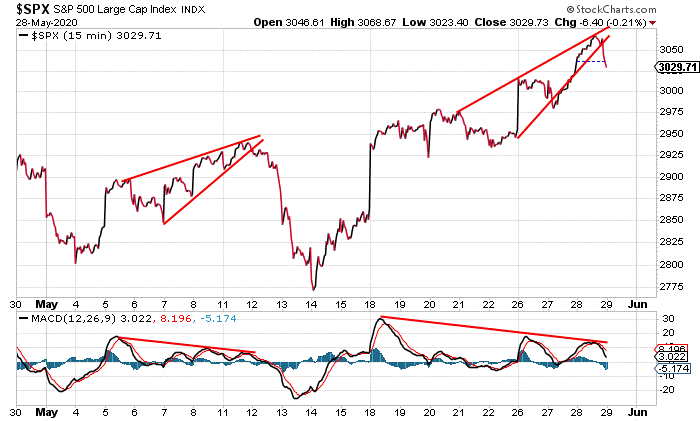 This chart shows two bearish rising wedge patterns. The bear wedges have negative divergence on the MACD momentum indicator – which is an early warning sign that a rally phase is nearing an end.

The first bearish wedge – which started to form on May 6 – took four trading days to complete. The S&P broke down from the wedge and traders who spotted this pattern on the intraday chart ahead of time had a nice chance to profit on the decline.

This week’s rally formed another bearish rising wedge pattern with negative divergence. The index broke down from the wedge yesterday afternoon. So, if we’re trying to figure out if the market is going to finish the month of May with another big rally day, based on this setup I’d have to say “NO.” It looks to me like the market is poised for a brief decline.

Of course, I could be wrong. Technical analysis is more of an art than an exact science. But, that’s how I’m trading it.

The point of this essay, though, is to point out that if you’re looking to make ultra-short-term trades, then you need to use chart patterns that fit the time pattern you’re trading. A one-year daily chart of the S&P 500 isn’t going to help you much in figuring out what the market is likely to do today.

Shortening your time frame and using intraday charts – like this 15-minute chart – will give you a better idea of the potential short-term direction.

P.S. Just minutes before the close yesterday, the S&P 500 gave back all the gains from the day, and closed lower. Buying and holding simply isn’t going to work in this market. But, learning to capture short-term moves will.

My Jeff Clark Trader subscribers enjoy a thorough education on options trading, and a monthly trade recommendation, for just $19 per year. That’s less than some folks spend on dinner each night.

If you want to learn how to capture gains from these short-term moves, in what might soon be the most turbulent market in history, click here.

I love the way you’re laying out things such as buy/sell instructions. They’re not only clearly written, but informative enough for someone green at options to have an easy time learning. Placing options orders is only a matter of filling in a form just the way it’s written out. Great job Jeff Clark!

Great call on GDX. I didn’t play this one, but the market continues its rampage higher. It looks like tech is not coming down, but financials are moving up, which is extremely bullish price action.

I was looking to add gold since Bill Bonner said to buy now, but I will follow your advice to hold off.

From this Monday’s Market Minute, a few subscribers share their opinion about Memorial Day…

Jeff, just a note to say thank you.

You wrote: “We can argue about the justifications for war. We can argue about whether or not our sons and daughters should be deployed to places like Iraq, Afghanistan, or anywhere else in the world. Both sides have valid reasons for their positions.”

You couldn’t be more wrong. There has never been a valid reason for U.S. soldiers to be deployed to Kuwait, Iraq, or Afghanistan, nor was there one for them to be deployed to Vietnam. And there never will be one.

Jeff, you’re an emotional, blind idiot like the vast majority of Americans. Yes, “freedom is not free” and “war is expensive.” And yes, they “paid the ultimate price.” That price was their lives but it didn’t buy, or preserve, our freedom. Can you not look up, remove your blinders, and look around? Do you think you’re really free?

Tell me how you think every two-bit, tyrannical government employee can issue both immoral and illegal dictates that nullify the sovereignty over our lives, which is given to us by our Creator as a birthright, if we’re truly free. As you sit in lockdown, tell me how you’re free. Freedom is a zero-sum game. We’re endowed by our Creator with 100% freedom at birth.

If there were no soldiers, there could be no wars and the resultant transfer of more and more of our Creator-endowed sovereignty to the government. I’m sure you’ve heard of the phrase “War is the health of the State.” That is an absolute truth. That’s the primary means the government uses to enslave us (usurp more of our Creator-endowed sovereignty).

Therefore, soldiers don’t die for our freedom, they die for the preservation, and increase of government freedom, meaning that we become further enslaved by the government. Our freedom has been monotonically decreasing daily ever since that black day in 1789 when America was created. Can you not see that?

I’ll debate you, or anyone else, regarding the proposition that soldiers defend our freedom. Because our freedom monotonically declines daily with every new government dictate. I will win the debate. Neither you nor anyone else can dig up any data showing that the death of any soldier defended the freedom of citizens.

That’s why when I look over Arlington National Cemetery, I weep knowing that every soldier there died for a lie. Their deaths were needless. They left widows, orphans, and deprived us of the potential contributions they could’ve made to society. And, their deaths never preserved or restored our Creator-endowed birthright of sovereignty.

Wake up, Jeff Clark. We’ll never be free if people like you continue to worship the State via this emotional display and utter disregard of reality known as Memorial Day. The reality is that no soldier ever died for our freedom, they all died for a lie. Their deaths only preserved and increased the freedom of the government thereby resulting in further and further enslavement by the government.

The truth is that Memorial Day should be a remembrance of the futility of their deaths which has further enslaved us under the heavy hand, or boot, of the government.