Thank you to everyone who wrote in with questions this week. Here are a couple of the most intriguing concerns…

Hi Jeff, I believe Trump’s Fair And Reciprocal Trade Act (FARTA) will trigger a recession. For that reason, I’ve moved money into gold and marijuana stocks. Don’t you think that the FARTA policy will overpower the technical indicators you usually follow?

Technical analysis is more about the psychology of investors. A chart is merely a picture of investors’ emotions towards a stock or the market at that specific moment in time. Since emotions are fairly consistent – for example, we tend to have a consistent response to things like fear and greed – we can look at how the market behaved in past technical setups and use that to project what it may do in the future under similar conditions.

Whenever a fundamental policy change has the potential to affect investors’ emotions – and a recession would certainly do that – then it almost always shows up first in the technical conditions.

For example, you’ve responded to the threat of FARTA by moving money into gold stocks already, even though there is no sign of a recession yet. If the majority of investors do the same thing as you, then gold stocks will rally well ahead of any recession. Then, once the recession occurs, folks will say, “Aha! That’s why the gold stocks were rallying.”

But the technical analysts likely would have seen the pattern develop ahead of time.

So… I guess the short answer to your question is no. I do not think any sort of government policy will overpower the technical indicators we follow.

The S&P seems to be showing a pattern of lower highs and lower lows since June 15. Is this a longer-lasting phenomenon? I know we have been in a 30-year bull market, but can we keep our antennae up for a longer correction phase? I know Jeff to be a bear by nature… what does his bear nature say?

Hi Margaret. I do tend to lean bearish for the longer term. That’s not because I’m pessimistic or negative. I’m quite an optimist, really. I like to be happy, and I love it when everyone else is happy too.

But I know enough about math, accounting, and the dangers of ever-increasing debt loads to know that the piper must eventually be paid. There’s simply too much individual, corporate, and government debt – and much of it can’t ever possibly be repaid. And that keeps me skeptical and cautious on the current bull market.

The bull market will end eventually. It will end badly. And it will end at the hands of this monstrous debt load.

But “eventually” can take a very long time to get to. Stock prices can go up a whole lot more before we finally get there.

You are correct. The S&P 500 does show a pattern of lower highs and lower lows over the past three weeks. But three weeks of downside action isn’t going to jeopardize a nine-year-long bull market. Not yet, anyway.

I prefer, when trying to decipher a long-term trend, to use a long-term chart. For example, look at this monthly chart of the S&P 500 plotted against its 20-month exponential moving average line… 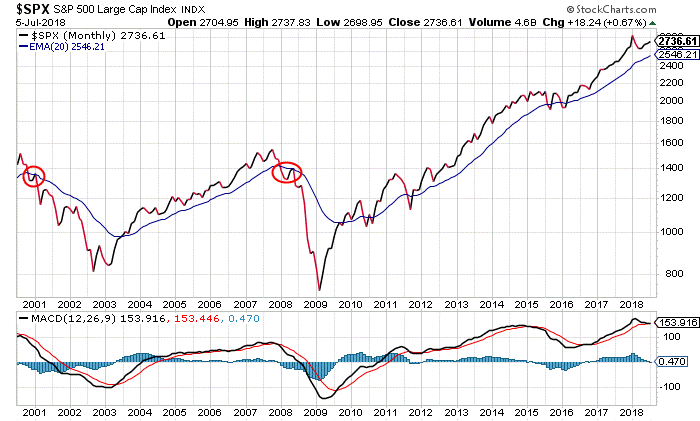 The index has had a few brief dips below the line since the bull market started in 2009. But the index recovered immediately each time and the bull market remained intact.

Right now, the S&P 500 is still almost 200 points above its 20-month EMA. The index would need to lose another 8% from here before we can start talking seriously about a new bear market.

Of course, we could see some strong short-term declines, and maybe even an intermediate-term correction. But as long as the S&P remains above its 20-month EMA, the bull gets the benefit of the doubt (despite my longer-term bearish leanings).

P.S. Do you have a question about option trading or the state of the market you’d like answered in the Friday Mailbag? Send in your questions, as well as any other suggestions or comments, right here.