Even bonds – traditionally considered a safe haven – have been falling right along with other risk assets like stocks and cryptocurrencies.

It’s mostly due to the bond market’s fears regarding inflation.

With the Fed in the early stages of a rate-hike cycle, investors have been forced to reckon with a new reality where low interest rates are a thing of the past…

First, it’s important to note that the higher the yield, the lower the price of a bond and vice versa.

So, with the Fed set to raise rates over the next several committee meetings, bonds have been selling off quickly.

But based on my analysis, I believe Treasury bond traders may have gotten ahead of themselves and that the bond market may be due for a relief rally.

TLT is an exchange-traded fund (ETF) that tracks the investment results of a basket of U.S. Treasury bonds with remaining maturities greater than twenty years.

Now, let’s look at a price chart of TLT… 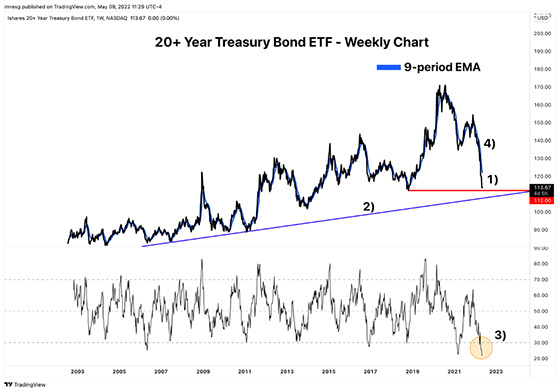 There are four key elements to this chart:

If we do get a bounce in TLT, this EMA can serve as a potential target. Right now, the 9-period EMA is around 122.

To clarify, TLT isn’t out of the woods just yet.

If we do get a bounce, it’s more likely to be a bear market rally. Meaning that after the bounce is finished, we’ll eventually get fresh new lows.

But even in a trending market, prices can only run so far before temporarily running out of steam. And this current sell-off in TLT looks like it’ll need to take a breather before trending again.

Targeting the 9-period weekly EMA would give us a potential move of about 7% from current levels… not bad for a short-term trade.

P.S. With the recent market volatility, being a buy-and-hold investor is a thing of the past. Now, it’s crucial to quickly get in and out of a trade to secure your gains.

That’s why tonight at 8 p.m. ET, Jeff Clark will reveal his most reliable trading strategy that could double your money dozens of times in a matter of days or even hours. Jeff doubled his money in just 45 minutes.

It’s all due to a market phenomenon that’s guaranteed to happen starting today. This opportunity to secure your retirement (or make some extra cash) won’t last long. So, click right here to reserve your spot.

Will you focus more on the bond market now that interest rates are set to rise? Or do you usually avoid bonds?