Emerging markets have been on fire this year. The MSCI Emerging Markets Fund (EEM) is up more than 20% so far in 2017. And short sellers have been crushed.

The technical indicators for EEM have reached overbought levels three previous times this year. But those conditions never produced more than just a small pullback, followed by another rally to new all-time highs.

So, emerging market bears have to be asking themselves… Is the fourth time the charm? 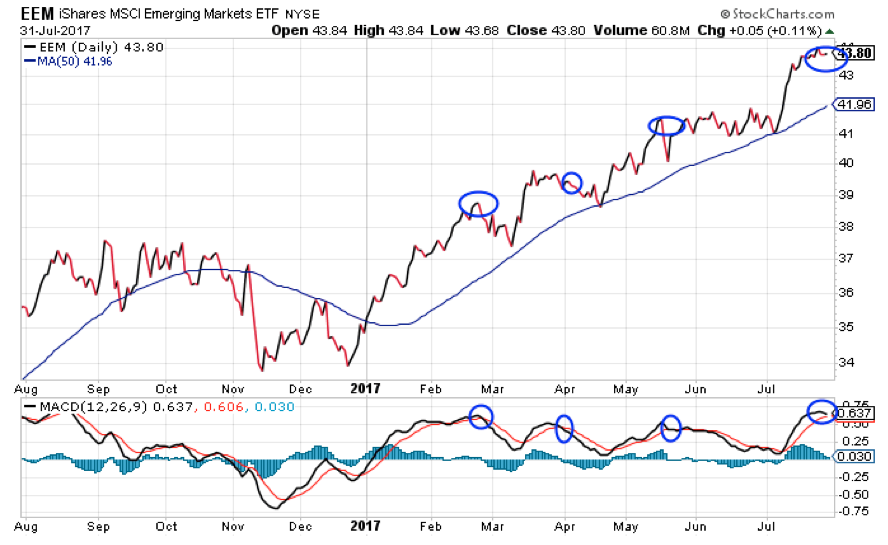 The blue circles on the chart indicate each time this year the MACD momentum indicator rolled over from an overbought condition. This action coincided with a short-term peak in the price of EEM. The stock then dipped down and tested the 50-day moving average (MA) line as support.

Support held each time. The MACD indicator dipped back to neutral… and a new rally got started.

Currently, the MACD indicator is more overbought than it’s been at any time this year, and it’s starting to roll over.

At the very minimum, EEM should decline back towards its 50-day MA at about $42. That’s a decline of about 4% from yesterday’s closing price.

But it has been quite some time since EEM has traded below its 50-day MA. It’s been a long time since we’ve seen oversold conditions on this chart. So there’s the potential for a larger move lower.

Whatever the case, though—if you’re thinking about buying into emerging markets right now, this chart setup suggests you’ll be able to get in at a lower price in the next few weeks.

P.S. What do you think the future holds for emerging market stocks? Send me your thoughts, along with any other questions or concerns, right here.

Jeff, I have been on board here now for a few months and thought I would share my thoughts about you and your service. My first trade and profit was on HYG July put. I'm also in on the HYG Aug. put which is in the red but that's O. K. I may still break even on it. I can tell you really hate that this trade has been going in the wrong direction.

That's the thing that I'm most impressed about. You seem to take a genuine interest in my money and thus won't recommend a trade just to be recommending a trade. The odds for you have to be such that it provides a very good chance for me to be successful. That attitude right there is far more valuable to me than any possible losses. I suspect that any loss will just be a blip compared to the winners. I'm in the GDX trade and just took a position in AG. I expect these to be winners. I also like how you provide charts to go along with your analysis on what you expect a stock to do, you are very thorough and clear on all of your analysis. Very happy at what's been presented to me.