In a wild week for the broad stock market, with the S&P 500, Nasdaq, and Dow all hitting new milestones… I just couldn’t peel my eyes away from gold.

There’s been a lot of mixed sentiment about gold this year. Some see this year’s rise in the yellow metal (about 18%) as the first innings of a grand new bull market. Others – including Jeff – believe we’re due for a major correction before things really get going.

Personally, I find it odd that gold has held onto its impressive gains even as the rest of the market is piling into risk. Normally, gold and stocks move opposite each other.

Top that with word that the world’s central banks are loading up on gold, and you wonder…

If the equities story is so strong, why the consistent interest in gold?

I have to break with Jeff a bit on this one… I think gold is more likely to run higher for the next few weeks, rather than lower. Today I’ll show you why.

Take a look at this daily chart of gold… 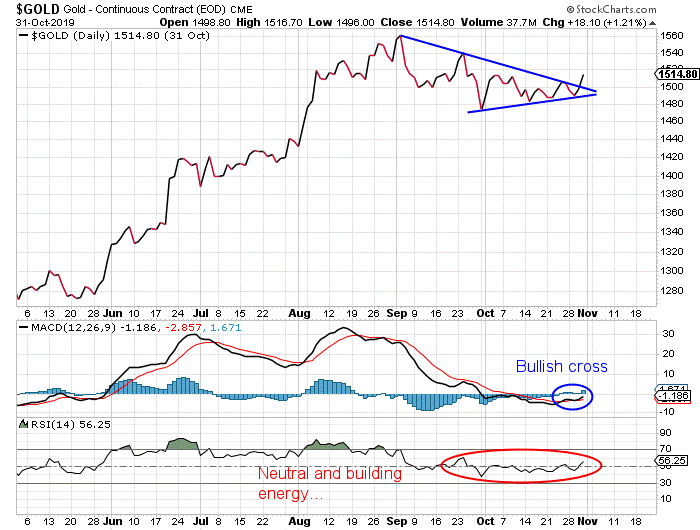 From the start of September, gold has been trading in an increasingly narrow range… between the high of $1,560 per ounce and a low of about $1,470.

When this sort of action occurs, it forms a falling resistance line and a rising support line. That results in a symmetrical triangle pattern – as you can see above. And with this week’s action, it appears that gold has broken out of that pattern to the upside.

The catalyst for this, of course, is the Fed’s decision on Wednesday to cut interest rates further by 25 basis points. Gold bugs rightly see more easy money and central bank intervention as bullish for precious metals.

Now, the big question is whether that breakout will hold. Sometimes a breakout is more like a “fake out” as the price retreats back below its new support line.

To figure that out, it’s best to look to the momentum indicators. And there’s evidence that the latest bullish move in gold is just getting started.

We can also see that the Relative Strength Index (RSI) is trading in a neutral position. Gold is neither overbought nor oversold, and thus has plenty of room to run higher.

All this leads me to believe the gold breakout is for real… and that we should see it run higher through the end of the year.

And if you’re not, consider adding some exposure to the metal before the year is out.

As you saw today, gold provides profitable trading opportunities all the time. And with Jeff’s guidance, you can profit from specific, conservative option plays – all while learning to spot these plays yourself.

Click here to learn more – and lock in our special offer of $19 for the first year.

Thanks for all your great services you offer. I have followed you for years, but now I have a lot of free time after ending my 20-year modeling career. I have been trading for 16 years on my own and have done very well. Now I am going to follow you 100% of the time, not many people have the discipline to do that.

My first option trade was 2 weeks ago on your recent recommendation. I noticed you updated it and you still liked the setup even though it was down a bit from where you recommended it. I bought some contracts anyway and made 110% in 2 trading days and sold all my contracts for a nice chunk of change! (I should have only sold half, as they are trading for even more now) Now I know why you got hooked on options!

On your new Breakout Alert, I think we will do even better.

This company is very small…

Yet it’s the world leader of a key 5G technology… And it already counts many of the biggest network operators in the world as clients – AT&T, Vodafone, SoftBank, and many more.

It’s a perfect play for the 5G trend…

Get its name here.