The gold sector has had a miserable month. The VanEck Vectors Gold Miners ETF (GDX) has fallen 11% from its March high – with much of that decline happening in just the past week.

When we last looked at the gold sector, we noted that GDX had reversed a potentially bullish move and looked poised for a fall. And we set a downside target of somewhere between $21.50 and $20.50 for GDX.

As you can tell from the following chart, GDX is now approaching the lower end of that target zone… 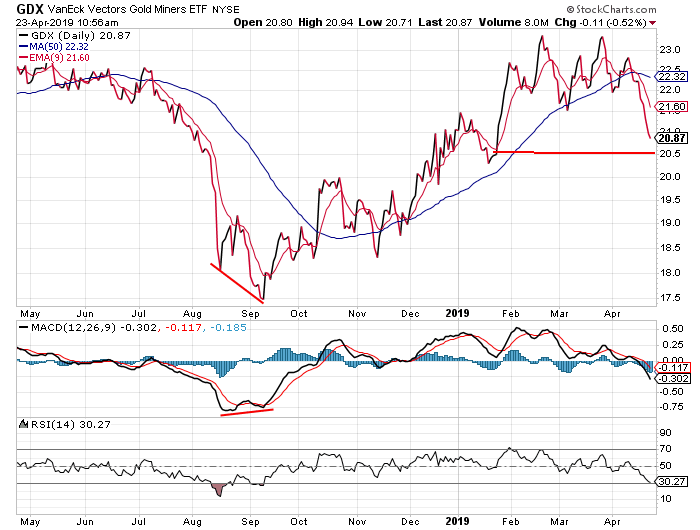 The January low near $20.50 is an obvious support level, and it’s where traders can start looking for a bounce in GDX. Notice, though, that there isn’t any positive divergence on the MACD or RSI momentum indicators. In other words, the indicators have been falling right along with GDX.

This indicates that the existing downtrend is strong. And while GDX might get a short-term bounce off of its support level, the sector probably still has lower to go.

Take a look at the action in GDX last August and September. As GDX fell to a lower low, you can see that the MACD and RSI indicators made higher lows. This is the sort of positive divergence that indicates the potential for a trend change. And that’s the sort of action I’m hoping to see develop in the GDX chart over the next few weeks.

Aggressive traders might consider buying GDX as it approaches support, and then trading it for a short-term bounce. But, don’t stick around too long in the trade. Any bounce is likely to be short-lived and lead to lower lows.

We’ll get a much better, intermediate-term buying opportunity in the gold sector if we can get positive divergence on the technical indicators. That’s going to take at least a couple of weeks to develop. But, that’s where I’ll be looking to buy the gold stocks.

We are following the strategy of holding long and resisting the itch to take profits, for better or worse. The itch was strong in 2017. I have always been attracted to short trades, so it’s been a bit tough…

It’s your name I look for in my email every day. Thank you so much for sharing your analysis!

And another reader responds to last Friday’s Market Minute…

Ordinarily, I would agree with you about illiquid options. However, I currently hold option positions on Booking Holdings (BKNG) which trades more than 500,000 shares daily and the option positions I traded had a volume in excess 1,000. Even with this volume, the greedy market makers were still suggesting a bid/ask spread of $6!

This is forcing me to wait until expiration day to harvest most of my profits on this trade.

Are you bullish or bearish on gold? How have you been trading the sector?