The price of oil is breaking down.

Yes, that’s a different tune than I was singing two weeks ago. But, back then oil was oversold. The price was approaching an important support level. And, in the world of commodity trading, the general rule is to “buy at support and sell at resistance.”

Sometimes though, support breaks down and the price heads lower. That’s what looks to be happening in the oil market right now. Here’s an updated look at the oil chart I showed you two weeks ago…

Oil spent eight months in a wide trading range between $51 and $63 per barrel. Traders could have profited quite well by simply buying oil every time it approached support and selling it as it approached resistance. Now though, it looks like that pattern is changing.

Oil is breaking down. The price broke below $51 per barrel early last week. It recovered, and it bounced back up to finish the week at $50.32 – arguably within the range of its support line. So, there’s a chance that last week’s breakdown was more of a “fake-down,” and oil will snap back into its trading range.

But, I’m not taking that chance.

The whole idea of buying oil at its support line is to set up a low-risk/high-reward trade. If the price bounces, traders have lots of room to profit on the upside move. And, if the price falls, traders can exit the position for a small loss.

If you bought oil based on my comments two weeks ago, then you have a small loss and it’s time to exit the trade.
Yes… there’s a chance oil can recover… and by selling now, you’ll get “bluffed” out of the move.

But, if the breakdown is real, then oil could be headed quite a bit lower. The next support line on the chart is down at $42.50. That’s a 15% drop from where oil closed on Friday.

In other words, with the price of oil now trading below the support line of its eight month long trading range,
there’s a lot more risk to this trade than there was two weeks ago.

Oil traders should move to the sidelines.

If you bought oil, will you be holding on or selling for a small loss? Why?

Send us your answers, or any other comments you may have, at [email protected]. We look forward to reading them everyday.

This is a type of security most Americans have never seen before.

E.B. Tucker Just revealed the secret to investing in “Omega shares.” A rare type of investment only 1 in 10,000 Americans has been fortunate enough to access. But after personally using them for the chance to see gains as high as 6,200%… E.B. knew he had to share these with his readers. And now, E.B. has three of these “Omega shares” you can buy RIGHT NOW for the chance to turn every $3k into an extraordinary $41,000 or more. It’s not too late to profit! There are only a few slots available! 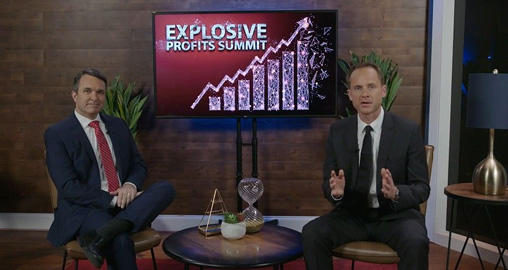