The first trading week of a new year usually gives traders little information about the market’s concerns, dreams, or aspirations.

But not this year…

This time, the market dreamt and aspired for a continuation of the Santa Claus rally.

But then the reality of fundamentals kicked in and within minutes it grew very concerned about Fed policy… again.

An Uncharacteristic Reaction to Stale Information

That’s why you may have noticed that on Wednesday, Fed minutes were released, and the market started to sell off – falling 1.5% in just 90 minutes.

But this move was actually uncharacteristic.

If you take every Fed minute report that ever came out, you’ll find that price reactions tend to be muted, and in the cases where they aren’t, prices quickly revert.

Meaning, it basically reiterated what Jay Powell told us two weeks ago when he said that there’ll be three rate hikes on the table in 2022, the Fed would taper bond purchases, and these two policy changes may come sooner rather than later.

In addition, some Fed members already publicly stated that the Fed rate meeting in March will be a “live one.” So, we may actually see them raise rates in March… earlier than anticipated.

Overall, it may seem difficult to understand what new information was presented here…

That’s because there wasn’t any.

Most People Simply Look at Prices, and Nothing Else

The market collectively knew all this was happening on December 15.

Markets subsequently sold off for three straight days, and things made sense.

And on December 15, the Fed’s decision to taper early and put three rate hikes on the table is extremely tight and extremely bearish.

Especially given that a big part of the meteoric rise in asset prices over the last 18 months had everything to do with loose Fed policy.

But between now and then came a seasonal phenomenon known as the Santa Claus rally.

That rally led to the S&P 500 closing out the year at its all-time high, and when people see prices rising, often they assume it’ll continue.

Santa Claus rallies happen because of institutional reshuffling of portfolios, window dressing, back and forth tax selling and buying, and other financial factors.

None of this is the result of anticipation of things like rising earnings or a better macroeconomic environment.

But underneath the hood of this seasonal phenomenon, something else was happening.

A Mathematical Fact in Action

One of the big trades both Jeff Clark and I called for 2022 is the resurgence of value versus the over-priced pockets of the tech sector.

A tighter Fed – with rising interest rates – puts pressure on companies that are solely about growth… with no current earnings. It’s the result of a fundamental rule taught in every Finance 101 course – the time value of money. 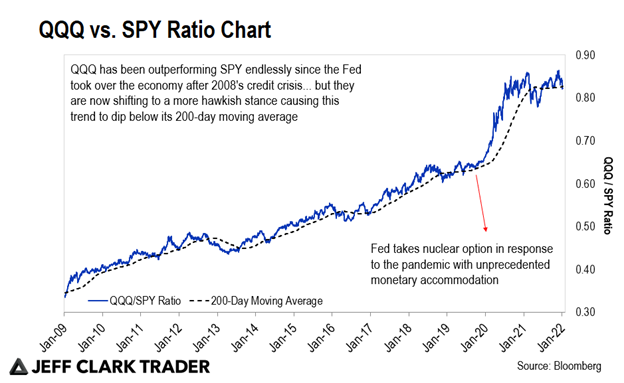 The chart shows the ratio of the Invesco QQQ Trust (QQQ) over the SPDR S&P 500 ETF Trust (SPY).

QQQ is tech-heavy, while SPY is diversified across sectors.

This ratio has been rising for years now. Most blips in the trend have been related to a potential Fed policy shift.

It moved below its 200-day moving average (MA – dashed line) again this week… And this blip we’re seeing now is no different.

But unlike before where there was no inflation forcing the Fed’s hand to tighten, they would simply make a dovish shift every time the market would sell off. The last example of this was in 2018.

However, 2022 is likely to be different. The whole reason the Fed is tightening is because they fear inflation is becoming too big for them to handle.

They were too loose after the pandemic and even looser when the economy didn’t need it anymore.

Whether this move will be successful in reigning in inflation remains to be seen.

Either way, investors need to get out of their myopic approach towards buying stocks, and diversify their money across boring, dirty value stocks.

Thank you for your well wishes. I read with interest what, in your expertise, you have to say. I’m slow to take action (not one trade yet), but I will.

I don’t feel I know enough about options to delve in there, perhaps in this New Year. Thanks again for your advice and warm wishes.