You remember January, don’t you? That was when the stock market spent the first half of the month pressing higher every day. Investors chased stocks higher into overbought conditions. Financial television talking heads warned, “You better get on board now or else risk missing out.”

And, they openly ridiculed anyone who dared to preach caution.

Of course, those conditions set the stage for the decline in January’s second half. The S&P 500 fell hard, giving back all of the gains earned in 2021, and tested its 50-day moving average (MA) line for the first time since October.

That decline in late January was enough to shift investor sentiment from bullish to bearish. It corrected the overbought conditions. And, it gave patient investors a lower-risk chance to put their money to work.

February has been a remarkable month, so far. As of Friday’s close (3907), the S&P is up over 5% in less than three weeks. That’s a stronger rally than what we saw in early January.

Stocks seem to be moving higher almost every day. Investors, ignoring overbought conditions and multiple warning signs, are chasing stocks higher. They’re more afraid of missing out on gains than of suffering through a decline. And, the financial television talking heads are bathing in smugness once again.

The stock market doesn’t usually play out the exact same script two months in a row. But, the stock market has done a lot of unusual things lately. So, we should be ready for anything. And, if we’re going to replay January, then we’re setting up for a rough move next week. 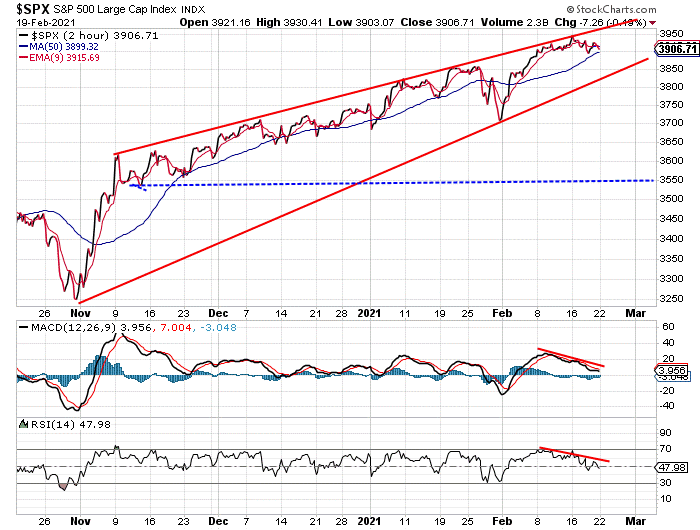 The index itself is showing a “bearish rising wedge” formation on the chart. A breakdown from this wedge could lead to a test of the 3550 area as support. That’s a drop of nearly 10% from Friday’s high. Most investors likely aren’t prepared for that sort of decline.

The selloff in January kicked into gear after the S&P 500 dropped below its 9-day exponential moving average (EMA – red line). The index then dropped and tested the 50-day MA (blue line) as support.

The S&P 500 closed Friday just above its 9-day EMA. A close below that level will signal the end of the recent rally. We could then be in for a pretty good selloff over the next several sessions.

If this essay reads familiar, that’s because it’s nearly identical to an essay we published at this time last year. That was right at the start of a nasty 30% decline in the stock market.

So, maybe, rather than asking, “Do you remember January?” we should try to remember last year instead.

Dear Mr. Clark, I absolutely loved your “letter” to America from the 1%. I cannot wait to share it with my friends on Facebook. I have many very liberal friends who’ll take this wrong way. I have tried, in vain, many times to educate my friends. To warn them of dangerous government policies, and the politicians who promote them… To protect their sovereignty by obtaining dual citizenship… To protect their wealth through physical gold and silver… And many more ways.

Unfortunately, the government propaganda machine known as the mainstream media is too powerful. My fellow citizens are completely under its spell. At least 95% of them lack the capacity to break free. And many of them who claim to be “woke,” are the very ones decrying that the 1% need to “pay their fair share.” As for myself, I’ve awakened very late in life. It began about 10 years ago. However, it hasn’t been until last year that I truly began to work towards freeing myself from the shackles the American government has placed upon my shoulders.

And thanks to the knowledge I’ve gained from you, and others like you, I feel I’ve begun my journey to financial independence. While I know it’s impossible to avoid all-powerful institutions like the IRS, I’m no longer afraid of them. They’ll always take their fair share (that’s a joke).

As I said, many will take this letter the wrong way. They’re too far gone to know which direction is up anymore. All I can do now is hope at least one more person wakes up. In the meantime, I have to keep moving forward with my own plans. Thank you for this letter. I really look forward to your essays. They’re gems. Happy trading.