But every so often, those two investing approaches can line up… creating a massive opportunity. And our colleague Jeff Brown, chief technology analyst at Bonner & Partners, recently dug up a story that does just that.

In short, an incredible innovation in the biotech space is just about to clear approval from the FDA – possibly within days. When it does, Jeff Brown believes investors in one particular stock could 10x their money essentially overnight.

He’s revealing all the details in a limited-time, free presentation tomorrow – which you can sign up for with one click right here. But until then, I’ll let him fill you in on what’s going on…

As a baby, she would lie limp in her parents’ arms, staring blankly into the distance. Her seizures wouldn’t stop. Medical tests showed signs of liver damage. This was all before her second birthday.

Grace’s parents were beside themselves, as any parent would be. They traveled the country visiting specialists. They ran numerous tests, but no one could diagnose Grace’s condition.

None of them could provide an explanation.

Then, when their daughter turned two years old, the Wilseys tried something else. They had Grace’s entire genome sequenced.

A genome is an organism’s complete set of DNA, including all its genes. Genome sequencing is the process of determining the complete DNA sequence. Think of it like creating a “genetic roadmap”, a complete blueprint of an organism’s genetic material.

What the test showed was astounding…

Grace Wilsey had a condition known as NGLY1 Deficiency. In short, the little girl’s NGLY1 genes were mutated. They were like typos in her genetic makeup.

One of the gene mutations prevented the little girl from producing tears. At the time, the disorder was so rare that only six people in the entire world had been diagnosed with it.

This story is just one of millions. It is estimated that some 280 million people suffer from a rare genetic disease. Many of them often live their lives undiagnosed.

But there is hope on the horizon.

The cost of sequencing a human genome has plummeted. The speed of the sequencing technology has grown exponentially. And thanks to breakthroughs in genetic editing technology, we are on the verge of a complete transformation in medical care.

Soon, we’ll be able to identify genetic diseases like cystic fibrosis or sickle cell anemia years before symptoms present themselves. Then, we will be able to fix the genetic mutation that caused the underlying condition.

Millions of lives will be saved. Hundreds of billions of dollars typically spent on chronic medical care will be eliminated. It will be the biggest revolution in health care since the invention of antibiotics.

These days, we typically wait until we feel sick before we seek medical treatment. Then, we visit a hospital where our symptoms are treated.

Very often, each patient is treated with a “one size fits all” therapy. This approach to medicine is reactionary. In the very near future, medicine will be proactive and personalized.

The technique that the Wilseys used to diagnose their daughter – genetic sequencing – will be common practice. We will be able to “blueprint” our DNA and identify early indicators of disease.

And the cost of genetic sequencing is plummeting in price. Take a look at the below chart. It maps the average cost to sequence – or blueprint – a human genome. 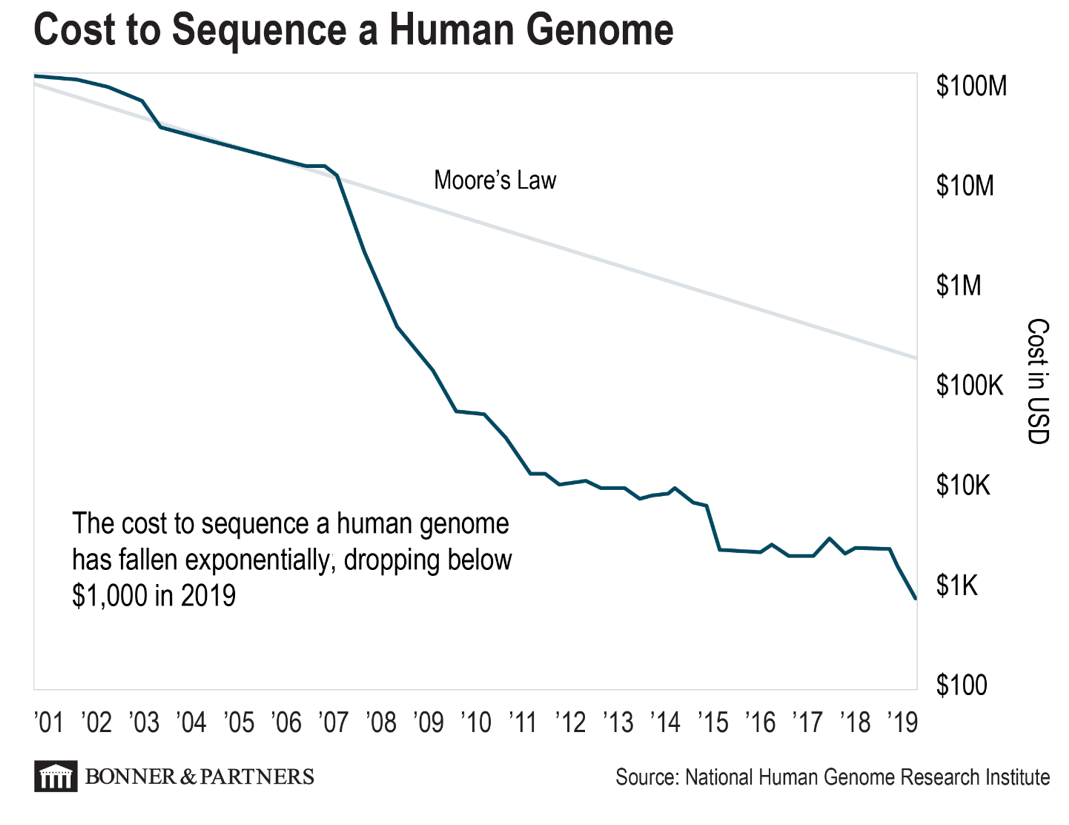 As you can see, in 2001, it cost a staggering $100 million to sequence all of a human’s genetic material.

But look at where the cost is today. According to data published by the National Human Genome Research Institute, a division of the National Institutes of Health, the cost dropped to $606 as of May this year. No kidding.

And that changes everything.

When costs decline, insurers get onboard with genetic sequencing…

As of November 1, 2017, UnitedHealthcare began covering “whole exome sequencing for patients where clinical presentation is non-specific and does not fit a well-defined syndrome.”

In other words, if a physician knows something is wrong, but can’t figure out what it is, UnitedHealthcare will pay to have the patient’s whole exome sequenced.

And on December 1, Cigna will be in-network with direct-to-customer genetic testing screenings. This will give 16 million lives easy access to genetic sequencing.

Think of how much time and pain can be saved when a genetic sequence can tell us almost immediately what is wrong… rather than spending years and potentially millions of dollars pursuing ineffective or sometimes lethal therapies.

But identifying a genetically caused condition is only the first step. Once we identify a mutated gene, a therapy must be administered to “fix” the mutation.

That’s where things get very interesting.

The technology that will fix the “typos” in our genetic material is called CRISPR-Cas9. It stands for Clustered Regularly Interspaced Short Palindromic Repeats/CRISPR Associated Protein 9. I know. It’s a mouthful. I typically refer to this technology as just “CRISPR.”

CRISPR technology can “edit” our DNA as if it were software code. It is a way to “program” the genome and remove the “typos” – or, in genetic terms, the “mutations” – from DNA.

I’ve referred to CRISPR technology as “The God Key” because of the powerful potential to improve the human condition.

And we’re getting early indications that CRISPR technology works.

In February, one of the leading CRISPR companies dosed the first patient for a therapy to treat a genetic blood disorder – beta thalassemia.

As of November, we heard that the patient has not required a blood transfusion for more than nine months. Patients who have beta thalassemia usually require blood transfusions as often as every two to four weeks.

Victoria Gray is the first person in the United States to be treated with CRISPR for sickle cell disease. Gray was treated weeks ago, in a clinical trial administered by Vertex Pharmaceuticals.

It’s still early days, but it looks like the CRISPR treatment is working for Victoria Gray. Early results are positive. In fact, she called her edited bone marrow cells “supercells.”

There are an estimated 6,000 known genetic diseases. CRISPR genetic editing has the potential to cure every one of them permanently.

With genetic sequencing and CRISPR genetic editing, we will live well into our hundreds. And we’ll enjoy a great quality of life along the way.

This is the future of medicine.

And it’s approaching faster than most realize.

P.S. Investing in the companies behind this technology is a once-in-a-generation opportunity. I estimate the total market opportunity for therapies derived from CRISPR/Cas9 genetic editing to exceed $1 trillion. Essentially, the sky is the limit.

And there is one small-cap CRISPR company that investors need to own today. In the coming days, this company will release the results of its latest trial. I have good reason to believe that trial will be a success. And after the announcement, I predict shares in this small-cap stock will soar as high as 1,000%.

But time is running out. The trial results are fast approaching. If you’d like to get the details before it’s too late, click right here to be automatically included on a list for interested investors. I’ll email you a private recording with all the details on Monday. Click here.