The last time the stock market was set up this way, the S&P 500 fell 73 points in three days.

It was in late November. The stock market did what it always seemed to do right before Thanksgiving… It rallied. The S&P 500 hit a new all-time high by closing at 3,153.

But, the technical conditions were overbought. The Volatility Index (VIX) was trading near its low for the year. And investor sentiment – a contrary indicator – was quite bullish.

I warned at the time the market was vulnerable for a quick, sharp pullback that would eventually set the stage for a year-end rally.

Of course, that’s only a loss of 2.3%, which is really quite small. But, if you were looking to buy stocks in anticipation of a year-end rally, then buying them on December 3 was vastly superior to buying stocks on November 27.

Granted… this is a seasonally bullish time of year for the stock market. Stocks almost always rally during option expiration week in December and during the week of Christmas. Last year was a notable exception. This year, so far, is keeping with the bullish theme. The S&P closed yesterday at another new all-time high.

But, just as it was right before Thanksgiving, technical conditions are overbought. The VIX is trading near its low of the year. And, investor sentiment has become quite bullish.

I’m not bearish here… not yet, anyway. I haven’t encouraged folks to take short positions on the market. But, it looks like we’re due for another one of those sudden and swift pullbacks that knocks the smug grins off the faces of the universally bullish financial television talking heads. 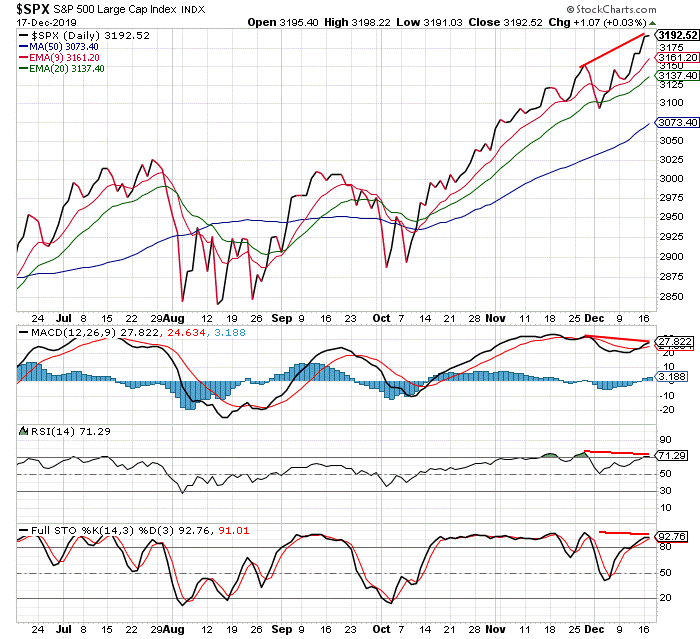 While the S&P 500 has rallied to a new all-time high, the various technical indicators at the bottom of the chart are making lower highs. This sort of “negative divergence” is often a warning sign of at least a short-term reversal in trend.

Also… notice how far apart all of the various moving averages are. At the very least, the market needs a few days to consolidate the recent gains and allow the moving averages to come closer together and build energy for a continued move higher. In the current extended condition, there’s not much energy available to fuel a sustainable rally.

Yes, this is a bullish time of the year for the stock market. And I don’t suggest fighting that trend. But, I will suggest it probably makes more sense to wait a few days before putting more money to work. The market looks set up for a sudden and swift decline right now.

Do you think the market’s headed for a swift correction to end the year? Or is this the start of a continued run higher all the way to 2020?

And in either case… how do you plan to trade it?

Send in your responses… along with any other questions or comments… to [email protected].

"They Laughed When I Quit Stocks — But Look at Me Now"

For the first time, California millionaire Jeff Clark is revealing how he makes all the money he needs to fund a comfortable retirement — without touching stocks.