Jeff’s note: As we wrap up this strange summer and celebrate Labor Day, I wanted to share a story I often think about during uncertain times.

About 20 years ago, in a moment of panic, I almost blew up not just my own trading account, but my client’s as well. Then, I quickly remembered this one simple thing… and ended up making the biggest profit of my career.

Read on below to see how I learned (and still follow) one of my most valuable lessons.

We’ll be back on Wednesday with fresh market insights.

The Most Profitable Trade of My Career Almost Bankrupted Me

In February 2000, I spotted an irresistible option trade. It was a no-brainer – almost as if the guys on the option trading floors were holding up signs announcing “FREE MONEY.”

So, I backed up my wheelbarrow and loaded up.

It was the most profitable trade of my career. But it almost bankrupted me first.

The story is 17 years old, and my memory isn’t what it once was, so the finer details may not be exact. But here’s basically what happened…

PALM, the maker of smartphones and other handheld technology products, was scheduled to go public on March 2, 2000. The company was a wholly-owned subsidiary of 3Com – which was issuing about 20% of the company to the public and taking advantage of the insane valuations of the internet mania.

The IPO price was set at $38. Of course, we all knew the stock would open for trading way above that level because, well… that’s just what stocks did back then.

In January 2000, shares of 3Com were trading at about $50. By the last week of February, they were crossing the tape at more than $90.

The market was already pricing in the increased valuation of 3Com shares as a result of the PALM IPO. In the option markets, the expectations had risen to purely foolish levels.

3Com was trading at $90 – already up 80% in the past month! It would have to go up another 33% in the next four weeks for these calls to be worth anything at all by the time they expired.

Sellers of the call options would receive $600 for each contract and would be obligated to sell shares of 3Com at $120 if the stock was above that level on option expiration day.

The pricing of these options was just nuts, and it was the result of tremendous hype surrounding the PALM IPO – hype that would disappear as soon as the stock went public. I did the only thing I could do… I sold the call options and collected $600 on each contract. In fact, since the premium was so large and the potential for profit was so high, I took a position that was about three times my normal size.

And the hype continued…

The next day, just three trading days before the PALM IPO, shares of 3Com rallied to $95, and the option premiums inflated further. The March $120 call options, which I had sold the day before for $6, were now trading at $10. I was down $400 per contract in just one day.

That’s right. I increased my position size even more. Not only that, I started telling my clients about this trade and encouraging them to take positions. I even put my own brokerage firm’s money into the trade. I was THAT certain it would be a winner.

Then came the morning of the PALM IPO. I hadn’t slept at all the night before. I was sitting at my desk and staring through an assortment of half-empty Pepto-Bismol bottles at the television screen on the other side of my office.

Maria Bartiromo and Bob Pisani were on CNBC. They were talking about the tremendous interest investors had in the PALM IPO. Early indications were that PALM – which was priced at $38 for the IPO – would open for trading somewhere north of $150 per share.

My stomach sank, and I slammed my forehead onto the top of my desk.

If PALM was worth $150 per share, then a quick “back of the napkin” calculation told me 3Com was worth more than $300 per share.

I had agreed to sell it for $120. My exposure was so large that anything above $180 would bankrupt me. It would wipe out my account, put my firm under the minimum net capital requirements, and create huge losses for my clients.

I started to panic. I started typing an order to cover the position and take the loss while there was still time. 3Com was trading at $105, and the March $120 call options were $18. It would be a tough loss to swallow, but I’d remain solvent, and I’d be around to trade the next day.

Just as I finished typing the order and was about to hit the “send” key, I stopped. A voice in the back of my head said, “It’s all hype. You’ve seen this before and you know how it’s going to end. You used logic and common sense when you got into the position. Now you’re about to panic to get out.”

I erased my order entry screen. Stood up from my desk and unplugged the television. I then left my office for two hours.

PALM started trading about one hour later. It opened at $140 per share, the high of the day, and then began drifting lower.

3Com never traded above $110. And as soon as PALM went public, 3Com started to sell off. It was a typical, and predictable, “sell on the news” situation.

The trade that had threatened to bankrupt me just a few hours earlier had now made a fortune. My clients were rich. My firm was rich. And my own net worth nearly doubled as a result.

I shut my office door, turned off the lights, sat down at my desk, and closed my eyes. And I swore I would never, ever do that again.

There’s no need to.

The option market provides any number of ways to take advantage of mispriced, overhyped situations without exposing yourself to tremendous risks.

And once you identify that fact, you’ll be able to make more money trading options in one week than some people make in an entire year.

In today’s mailbag, a Market Minute subscriber shares their experience with Jeff’s recent webinar, and thanks him for his guidance…

Sir, I honestly don’t know where to begin… I began to invest in the stock market for the very first time in April. I was so tired of struggling from paycheck to paycheck. I’ve experienced some gains as well as losses. But I must say that it beats the current interest rate by financial institutions.

Options seemed complicated from afar and I’m not much of a risk-taker, so I continued to play it safe by buying stocks here and there. When I received your email that you were going to show how easy options were by teaching your son Carson, who’s only 18, to double his money… I became excited, except I wasn’t able to make the 8/26 show. I felt like I was missing an opportunity of a lifetime.

I was so excited to learn the next day that I could review the taping. I listened intently and took notes. Then, I immediately tried to apply what I learned. Unfortunately, I had to obtain permission from my brokerage and wait 24 hours to input my trade.

The next 24 hours felt like an eternity, but I was able to input my call the next day. I sold stocks that I felt weren’t doing great… and then decided to take advantage of your free trade recommendation! By the close of the market on the same day, and for the first time dealing with the market, I experienced an $85.50 gain! To others, it’s not much, but to me it’s a new beginning to a world I thought was beyond my reach.

Please remember my name, because I am unable to afford your services now, but one day I will! Thank you so much for sharing this information for free! I’m forever grateful!

May God continue to bless you and your family.

“These methods are not approved by the FDA.”

All in order to access an advanced $563 million private research facility.

He wasn’t going to say no.

So, he stepped inside. And what he discovered next shocked him…

A special piece of equipment this research facility makes use of at the start of a massive, new 5,900% technological boom.

This has major repercussions if you have any money invested. And could be the closest thing to buying Amazon back when it was $50. 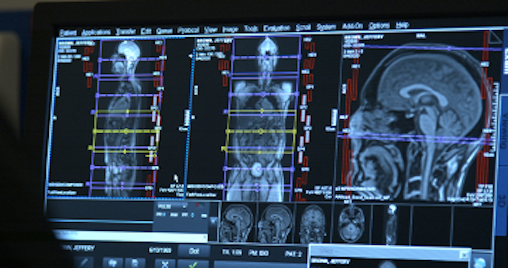