Buying into the gold sector right now is a mistake. You’ll have a better chance to do so in the weeks ahead.

Let’s be clear… Gold stocks are in a new, long-term bull market. They will be higher several months from now than where they are today. But, in the short term, they’re most likely headed lower. 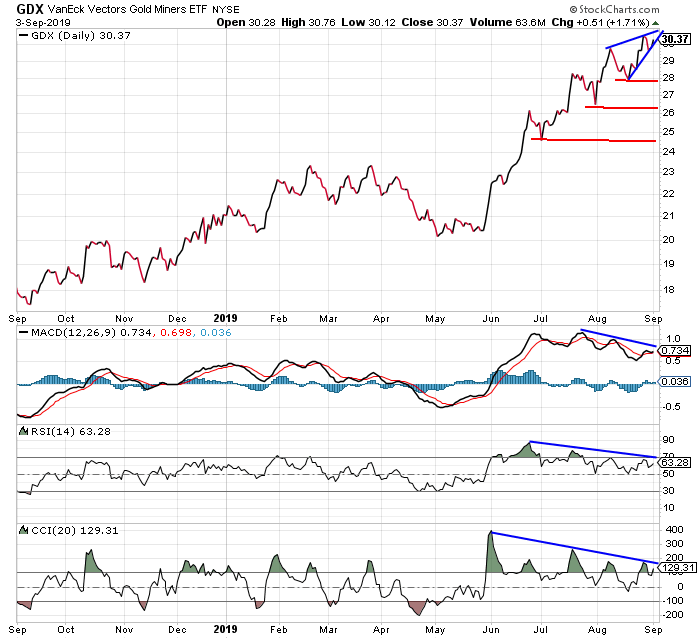 This is perhaps the most vulnerable looking chart in the stock market right now.

The action in GDX over the past few weeks has formed a “rising wedge” pattern on the chart, with negative divergence on the momentum indicators. In other words, as GDX has rallied to slightly higher highs, the various momentum indicators at the bottom of the chart have been making lower highs.

This indicates that the momentum behind the rally is fading. And, it’s often an early warning sign of an impending decline.

Admittedly, the chart of GDX also showed negative divergence back in mid-July. And the gold sector was able to rally higher despite that divergence. But the rally is now six weeks older. GDX is now about 10% higher. And, the negative divergence is even more pronounced.

Add to this the near-record short interest among the commercial traders (the so-called “smart money”), and the potential for a Gold Miners Bullish Percent Index ($BPGDM) sell signal, and you have the makings of a several week-long decline in the gold sector.

If GDX breaks the rising wedge pattern to the downside, then the minimum target would be a move down to the August low at about $28 per share. But I think it could go deeper than that.

The late-July low at about $26 looks like a more reasonable target. And, if the selling pressure really kicks into gear, then GDX could decline all the way back to where it was in early July and hit $25 per share.

For now, though, the gold sector looks vulnerable to a decline.

P.S. I hesitated to go public with this…

As some of you might know, I’m a private guy. I’m not interested in the spotlight. All I want is to help everyday folks make money in the stock market – no matter which way it turns.

But when I saw the action in the gold market recently, I knew I had to put this out there. Too many folks are simply “buying and holding” gold stocks, hoping they’ll keep running higher… When really, there’s a simple technique that could potentially earn you 10x more money in the gold market – without even touching gold stocks.

Get all the details right here.

Today, a couple of subscribers give their take on Jeff’s services…

Jeff, back in the day I was a crude oil trader for the premier commodities trading company in the world. If there’s one thing I’ve learned over the years, it’s not to force trades. Sometimes it’s best to just sit on the bank and watch the river roll by.

I’m a lifetime Legacy member and I enjoy your perspective and comments. I don’t normally make Delta Direct trades but do make Delta Report ones.

Thanks to Jeff for all the great tips and advice. I’ve been a member of a number of stock advice services and haven’t received such useful thought process. I especially appreciate the advice on how much to spend on options. That’s probably where I made my mistakes in the past, but I really like the greater income that they offer, so I want to use them.