Treasury bonds rallied last week, just as they were set up to do.

The rally was partly inspired by “safe-haven” buying. As the broad stock market falls, nervous investors tend to sell off their stocks and park the money in the T-bond market.

But, let’s face it… Treasury bonds were so remarkably oversold going into last week, they were overdue for a bounce. And, the 15-minute chart of the iShares 20+ Year Treasury Bond Fund (TLT) I showed you last Monday suggested a rally could happen right away. And it did.

So, for today, let’s take another look at that 15-minute chart and see if we can figure out what will be the next move for the Treasury bond market… 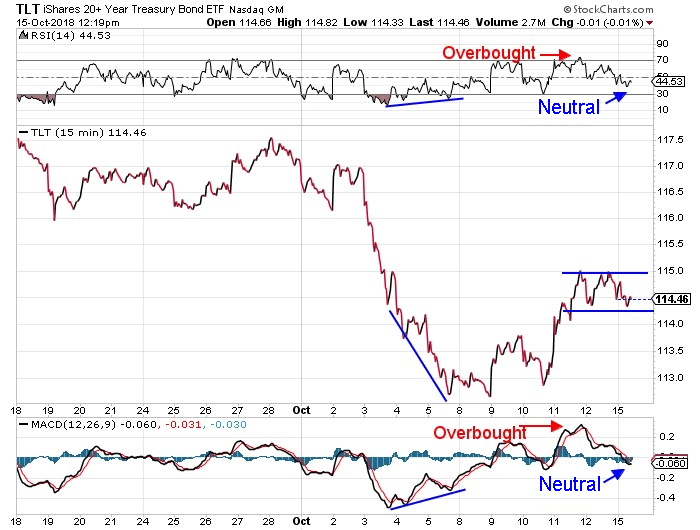 Keep in mind, this is a 15-minute chart. Patterns on this time frame typically start to play out within just a couple of days.

Last week, we noted that as TLT was declining in price, the MACD and RSI indicators were rallying. This “positive divergence” is often an early warning sign of an impending bounce.

That bounce started last Tuesday and carried through all the way to Friday.

By Friday, as TLT was bumping into $115, both the MACD and RSI indicators had stretched into overbought territory. Notice, though, there wasn’t any negative divergence on the move. In other words, as TLT pressed higher, the MACD and RSI indicators pressed higher as well. That’s a good sign that following any sort of pause – to relieve the overbought conditions – TLT will move higher again.

Starting on Friday and continuing through yesterday, TLT has chopped back and forth between $114.30 and $115 per share. During this consolidation period, the technical indicators have recycled back to neutral.

That’s bullish. TLT has worked off its overbought condition without giving back much of the recent rally. Now, there’s enough room for the technical indicators to start moving higher again and fuel another bounce.

And, since this is a 15-minute chart, I expect that bounce will get started within the next day or two.

In today’s mailbag, one Delta Report lifetime member is excited to meet Jeff at the Legacy Investment Summit this week…

Fortunately, I moved on from gold and decided it might be best to show my lovely spouse my trading account, which started as a small allocation of cash and has grown to well over six figures. Much to my delight, my wife was thrilled and now thinks Jeff is the “cutest thing she has ever seen!” I am headed to Bermuda in a few days and my wife and I are looking forward to meeting you in person!

One ounce of 24 karat gold mined a thousand years ago is still worth 1 ounce of 24 karat gold mined yesterday. The price of gold does not change, only the value of the currency we use to purchase it with changes. The only time that may vary is in a panic, or like the present, when paper contracts impact the currency. I use the word currency since our pretty pieces of colored paper are no longer money.

Not bullish on gold… more on silver and copper. I think of gold more so when the big correction starts as I feel the blockchain and bitcoin will be a better place to put your money. So, I agree with the responses on Jeff’s help for all of us. He’s a good man and helps us, thank you so much Jeff. You are one of a kind in a “buy me, buy me” market. I SO RESPECT YOUR OPINIONS AND ADVICE!!!

Have you been following Treasury bonds closely? Do you see another T-bond bounce in the future? If you have any other trading stories, questions, or suggestions, submit them here.