The price of natural gas looks ready to fall.

Obviously, that’s a contrarian view. Just about all the financial talking heads are bullish on natural gas.

They’re looking for it to continue the record-breaking rally that pushed the price of natural gas up 150% in 2022.

The technical setup looks “toppy” to me and I see that the odds favor a decline over the next weeks. 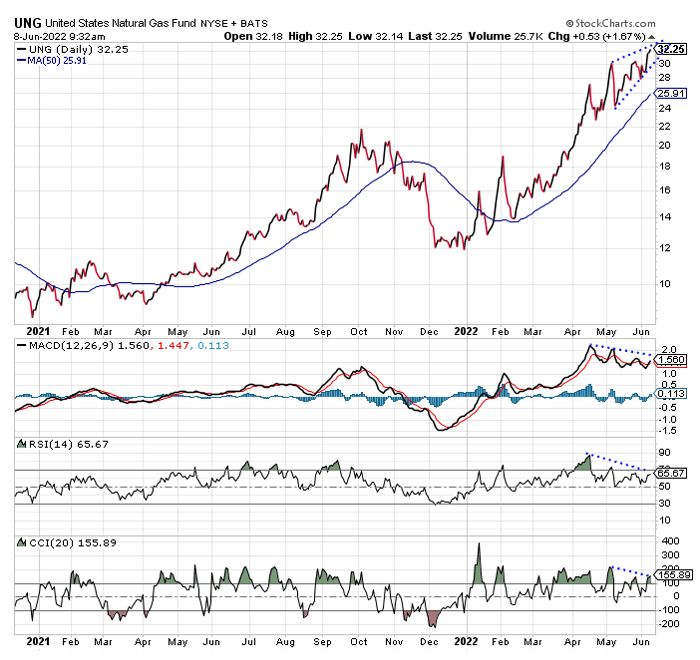 There are several potentially bearish characteristics in this chart…

First, the chart itself is morphing into a bearish rising wedge pattern.

This happens as the stock makes higher highs and higher lows. But the distance between each high and low narrows.

Most of the time, this action ends with the stock breaking to the downside of the wedge pattern.

There’s also “negative divergence” on the technical momentum indicators (MACD, RSI, and CCI) at the bottom of the chart.

While UNG has been pressing higher over the past two months, the momentum indicators have been falling.

This sort of negative divergence is often an early warning sign of a potential decline.

Finally, as we noted last September (just before a three-month decline), UNG rarely strays more than 8% from its 50-day moving average (MA – blue line) before reversing back toward the line.

So, it’s setting up for one heck of a reversal to alleviate its overbought condition.

Of course, these potentially bearish conditions also existed one month ago and nothing happened.

UNG is even higher today than it was back then. So, natural gas bulls will argue that none of this matters.

Macro conditions – like the Ukrainian invasion and increased demand for energy – will keep pushing the price of natural gas even higher.

But I’ll argue that the current price of natural gas already reflects the macro conditions. That’s because the market tends to discount these factors ahead of time.

On the other hand, technical conditions suggest we’re at least reaching a short-time top in the price of natural gas… and we could be setting up for a significant reversal.

It seems natural gas is more likely to be lower in the weeks ahead.

Based on current conditions, which way do you think natural gas will move?