This week’s stock market action has likely signaled a short-term turning point from bullish to bearish.

The S&P 500 gapped above the 2800 resistance level early on Monday. The index ran as high as 2813 before a last-hour decline pushed the index back down below 2800.

The S&P 500 still closed in positive territory on Monday. So, we can’t really call it a reversal day. But the action was weak. And, that sort of weakness, following a long, nearly-one-way move higher often marks at least a short-term top. 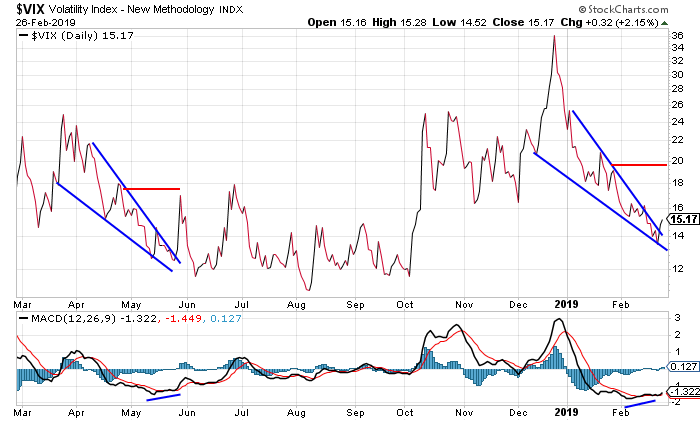 The VIX has formed a bullish falling wedge pattern with positive divergence on the MACD momentum indicator. This pattern most often resolves with a breakout to the upside. If that happens here, then the VIX could run up towards the 19 level. And a rising VIX most often occurs with a falling stock market.

The last time the VIX displayed a similar pattern was in late May last year. That led to a very fast, 100-point decline in the S&P 500 in June.

The S&P 500 closed yesterday more than 6% above its 50-day moving average. The index rarely strays more than 5% away from the line before reversing course and heading back.

So, the market is certainly ripe for a pullback. The question is “When will the pullback start?”

As I’ve written repeatedly, we can’t get too bearish until the S&P closes below its 9-day exponential moving average (EMA) – now at 2775.

But, with the chart of the VIX on the verge of breaking its falling wedge pattern to the upside, I suspect the pullback may start as soon as today.

I enjoyed your webinar. It adds a lot to experience you “face-to-face.”

I’ve used short uncovered calls on trades when conditions were opposite of those you use uncovered puts, but I haven’t seen you mention that possibility. If the stock is in a downtrend and the current move looks exhausted to the upside, that’s the setup.

I’m ok, worst case, ending up short the shares. Uncovered puts are subject to surprise melt-downs which in general are nastier than melt-ups, yes?

Are uncovered put sells part of your trading strategy? What big winners have you booked?

Let us know at [email protected], along with any other comments or questions.

E.B. Tucker is famous for his track record of nailing big calls…

He still makes a 20% passive income stream from the moves he made right after the 2008 housing crisis. Last year, he strategically avoided bitcoin’s collapse… while making a 15,000% profit on a blockchain mining deal.

And right now, he sees an imminent turning point in the markets. One that could either wipe you out… or make you a millionaire.

Tonight at 8 p.m. ET, E.B.’s holding a special presentation he’s calling “The Stock Market Escape Summit.” There, you’ll learn all about his top investing strategies for 2019… how he knows the exact time to be a contrarian… and about a little-known type of investment that generates 10x more money than options – with lower risk…