Mike’s note: For years now, the Market Minute has provided timely trading ideas for you to speculate on and profit. Most often, those ideas are for short-term trades. But, not all speculations are…

Tom Dyson is a world-traveling analyst and investor. During a year of backpacking abroad with his family, he and his ex-wife drained nearly all their savings and retirement accounts of cash… and converted everything into gold and silver.

That’s because Tom believes there’s a massive shift playing out right now in the financial world. He’s gone “all in” on a radical new speculation and predicts it will outperform every other asset class in the world. It could even make you enough money to pay for an early retirement.

Tom’s hosting a webinar tomorrow night, at 8 p.m. ET, where he’ll give away one of his highest-conviction trades for you to act on right away. Click here to secure your spot… and read on below to hear Tom’s simplest “prescription to wealth”…

The one truth about speculation: The stock market is manic-depressive. It swings from oversold to overvalued every generation or so.

The simplest market-timing system, therefore, is to be a contrarian.

In my case, selling stocks also means waiting on the sidelines in gold. More below…

Our Contrarian Idea in Action

I first understood this idea at school, studying the Crash of ’29 and the Great Depression in history class.

I was just getting interested in investing. I bought my first stock at age 11, and it’s been my “guiding star” ever since.

The chart below shows that contrarian idea. It tracks the P/E ratio of the U.S. stock market going back 120 years.

(The P/E – or price-to-earnings – ratio measures how much investors are paying for every $1 of a company’s earnings.) 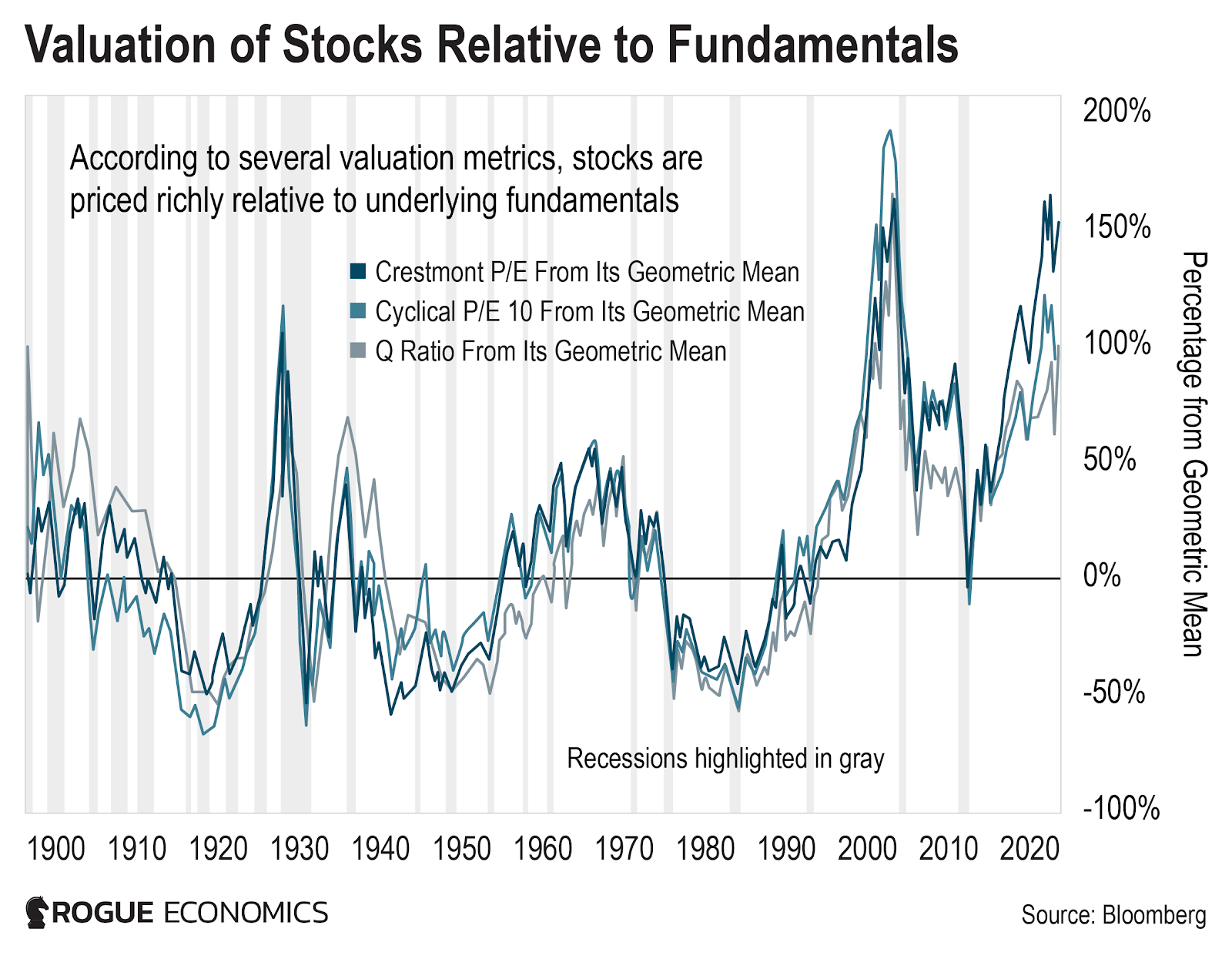 You don’t need to understand everything that’s going on in this chart.

Just notice how valuations have oscillated around the mean (the horizontal black line). They’ve been moving between overbought and oversold.

And notice the towering peak in 1999.

It was with this perspective that I watched the tech-stock mania and the bursting of the bubble in 2000.

The internet and technology had caught the public’s imagination.

Taxi drivers were recommending stocks. Grandmothers were forming investment clubs. And the press was talking about a “new era” in which stocks would never fall again…

“This is straight out of the textbooks,” I thought at the time. “A classic mania.”

I didn’t have any money to invest back then. I had just graduated from university.

But I did have the insight that this moment would positively, absolutely mark the beginning of a new market cycle… that gold would outperform stocks… and that valuations had begun their long walk down the mountain.

That was 20 years ago. Since then, gold has outperformed stocks by about 5-to-1. And I’ve been bearish on stock market valuations the whole time. I’ll continue to be bearish on them until we reach the cycle trough.

If my hypothesis is correct, the prescription is simple: own gold, sell stocks.

When we reach the cycle trough, it’ll be time to sell gold and buy stocks. But that’s still years away. For now, gold is the place to be. Stocks are the place NOT to be.

But how do we know when we’ve reached the cycle trough? For that, I follow the Dow-to-Gold ratio.

It tracks the Dow Jones stocks as priced in gold. And it tells us the best times to buy gold, and the best time to buy stocks.

You buy stocks when they are cheap relative to gold. That is, when the Dow-to-Gold ratio is below 5.

You sell stocks when they become expensive – when the Dow-to-gold ratio rises above 15. At that point, you sit in gold until stocks become cheap again (in gold terms).

Editor, Postcards From the Fringe

P.S. I’m about to embark on perhaps the biggest speculation of my career… and I invite you to come along with me.

If you’ve been reading my work, you know I’ve already invested nearly $1 million of my own money into gold bullion. That’s because I see a true financial reckoning taking place in the coming months. But there’s much more to my strategy than that.

I can’t give you the full details here, but I believe a specific handful of companies will
benefit greatly from the trends I see coming.

Join me tomorrow night, at 8 p.m. ET, where I’m sharing the details in an urgent briefing. Save your free spot right here.