Nothing the Fed says really matters.

The Fed’s decisions, meetings, and press conferences are disappointingly irrelevant.

That’s because the market knows with almost pinpoint certainty how their “data driven” approach will play out.

So, investors who want to cut through today’s noise will need to stick to one reliable theme that’ll stand the test of time…

Either your earnings are growing or they’re regressing.

If investors can segment the market this way, then they’ll survive the ups and downs of an economy that’s adjusting to inflation – and now officially transitioning into a recession.

Although this dichotomy is clear in 2022, it was disguised in 2021. For example, the chart below shows performance between the “haves” and “have nots” of the S&P 500. 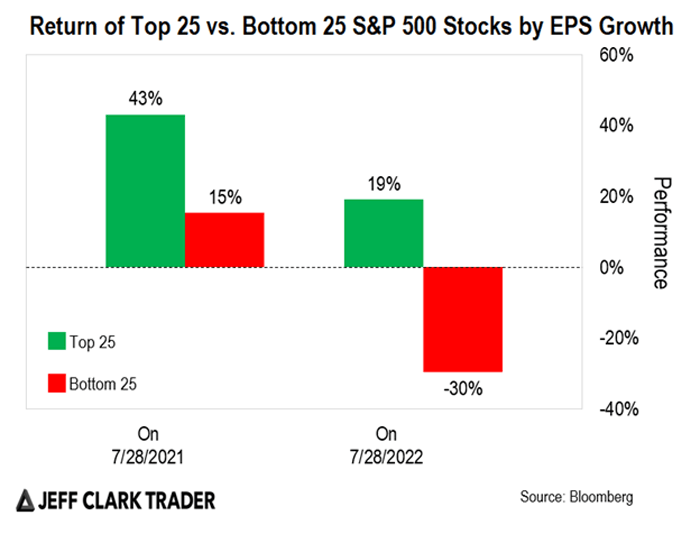 Now that the bubble popped, a rising tide no longer lifts all boats.

But the spread in performance between these baskets of stocks has grown from 30% to 50%.

The difference in performance will only continue… with no need to interpret what the Fed’s next mistake will be.

Right now, I see a big opportunity to deploy this kind of strategy within big tech.

Eventually, they’ll diverge and that’s where the opportunity is.

Now that the market has reached the 4025 target I called for on June 28, it’ll begin to splinter in a more pronounced way.

The relief rally has recently lifted all boats once again. Now, it’s time for divergence to take hold.

To see what I mean, let’s go over some big-name tech stocks…

Part of the reason the performance has been so close recently is because investors have been “bottom-fishing” in Netflix (NFLX). Bottom fishing refers to investing in assets that’ve experienced a decline and are considered undervalued.

NFLX fell 72% at it lows this year. And since people are conditioned to believe everything goes up at some point… NFLX may have seemed like a good play from a technical angle.

Recently, it got an extra earnings boost from a report that wasn’t as bad as people thought it would be.

But the bottom line remains… Netflix is an old hat with a bad growth story.

In fact, NFLX should be valued no higher than Comcast, CBS, or other media names.

The problem with media stocks in general – whether content-related like NFLX or social media like META – is that you’re only as good as the current social trend. And social trends are fickle.

Consumer preferences change fast. Facebook (META) is no longer popular, which is why it trades for a 15X price-to-earnings multiple (P/E). At its peak, META traded around a 28X P/E last September. The 72% drop in NFLX shows it’s not popular anymore either.

Active usership in NFLX is waning… The competition is everywhere. Everyone with a platform is in the streaming business. Big names like Apple, Disney, and even Amazon threaten Netflix’s share of the streaming pie.

But Amazon (AMZN) has a different problem. It just can’t figure out inflation… and maybe never will. As inflation grows, consumers spend less on goods.

If inflation persists, I could see AMZN transforming into a different type of company that’ll lean more heavily on its other revenue segments like cloud computing segment AWS (Amazon Web Services) than on its retail business. But for now, it just can’t get past inflationary pressures and its growth rate is showing that.

But then, take a company like Apple (AAPL). Aside from decent growth, think about AAPL like this: inflation or not, people will spend their last dollar to get the new iPhone.

Tesla (TSLA) might be overpriced for its growth, but I’d rather own it than NFLX.

Nvidia (NVDA), Microsoft (MSFT), and AAPL are the sweet spot for tech exposure. They have lots of growth and are reasonably valued.

July’s market rally may pause a bit here. There are strong indications that (at least technically) it’s overbought.

But the bigger question is the takeaway from this earnings season. Which according to the results, is a clear division between the “haves” and “have nots.”

What are your thoughts on this earnings season?