The next decline could be a lot worse than the last one. At least, that’s what the “crystal ball” is saying.

It has been three weeks since we last looked into the stock market’s crystal ball. Back then, Volatility Index (VIX) call options were about twice the price of VIX put options – a condition that often leads to a short-term rise in the VIX, and a short-term decline in the stock market.

Sure enough, we got that decline.

On Monday, the crystal ball warned of another short-term decline. This time, though, it could be much more severe.

In other words, traders were willing to pay 15 times more to bet that the VIX will be higher one week from now rather than lower.

If we go out to the March expiration, the price disparity is just as extreme. The VIX March 17 $21 calls closed Monday at $6.10. The equivalent puts were priced at only $0.60.

This is a much stronger warning sign than we got three weeks ago, when the VIX was at the same level. And, traders should pay attention to it – especially considering how similar today’s conditions are to last year. 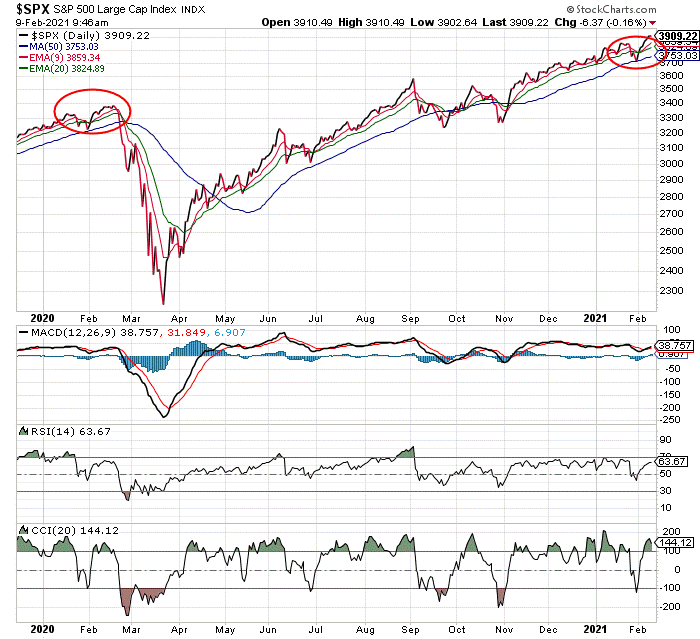 We first looked at this chart a little over a week ago when the S&P 500 was testing the support of its blue 50-day moving average (MA) line. We noted how similar this chart, and all of the technical indicators, were during the same time last year. And, we figured the market was setting up for a bounce.

That was the good news. And, so far, that good news has played out as the S&P recovered everything it lost during the late-January decline… And has since made a new all-time high.

The bad news, of course, is that if the similarities to last year continue, then we’re headed for a much more significant decline. And, that’s exactly what the VIX option prices are suggesting is going to happen.

P.S. Although we use our “crystal ball” to follow the patterns and movement in the markets, it may not always produce big returns. That’s why I use a method most people have never heard about and it might even seem unusual…

It’s a simple strategy using just three stocks that could consistently make you money – with minimal effort. I should know, I’ve been using this strategy for over 36 years, and it’s helped many people from all walks of life retire early… Including myself.

Just click here to learn more about how to fund an early retirement using these three little-known stocks.

Are you prepared for a large decline in the market soon? Or do you think that it’ll keep moving higher?