After lagging behind the broad stock market for the past several weeks, one particular sector looks ready to take the lead.

Don’t get me wrong… I’m still wary of the action in the broad stock market. There are too many warning signs, too many negative divergences, and too much speculative activity to not be worried about a sudden decline that appears to be coming from out of nowhere.

At the same time, though, if money starts coming out of the high-flying, momentum-driven technology stocks that have been leading the market higher for so long, well… that money has to go somewhere.

And, my guess is it’ll go into the financial stocks.

The average stock in the Financial Sector Select Fund (XLF) – an exchange-traded fund (ETF) of financial stocks – trades for about 12 times its earnings. And, XLF pays a dividend of 2.6%.

In other words, XLF trades for about half the earnings multiple of the S&P 500, and it pays a dividend that’s nearly double the dividend. So, the financial sector is fundamentally cheap.

But, it’s the technical picture that looks bullish to me.

For the past six weeks, XLF has been chopping back and forth in a relatively tight trading range between $22.75 and $24.25. This consolidating action has allowed all of the various moving averages (the squiggly lines on the chart) to coil together. This is the sort of action that builds energy to fuel the next big move.

XLF is trading above all of its moving averages. That’s typically a bullish setup. The slight decline in the financial sector on Friday tested the moving averages as support.

Support held. XLF bounced off of its moving averages and ran back up towards the $24.25 resistance line. If it can get above this level, then the next resistance is up near $27.

On the other hand, if XLF turns back from this resistance level, then it has support immediately underneath at the bundle of moving averages all coiled around the $23.50 level. If XLF breaks below support, traders can exit the position for a modest loss.

So, basically, buying XLF right here gives traders $3 of upside potential versus about $1 of downside risk.

That looks like a good setup, even in a market that’s as overheated as the current environment.

P.S. Lately, the financial sector has been a good place to trade. That’s why I’ve been recommending options trades on XLF to my Jeff Clark Trader subscribers over the past few months.

Our most recent trade, which we recommended just yesterday, is up 18.8%. And, from what the indicators have been showing me, it should climb much higher.

Jeff Clark Trader members were the first to get this recommendation, but you can be a part of it, and future recommendations, for just $19. You’ll not only get my handpicked trade ideas, but also access to my 8-part video training series, a group of educational special reports, and quarterly Q&A sessions with me.

If you’d like to start learning more about options using my decades-long expertise, and see just how trading a few stocks can help you retire early like I did, click here to learn more…

I’ve been a subscriber for two years, but I’ve watched your ideas for many years before I decided to subscribe. I’ve always appreciated your ideas, so, thank you.

I thought I should respond after hearing that you’re receiving many negative emails. During times like these when nothing seems to make sense, and one hears of “Robin Hoodies” bidding up markets amidst an economic disaster, it throws lots of curves.

I talked to my mechanic during the winter, and he took his unemployment money and started trading. Interesting, I thought! It sounds like the “Hoodies” are a force which I’d doubted at first.

Anyway, I’ve watched your ideas for many years and that’s why I respect them. You have a long-term reputation with me and that’s what I value. Of course, everyone has short-term difficulties with making predictions. I sure have had periods where I couldn’t do anything but lose money. I just wanted to support your top-performing ideas in my mind. Thanks so much for the help.

Nick Giambruno, of Casey Research, just got his hands on a leaked plan from Speaker of the House Nancy Pelosi… And it’s downright scary.

If you’ve got over $5,000 in a U.S. bank, credit union, or in a retirement account… You are at risk. The idea behind Pelosi’s plan has the backing of Bill Gates, the Clinton Foundation, Visa, J.P. Morgan… Even the Fed is getting ready for “the switch.”

All evidence suggests it will get under way January 1, 2021. 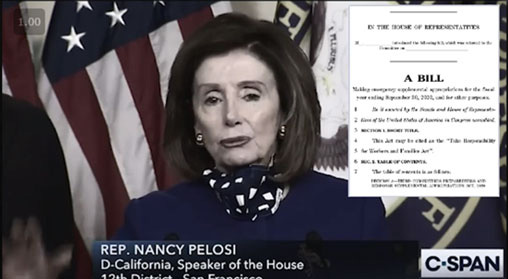