The talking heads are all bearish again.

That means the stock market is likely headed higher this week.

Of course, it’s tough to be bullish on stocks right here – especially considering the drubbing most stocks took last week. The S&P 500 lost nearly 2%, the Russell 2000 dropped almost 3%, and the technology-heavy Nasdaq Composite Index got slammed by 4.5%.

It was an ugly way to start the year. And, that ugliness caused a lot of stock market bulls to rush over to the bear camp…

No matter what financial television station you turned to on Friday, the talking heads were bearish. Many of them predicted that last week’s selloff was the start of a 7% to 15% correction in the stock market.

Maybe that’s true… Heaven knows the major stock indexes have been running hotter and higher for so long that we’re overdue for a meaningful pullback.

But, whenever so many analysts get so bearish so quickly, it almost always leads to a sharp, oversold bounce. And, that’s what I expect we’ll see this week.

The index closed Friday right on the support of its blue 50-day moving average (MA) line.

The last two times the S&P challenged this support level, the index bounced off of it with a strong, one-week rally. Similar action this time around could have the S&P back up near all-time highs by the end of this week.

Another argument in favor of a short-term oversold bounce is the “positive divergence” on the 15-minute chart of the S&P 500. 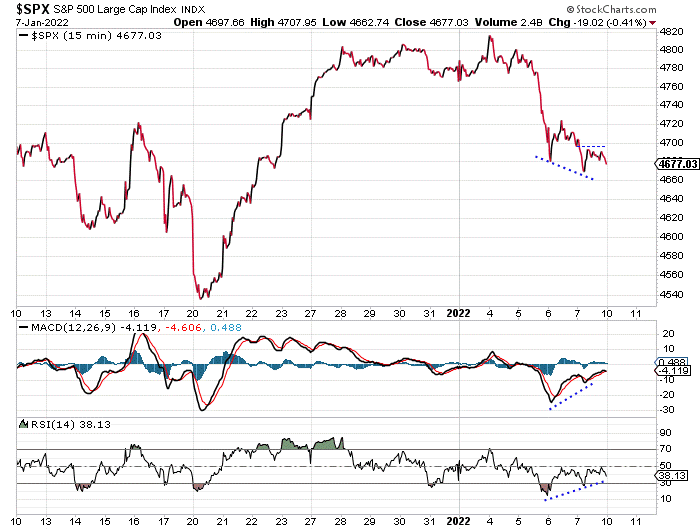 As the index dropped to a lower low on Friday, the Moving Average Convergence Divergence (MACD) and the Relative Strength Index (RSI) momentum indicators at the bottom of the chart were making higher lows.

This sort of positive divergence tells us the momentum of the decline is fading. It’s often an early warning sign of a potential rally.

Patterns on a 15-minute chart tend to play out within just a couple of days.

So, if stocks are due for an oversold bounce on the basis of this chart setup, then the stock market should be higher within just a few days.

Granted, the talking heads may be proven right a few weeks from now. Last week’s action was damaging to the stock market. And, we could indeed be on the verge of a stronger correction.

But, big declines don’t usually happen when everyone is looking for them. And, given the potentially bullish setup in the intraday charts, I suspect we’ll likely see a bounce this week.

Traders should use and decline today as a chance to buy in anticipation of at least a short-term bounce.

Do you see a market correction happening soon, or will it keep going higher?