It looks like both the bulls and the bears will get a chance to profit this week.

For today and tomorrow, I think the bulls get the benefit of the doubt. But later in the week, there’s a pretty good chance the bears will take control. 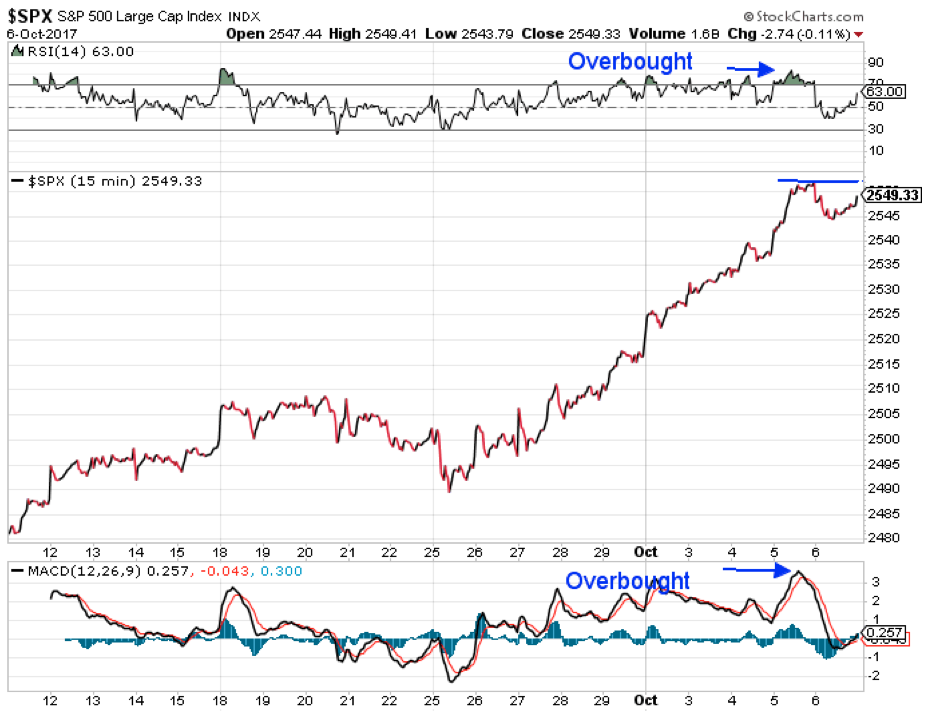 While the S&P 500 was making new highs last Thursday, both the moving average convergence divergence (MACD) and Relative Strength Index (RSI) momentum indicators were hitting extremely overbought territory. So it wasn’t too surprising to see a little bit of selling pressure on Friday.

Notice, though, how neither the MACD nor the RSI developed “negative divergence” at the highs. In other words, as the S&P 500 made new highs on Thursday, the momentum indicators made new highs as well. This tells us that, at least on this short-term timeframe, any pullback will be temporary. It will likely be followed by another attempt to rally to higher highs.

As the S&P 500 pulled back on Friday, both the MACD and RSI worked off their overbought conditions and dropped back into neutral territory (that’s around zero for the MACD and 50 for the RSI). So now there’s enough energy to fuel another rally attempt. And, since this is a 15-minute chart, any rally should play out within the next day or two.

That will give the bulls a chance to profit.

But the bears will get their chance later in the week.

You see… The decline in the MACD and RSI indicators on Friday was significant enough that if the S&P reaches new highs today or tomorrow, the momentum indicators are most likely NOT going to hit new highs. That failure will create negative divergence on the chart. And, negative divergence often leads to a more significant pullback. So, bullish traders can buy stocks this morning in anticipation of another push to new all-time highs.

But keep an eye on this 15-minute chart. If the MACD and RSI indicators don’t keep pace with the index, then you’ll want to take profits quickly.

Bearish traders should wait until we get negative divergence on this chart before trying to short stocks. Then they can add some short exposure in anticipation of a more significant decline later this week.

P.S. Which side of this trade will you be on this week? And how will you be playing it? Send in your thoughts – along with any questions or suggestions – right here.

I’m going to cash in everything but gold and silver and lithium as soon as earnings season is over.

Nobody sees this coming. Devastation soon. I’m watching Trump, too. He’s signaling a move that will shock the world. If he succeeds in taking out Kim Jong-un, great. If he fails like Carter in Iran, look out.

Time will tell and I might be wrong, but I feel your bullishness on the precious metals sector is early. While the indicators may have flashed buy signals, which could work out for a short-term bounce, the Commitment of Traders (COT) reports still look bearish to me. The spot silver chart has dropped below the 50-day and 200-day moving average but the commercial short position is still slightly less than 400M ounces vs. 125M ounces from 7/18/17. Gold has not yet broken its 200-day moving average to the downside although it has broken down below the 50-day MA. The commercial short position in gold is also way too high for a sustained rally to the upside vs. how it was in July.

The problem is that the commercials have never been wrong about the long-term trend (except for a brief period in 2011). While your indicators may work well for a quick trade, and I hope they do, the COT paints a picture of continued price deterioration in gold and silver. The strong dollar is confirming this, and until the COT reports can approach the situation from back on 7/18/17, I don’t believe that any short-term bounce is sustainable. However, I do believe your indicators may very well hand you profitable trades, and I know you like to play bounces from overextended conditions, so good luck. Just be careful not to overstay your welcome!

I have been with you for quite a while now. The one thing I have learned is to not worry if I don’t get into every trade. With the job I have, it is not easy to get online and check things out all the time. I find I can usually get in quite a few trades if I wait a day or two. The Macy’s trade, for example, I was not able to learn about until the next day. But I got the $22 call and was able to generate a profit.

It took me a long time to think the right way. Always trying to buy too much, trying to get every penny and into every trade only made me go broke. Now I am relaxed, enjoy it a lot more, and if I get in I get in. If not, there will be another one. Thanks Jeff and have a great day! P.S. I have learned more than that!

I must admit that I feel overwhelmed. When I called my broker to open an account so that I could trade options when I had a recommendation from you I thought the process would be relatively simple. When I was finished talking with him I was thoroughly confused and now realize that I have a great deal more work to do before I understand. I am going to work at it but I hope that I have not bit off more than I can chew.

Stephen, make sure you check out our Training Center and watch lessons 1–3. There, Jeff will walk you through the fundamentals of option trading and show you that it’s not as daunting as your broker made it seem…

My husband and I purchased your Delta Report – and watched the training videos today. We wanted to participate in your trade mentioned today for ABX. However, we are unsure and not comfortable completing the trade without the information in the “Order type” or “Time in Force” (day/good till canceled/fill or kill/immediate or cancel) block provided.

We understood all of the other blocks… can you provide further clarification/instructions for those two blocks? Thank you very much…

Debra, this recent Delta Direct post should be able to answer your questions about “Order Type” and “Time in Force”…