You see, buying into a stock that’s falling sharply is generally a bad idea. While picking the bottom of a stock can lead to massive gains… if you buy at the wrong time, it can also lead to big losses. And, frankly, most of the time… that’s what happens.

Let’s start by looking at an example.

Take a look at this chart of Lululemon Athletica (LULU), the sports apparel manufacturer known best for its line of yoga clothes… 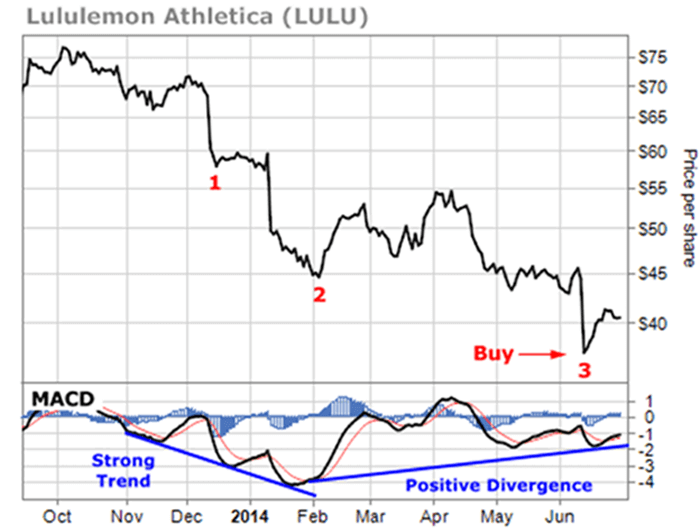 Back in December 2013, LULU shares dropped nearly 20% overnight (point 1 on the chart) in reaction to some bad news from the company.

Now, it doesn’t matter what the actual news was. The important thing to recognize here is that this was NOT a good time to buy shares of LULU. Bad news is usually NOT a one-time event. There’s almost always a second shoe to drop.

The MACD indicator helps to gauge the overall strength of a trend.

For example, if a stock is dropping to new lows and the MACD indicator is hitting new lows as well, then the downtrend is strong and likely to continue. 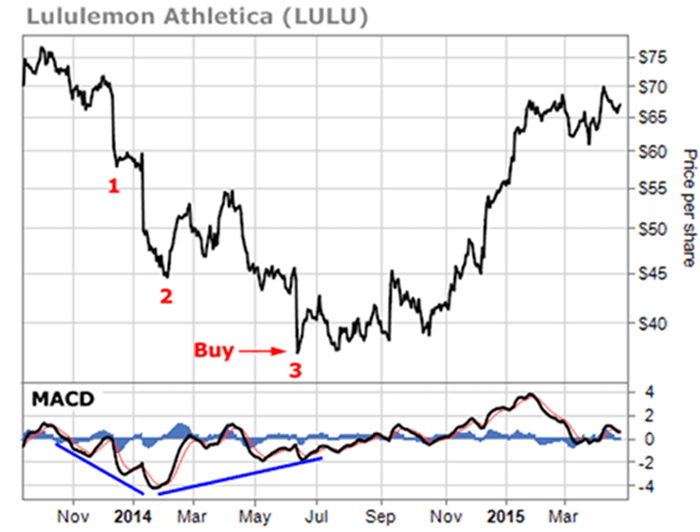 As you can see, LULU’s June 2014 low marked the bottom for the stock. But LULU didn’t mount a sustainable rally right away. Instead, the stock chopped around for a few months in a relatively tight trading range.

Then, it exploded higher. Anybody who caught the falling knife in June 2014 was sitting on around a 75% gain by the following March – just 10 months later.

In today’s mailbag, Sunny comments on Eric’s chart from his essay on Tuesday…

I loved your graph on intraday price/volume. Thanks, and keep up the amazing work!