For the first time in a long time, the tech-heavy index finished the week lower than where it started.

By itself, that’s not a big deal. But, it was the magnitude of the decline that’s concerning.

You see, this is the first time since the rally off of the March lows began that the index closed below its 20-day exponential moving average (EMA). 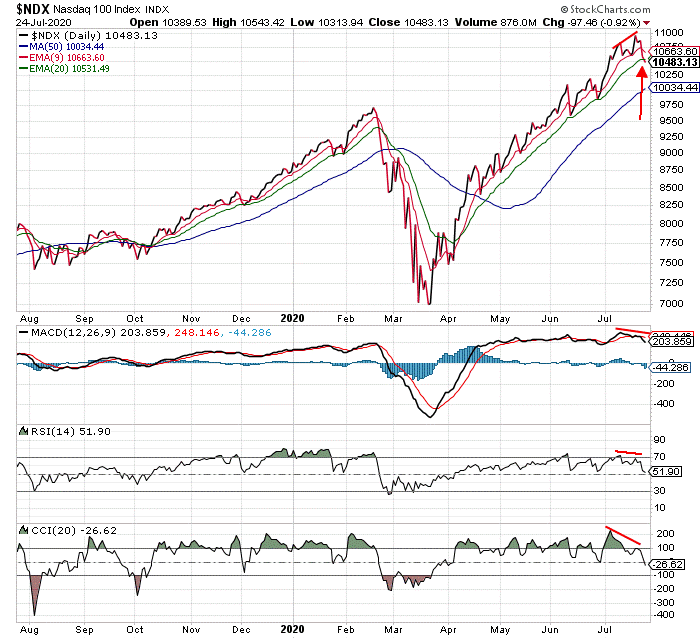 The squiggly green line on the chart is the 20-day EMA. You’ll notice that every pullback since the start of the rally found support at the 20-day EMA and bounced off of it. Last week’s decline, though, was strong enough to break that support. Now that line, and the 9-day EMA above it (the red line), are resistance on any rally attempts.

Maybe that doesn’t mean anything. Maybe the tech stocks will rally this week and we’ll get back into “bull mode.”

Or maybe it was a warning shot.

I can’t help but notice the similarities between this most recent rally and the rally phase that occurred from last October until February. Back then, the NDX moved nearly straight up for about four months. Every slight decline found support at the 20-day EMA. And, as a result of that straight-up move, the NDX stretched quite far above its 50-day MA (the blue line), and all the moving averages expanded far away from each other.

Then, in mid-February, once the NDX closed below its 20-day EMA, we got the corrective decline that took back all the gains from the October low.

Of course, that doesn’t mean we have to see the same sort of decline this time around. But, let’s face it… the Nasdaq 100 Index is quite extended here. It’s trading historically far above its 50-day MA.

Four of the biggest components of this index (AAPL, GOOG, FB, and AMZN) are scheduled to report earnings this week. The bulls might attempt to rally the NDX ahead of those reports. But, based on the look of this chart, most traders should probably be sellers on any rally attempt.

Do you think the tech sector will bounce back next week? Or will this corrective move accelerate?

Let us know your thoughts – and any trading questions you have – at [email protected].