But our friend and colleague, Jeff Brown, has a different tack when it comes to investing. He prides himself on consistently spotting revolutionary tech trends far ahead of the mainstream. And he recommends the best plays on those trends to his subscribers, handing them big returns on their money over time.

For the past year, Jeff has been pounding the table on one such trend. It’s just starting to enter public awareness… which means the investment opportunity is pulling away from the station.

But what is 5G? And what does it mean for investors?

5G will be the most incredible communications infrastructure build-out of our lifetimes. It will transform our lives and enable us to do things we could never have done before. All told, it will usher in $12.3 trillion in wealth.

And for investors, it’s a once-in-a-decade investing opportunity…

The History of a Network

If you have a modern smartphone in the U.S. – or the developed world, for that matter – it’s likely that you’re using a fourth-generation (4G) wireless network. About once every 10 years, the world goes through a major wireless infrastructure build-out.

4G led to an explosion in mobile data usage. It enabled companies like Uber, Snapchat, Google Maps, and Facebook Messenger to become regular parts of daily life. Deployed in the 2010s, 4G had a significant increase in data bandwidth.

It enabled internet browsing and streaming of high-quality video as well as voice over IP technology (basically, free phone calls anywhere in the world using services like Skype or any kind of messaging application).

Most of us can’t imagine our lives without these now “basic” features at our fingertips.

But all of the additional functionality of 4G came with a cost. 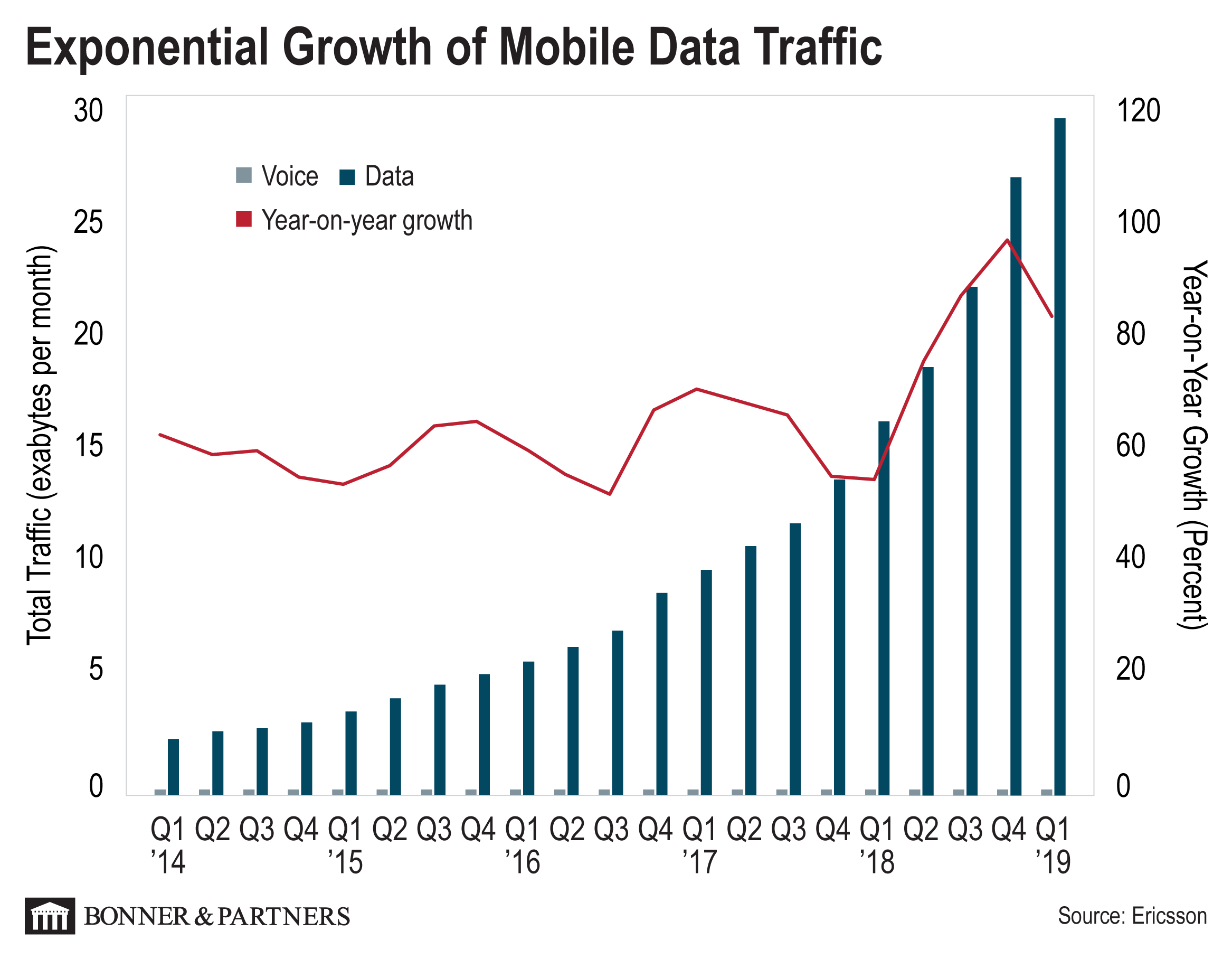 The chart above shows the amount of data and voice traffic transmitted over the world’s wireless networks since the first quarter of 2014. And it shows the exponential growth in demand for sending and receiving data (like images, music, and websites) over wireless networks.

The amount of voice traffic (in gray) has been roughly constant over the last five years. But what’s striking is that data (in blue) has exploded. In the first quarter of 2019, nearly 30 exabytes of data were transmitted per month. This almost doubled from the start of 2018.

An exabyte is equivalent to 100,000 times all the printed material in the Library of Congress. All the words ever spoken by human beings can be contained in five exabytes. It’s hard to get your head around.

So what does this mean for internet users?

Have you had a dropped call in the last 12 months? Or how about when you dial a number and someone picks up, but you can’t hear them? Has the internet been slow to download a web page? Can’t seem to download or send your email?

These issues are almost always due to network congestion. Just like when there’s a traffic jam on a highway and the cars aren’t moving… there can be too much data on a wireless network – and the digital packets of information just can’t get to where they are intended to go.

The problem is compounded by the growth of other technologies, such as the Internet of Things (IoT), which is bringing “connectivity” to everything from your toothbrush to your doorbell.

So how does 5G solve this problem?

5G to the Rescue

Typical speeds on a 5G network will be as high as 10 Gbps (gigabits per second), which will be 100 times faster than what a U.S. consumer experiences in the U.S. today with 4G.

With that kind of speed, you’ll be able to download a two-hour movie in 10 seconds. Dropped phone calls and slow-loading web pages will be things of the past.

And there will effectively be no latency (delay) over 5G networks. Latency will drop by 99% from more than 100 milliseconds down to a mere millisecond.

And 5G-enabled smartphones will be able to send and receive data and information through four separate antennas through the wireless network.

And it will enable other equally amazing technologies. With self-driving cars or remote surgeries, for example, you’re going to want extremely low latencies. It will be the difference between life and death. And 5G will deliver.

So How Do We Get There?

5G will arrive in three phases.

In Phase One, we are seeing the physical network build-out – infrastructure (towers, fiber-optic networks) and equipment (antennas, base stations, routers, and switches).

The 5G network architecture has changed compared to 4G. 3G and 4G technology used wireless towers that could cover 30-45 miles over flat terrain.

Today, there are about 200,000 4G cell phone towers scattered across the U.S. Yet, when the 5G network is constructed, there will be more than 1,000,000 cell phone towers to support the higher bandwidth, higher speeds, and new services delivered over 5G.

Phase Two involves the adoption of wireless devices (smartphones, tablets, home routers, etc.) that run on the new 5G network and the components that go inside them. Many providers are releasing 5G phones this year, and Apple plans to release its first 5G phone in 2020.

Phase Three will focus on services – companies deploying services that take advantage of the 5G network.

All told, 5G is expected to unleash $12.3 trillion in wealth over the coming years. It will be the biggest investment opportunity of the next decade.

If you’re an investor, this is a trend that needs to be on your radar. Entire industries will be disrupted. Some “sci-fi” tech will become a reality. And yes, fortunes will be made.

And this unstoppable technology isn’t years away. It’s nearly here.

P.S. What sort of returns can we expect for the 5G boom?

And if you’re serious about investing alongside 5G, be sure you bookmark this date: August 22 at 8 p.m. ET. On that night, I’ll be hosting the 5G Investment Summit.

I’ll show you my checklist for picking the best 5G stocks, I’ll even give you the name of my No. 1 5G watchlist company. Save your spot here.