Most investors panic when the market crashes. They get paralyzed, ride their losing positions all the way to the bottom… and sell at the absolute worst possible time.

It’s always the same. Otherwise smart investors lose their minds and destroy their portfolios. And, that’s a shame. Because it doesn’t have to be that way.

Market crashes are actually a MASSIVE opportunity to multiply your money several times over. But, you have to be nimble. You must be willing to do the difficult, often painful thing…

To go against the crowd.

Today, I want to walk you through how I did exactly that back in 2008. It was one of the best trading years of my career. And my subscribers at the time would likely say the same…

When I make a trade, one of the main things I look for is overstretched conditions. That’s when the proverbial rubber band gets stretched so far in one direction, the inevitable “snap back” to normal conditions is rapid and violent. There’s never been a better year for that than 2008.

Not to bring back any painful memories, but the S&P 500 lost over a third of its value that year. It was devastating for most folks.

But not my subscribers. While the market melted down, my subscribers made a 23% average gain per position. That’s counting all the wins and losses.

In late November 2008, the entire market was selling off. Consumer staples, precious metals, energy stocks… Pretty much anything that wasn’t a bond was getting crushed.

But, while the rest of the world panicked, we spotted an opportunity.

Take a look at this daily chart of silver – the same one I sent to my subscribers back on December 1, 2008…

Here’s what I said at the time…

The price of silver dropped to $9.38 per ounce yesterday. That’s about half of what it was selling for just four months ago. For the past six weeks, silver has been stuck in a trading range between $8.75 and $10.50. And you can see the positive divergence building on the MACD indicator.

If silver can break above $10.50, then the next resistance level is up around $13.50. Ultimately, though, I expect silver could rally back up to its summertime high at $19 per ounce.

Silver was clearly overstretched to the downside. It was in the process of making a higher low on the chart. And, the positive divergence on the MACD showed it was likely that silver would rally.

So, I set up a trade for my subscribers to take advantage of a coming silver rally. We bought the March monthly calls for around $0.60 per contract.

Not long after, silver spiked higher. Take a look at this chart of silver, from about two weeks later… 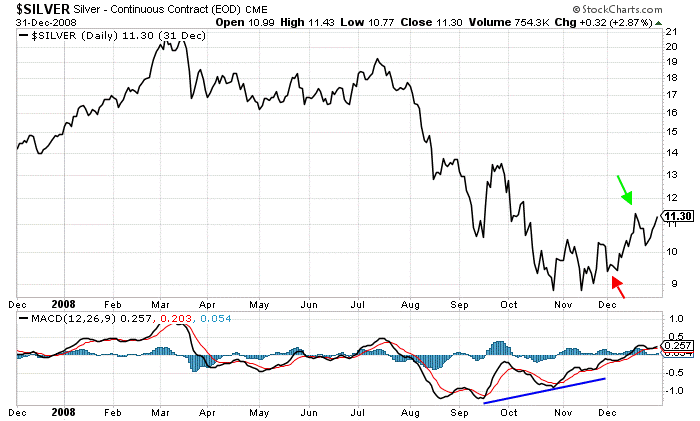 When the market crashes (and I believe it will soon), you shouldn’t panic. You should look for overstretched conditions, and realize how profitable it can be to trade them.

Once we enter that environment, look for the signs I showed you today: The positive divergence on the momentum indicators and higher lows on the chart. Those are telltale signs that an overstretched condition is due for a reversal.

P.S. Most everyday investors aren’t traders. They buy and hold, and hope to cash out at just the right time. But, as the last market crash taught us, it hardly ever works out that way.

If you want to protect what you’ve built up over this bull market – and even add to it – the time to become a trader is right now.

My new advisory, Jeff Clark Trader, has all the tools you need to get started – for just $19 per year. Click here for all the details.