There’s a lot of energy building up in the gold sector. There’s a big move coming.

But, I won’t be trading it – because the options market has already priced in the move.

GDX is set up to make a big move in one direction or the other. But, the options are priced so that the risk of being wrong outweighs the potential reward for being right. That’s not a good setup for a trade.

Take a look at this chart of GDX…

GDX peaked in mid-May at just above $37 per share. Since then, the stock has made a series of lower highs and lower lows. GDX closed Wednesday right on the support line near $32.70 per share. All of the various moving averages (the squiggly lines) have coiled together. So, there’s lots of energy to fuel the next big move.

If GDX breaks below support, then it will likely drop to the next support line at about $30. On the other hand, if GDX holds support and bounces from here, then it could quickly rally back up to where it started the month, near $35 per share.

So, there’s the potential for about an 8% move in either direction.

But, there’s no way to trade it because the option prices are already discounting the move.

But, it doesn’t make any sense when you consider you’d be risking 100% of the option premium in order to make that 28%.

So, like I said… there’s no trade here. Traders are better off waiting until GDX either rallies towards the next resistance level at $35 or declines to support at $30.

If it hits those levels while creating overbought, or oversold, conditions then we’ll have a better setup in which to trade it.

P.S. On Monday I’ll be holding the next quarterly Q&A session for my Jeff Clark Trader subscribers. There, I’ll answer my readers’ most-asked questions about the next move for stocks, gold, and my specific trading strategies.

If you’d like to get in on it, you should consider becoming a member of Jeff Clark Trader. In addition to this upcoming Q&A, Jeff Clark Trader members have access to an 8-part options training series, regular trade recommendations, and my 3-Stock Retirement Blueprint.

All these resources will teach you the basics of option trading, and make you some money along the way, for just $19. Click here to learn more.

In today’s mailbag, Trent shares an interesting situation he spotted…

Greetings Mr. Clark. The action in coffee looks notable. It’s near a low only visited a few times in the last several years. My understanding is that at less than a dollar, farmers are near-unable to make money.

As far as Arabica beans go, volatility in the Brazilian Real may be masking the ability of the price to go lower. I’m writing to request that you write about coffee in one of your Market Minute updates in the near future. Many thanks.

Thank you, Michael, for sharing your FOMO moment with us. I’m sure most readers have made their own trading mistakes, and I sincerely appreciate you sharing yours.

I’ve been investing for about four years and have made every mistake that I’ve eventually read about. So, it’s nice to hear that people “in the biz” occasionally make mistakes too.

Still, learning is half the fun, and I’m learning not to beat myself up when I make a new mistake. I’ll save that for when I make a repeat mistake. Thanks again for the great post.

“I WON’T be selling airline stocks.”

Now, take a look at this headline from a few weeks later (May 2)…

If you had tracked Wall Street’s DARK MONEY, you would have known something unusual was happening.

You can see it in the chart below. That big spike.

They discovered this dark money acts like a “truth detector”…

To see what Wall Street’s elite are REALLY DOING. 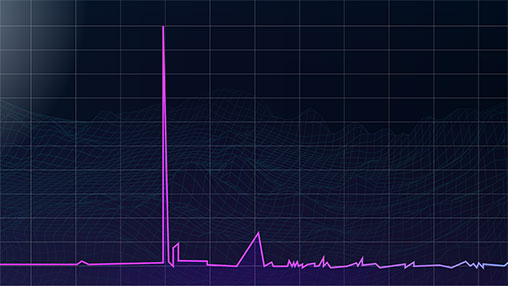