“Why wouldn’t the market just go straight up from here?” asked a concerned reader in response to yesterday’s Market Minute essay.

“The S&P 500 is breaking out. Investors are underexposed to stocks. I think we’re going to new highs.” 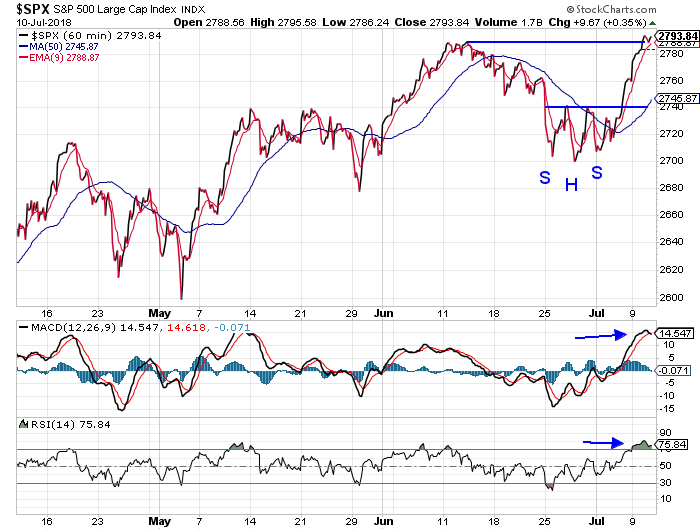 The S&P has more than met the target of the inverted head and shoulders pattern on this chart. In the process, technical indicators like the MACD and RSI are nearing their highest levels of 2018.

There just isn’t much energy left to fuel the market higher from here.

Technical conditions are simply too overbought to provide enough fuel for a breakout rally. At the very least, the market needs to chop around for a few days, consolidate the recent move higher, and allow the indicators enough time to back off from their overbought conditions. Then we can move higher.

The other scenario, and the one I view as more likely, is the market declines quickly and punishes the folks who bought into extended conditions yesterday. A drop back to the 2740-2755 level on the S&P would do the trick. Then we can talk about a possible rally to new highs (depending, of course, on the technical conditions).

So, for now I can envision only two things over the next few days… either a choppy consolidating market that sticks around current levels, or a quick drop down towards support in the 2740-2755 area.

Yes… we could press a little higher in the very short term. The market loves to test round numbers, and 2800 is just overhead. But I don’t think we’re setting up for a major upside breakout at this time.

It looks to me like the odds favor some downside action for the rest of this week.

Today, we hear from two Delta Report subscribers about their success with the service…

Jeff, thanks for the 2-day stock trade. I earned 3.2% gain buying on Friday morning and selling the next morning (today), and some could have boosted that to a 4% gain if they sold near end of day. I was skeptical Friday morning, given that I just exited the trade two weeks ago, and given its recent decline, but you wrote a well-reasoned write-up on why a bounce was nearly certain, and I love making 3%-plus in one day!

Thank you very much. I rely on your market assessments and trade recommendation heavily. You have allowed me to time my portfolio buys and sells much better and to increase my option trading income. Again, thank you.

Thank you, as always, for your thoughtful insights. We look forward to reading them every day. Keep them coming right here.