But one stands above the rest… commodities.

That’s because when they trend, they tend to trend hard.

One of the wildest things I’ve ever seen in my career was when oil went from around $18 a barrel to an all-time low of negative $37 a barrel in May 2020. Of course, I knew that this was possible theoretically, but I never thought I would see it in my lifetime…

So, if you’re a trader that loves looking for big moves, then commodities might be right up your alley.

And today I have another exciting commodity to show you – natural gas – a bonafide widowmaker in the trading world.

Renowned for its volatile price moves, natural gas has been in the headlines over the last several weeks.

With prices hitting record highs in Europe, and doubling in America, speculators all over the world have been trying to figure out how to take advantage of this parabolic move.

Jeff Clark last covered natural gas in Market Minute on October 20. In that issue, Jeff explained that parabolic moves are unsustainable. Eventually, they all come crashing down.

Many traders make the rookie mistake of trying to catch the top or bottom of a market. In my opinion, this is gambling and not trading… and it’s especially dangerous to do when a market has gone parabolic.

In my experience, it’s crucial to wait for confirming price action before committing your capital to a trade.

That means I’ll likely never catch the very beginning of a big move. But it’s the price I willingly pay to boost the probability of my trade working out in the first place.

We have that confirming price action in natural gas right now. Let’s look at the daily price chart below… 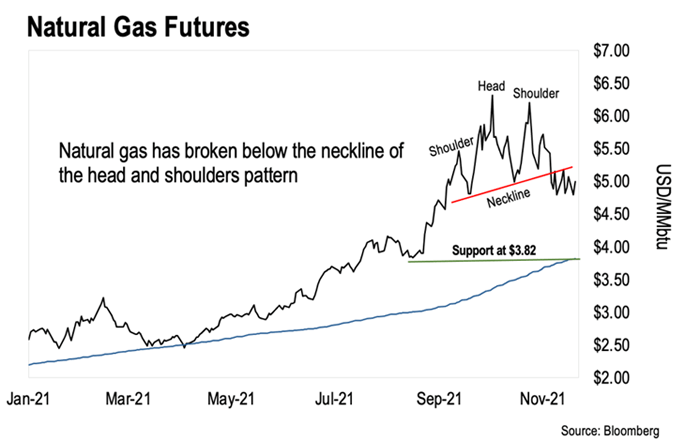 The key feature of this price chart is the large head and shoulders pattern that has taken shape between September and November.

Prices broke below the neckline (red line) on November 9. By breaking below the neckline, we can consider the head and shoulders pattern to have triggered. This is the confirming price action I was talking about above.

My initial downside target would be around the $3.82 level. That was the monthly low in August, and it could potentially behave as technical support if prices break down.

It’s also right around where the current 200-day moving average (blue line) comes in. That means there’s approximately 24% worth of downside ahead if we get a sell-off from current prices of $5.03 to the support at $3.82.

On the other hand, if prices start to trade back above that neckline, that would be a good signal to get out of any short positions. If you placed a stop around $5.46, that equates to about an 8.5% loss if the stop is reached from the current price at $5.03.

Overall, this represents a very favorable risk-to-reward opportunity. That’s the key to long-term success as a market speculator…

Stack the probability of a trade working out in your favor as much as possible and then focus on the opportunities that can at least triple or quadruple your money. Even if you lose a few trades in a row, one winner will more than compensate for those losing trades.

I’ll be keeping a close eye on natural gas, and I’ll be sure to update you as the price action develops.

If prices reach the support line around $3.82 and bounce, it could be time to go long. But if prices break below support, it could be a sign of further bearish action ahead.

What do you think will happen next with natural gas? Are you expecting the prices to go above or below the neckline?