Can we get three monster moves in three weeks?

Two weeks ago, we looked at the 60-minute chart of the Grayscale Bitcoin Trust (GBTC). It looked like it was only a couple of days away from starting a monster move one way or another. And we were leaning slightly bullish.

Since then, GBTC has gained 27%. It hit our upside target in just over one week…

Last week, we turned our sights to the S&P 500 (SPX). The 60-minute chart of SPX had formed a “consolidating triangle” pattern. It looked ready to make a monster move within just a few days.

The index could have broken in either direction. But, we gave the bulls a slight edge and figured the S&P could rally up to 2940.

So, we’ve seen two monster moves, in two different assets, in just two weeks. Today we’ll take a look at another 60-minute chart of another asset, and see if we can go three for three.

Just like last week’s chart of SPX, and the GBTC chart from two weeks ago, this chart of SLV has formed a consolidating triangle pattern. SLV is approaching the apex of the triangle. So, it’s likely to break out within the next few days.

An upside breakout projects a move to the resistance line at about $15. A downside break will likely lead to a move towards $13.

All of the various technical indicators (not shown) for silver are in neutral territory. So, neither side has much of an edge. But, my gut is leaning just slightly bearish on the metal.

Either way, since this is a 60-minute chart, and patterns on this time frame tend to play out within just a few days, silver should break out of the pattern this week.

Today in the mailbag, Jeff Clark Trader members write in with their experiences…

Hi Jeff! I decided to join the Delta Report after subscribing to Jeff Clark Trader. Your market calls have been remarkable! Scored a nice win on XLF, and it looks like the puts on SMH and XLK are going to be big winners.

I’ve been reluctant to trade naked calls and puts, but your substantive knowledge of the markets has proven it can be done profitably. Yes, there will be losers, but proper risk management can minimize the losses. I’m excited to be a subscriber and look forward to a very profitable experience with your services. Thank you!

I signed up for the Protégé Program to listen and learn from the best. I listen to Jeff’s advice and invest mostly in my spare time. I’m still working a full-time job, but if I pay attention, maybe I won’t have to continue working after a few more years of this. I hope to learn as much as I can from Jeff Clark with my current subscription.

I’m going to be super careful and very conservative with my investments, while using the options techniques to reduce my risk and earn a lot more by being active (maybe trading one time per week).

I have confidence, but I have still got a lot to learn. I don’t feel like I have enough knowledge to do this full-time yet, but I love learning this and I’m soaking it all up.

Jeff, I’m brand new to options trading and have been studying for about nine months. I’ve subscribed to two sites that suggest trades, but with no explanation. But I’m impressed by your approach and will follow your picks. I’m working with a small account now and usually only trade one or two contracts.

Dear Jeff, first of all, thank you for your invitation. I only got to know your trading style after signing up for Jeff Clark Trader. It was offered at $19 per year and was within my budget. After following you for a few trade setups at the beginning of this year, I began to grasp the way you approach the market and I liked it.

Prior to that, I had also signed up with another trading service with the remaining budget that I had. I realized I was late when I wanted to switch to your other service because I don’t have any more to spare.

If one day you are early to hand out pre-Christmas gifts for someone like me, please let me have an opportunity to learn from you. Thank you once again for your generous sharing. I love your trading ideas!

The War Against Capitalism

Why are Treasury bonds suddenly going down… when they should be going up?

Why is cash suddenly becoming so scarce… when the Fed is supplying hundreds of billions of dollars every week?

Stocks are down 30%. Is it the bottom… or is there more damage to come?

Our team of experts has been ready for this downturn for decades, and Bill Bonner is answering these questions in his urgent briefing that you can read right here.

There may even be a potential to profit, if you’re prepared…

Don’t wait, as this story is unfolding right before our eyes. 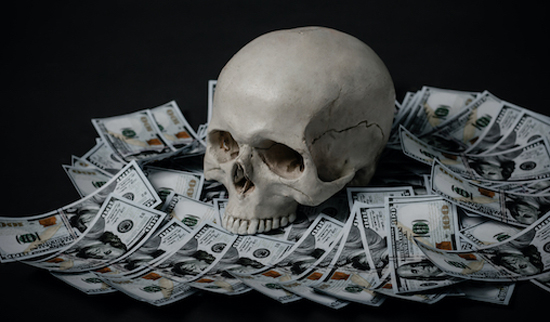