Back in May, Jeff Clark noticed the greenback was set for a short-term bounce.

Jeff pointed out that the dollar was technically oversold. And in early June, I explained how China’s policies will get its yuan to cool off – pushing dollar-sensitive commodity prices off their highs…

Sometimes, Jeff and I come to the same conclusion independently… and when that happens, my conviction grows stronger.

Now, it looks like we both agree on the dollar’s next move and it presents several opportunities in a market that is quickly running out of them.

But this was only supposed to be a short-term bounce… and the time to go the other way is here again.

Both the technical setup and the fundamental developments in the international interest rate market are pointing to a lower dollar once again.

Today, I’ll expand on this by exploring the effect of international interest rates on the dollar, and point to what that means for the commodities that are set to benefit most…

When the market references dollar strength or weakness, they’re usually referring to the U.S. Dollar Index (DXY) – which is a measure of the value of the dollar against a basket of currencies with its biggest trading partners.

Since Europe has the biggest weight in the index – currently at 57.6% – it means the euro will have the biggest effect on the direction of the dollar.

Of the European countries, Germany has the biggest economy, so I look at its fixed income market to help gauge where the euro is heading next.

And Germany’s rates have been outpacing that of the U.S. over the last 3 months.

Our 10-year inflation rate expectations – which continue to outpace Treasury rates – topped out in early May, falling 23 points from 2.56% to 2.23%.

But Germany’s rates haven’t had that kind of weakness.

It’s a pretty stable and reliable relationship. Although, the biggest blip happened during the start of the pandemic when the international demand for the dollar as a safe haven threatened the global economy more than the lockdowns themselves.

But as the economy continues to normalize, this relationship is trending back to its usual state… This means that rate differentials will continue to be predictive of the dollar’s next move.

It’s Not Just the Fundamentals…

From a technical point of view, let’s look at the 14-day Relative Strength Index (RSI), one of Jeff’s favorite indicators. The RSI is currently diverging from the price of the euro. It has double-bottomed, while the euro continues to fall. 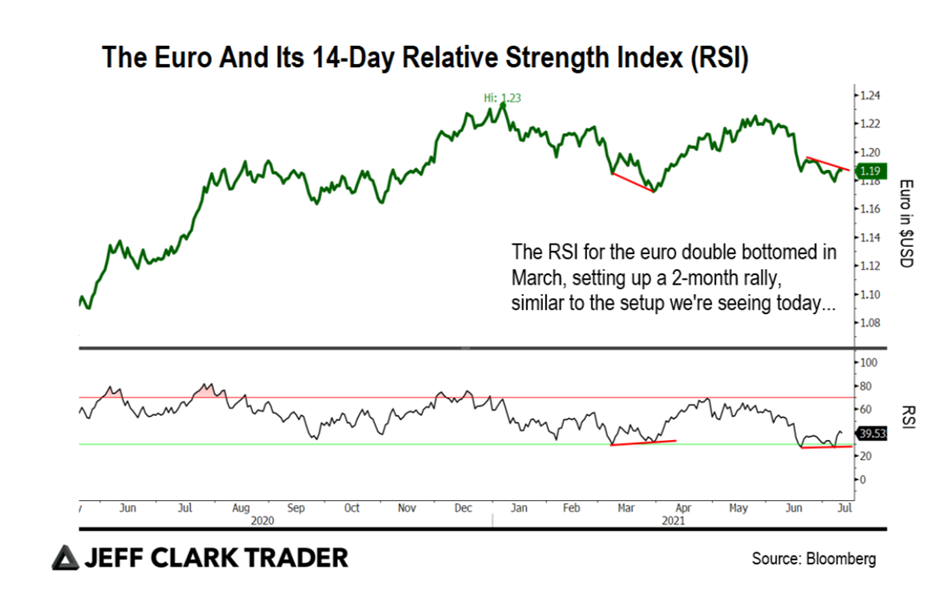 The top of the chart shows the price of the euro priced in dollar terms (green line).

The bottom of the chart represents the RSI (black line). In this section, the green line means the euro is oversold, while the red line means it’s overbought. Right now, the euro is bouncing back from oversold levels on the RSI, just like it did in late March, before a big 2-month rally.

All of this points to a top in the dollar along with a huge boost for the metals and agriculture sector.

As the real rate continues its downtrend, and with the recent developments in the dollar, I see this as a good opportunity to buy gold at cheaper levels.

Ultimately, I believe gold will break last year’s highs on its way to $2,400.

Platinum is another precious metal that stands to benefit from dollar weakness along with a growing EV sector.

We recommended adding some platinum exposure in late June, and now it’s back up to $1,125/troy ounce. It just didn’t make sense for a commodity that benefits from BOTH inflationary pressures and a growing economy to trade below that mark…

And finally, let’s look at the agriculture sector.

Even though many investors look to the Invesco DB Agriculture Fund (DBA) ETF for agricultural exposure, which will work well, the better play is in the niche cocoa sector.

Cocoa prices will benefit most from a rising euro due to its production in West Africa’s Ivory Coast, where the West African franc is directly pegged to the euro.

The only product out there that gives direct access to cocoa prices through the equity markets is the iPath Bloomberg Cocoa Subindex Total Return ETN (NIB)… but it’s traded very thinly, so investors should be aware not to overpay for market orders.

Will you be looking for agricultural exposure in the niche sector? Or are you more likely to stay with the go-to DBA ETF?