Returns like these are rare in the markets… Mostly coming after recessions.

But what’s even more rare is how the market rose in a straight line, almost without a hitch.

Lately, though, the market’s hit a speed bump. Since putting in new all-time highs last week, the S&P 500 is down over 2% at writing.

It takes skill to recognize periods when the market is about to cool off, like we’re seeing now. And that’s especially true in the middle of a massive bull run…

Of course, it’s hard to go against the grain… And, it’s even harder to be right in doing so.

But mainstream thinking produces mainstream returns…. Getting an “edge” comes from having a different perspective. And that’s why our goal with the Market Minute is to bring you a perspective on trading you won’t find in the mainstream… To give you an edge that most traders don’t have.

One thing you should know is that whether you’re an experienced trader or a relative newcomer, there’s always something to learn. I’ve been trading the markets for nearly a decade, and still, I’ve learned a lot from Jeff’s approach. It’s made me better.

So in today’s essay, I’d like to follow up on the essay Jeff recently published here in the Market Minute. It showed you how to use a key charting indicator – Bollinger Bands – to time market volatility.

Today, I’m going to dive into his approach a little deeper. And, using a data-driven analysis I put together, I’ll show you just how valuable this indicator is…

How Jeff Times the VIX

Once you wrap your head around it, you’ll understand how Jeff has been able to profitably trade the markets for more than 30 years by using it.

But before we get to that, a quick explainer on how Bollinger Bands work…

Bollinger Bands show the relative volatility of an asset or index. The wider the bands, the more volatility in the underlying asset. When the bands pinch together, however, it suggests energy is building up for a big move – which would widen the bands once again.

When you use these bands on the VIX – which tracks investor expectations of volatility in the near term – you can get a good sense of when to expect spikes in volatility.

When Jeff showed you Bollinger Bands last Monday, he wrote, “When it comes to the VIX, periods of low volatility are always followed by periods of high volatility, and vice versa.”

This is true. But the thing is, when the VIX spikes, most investors – like the mainstream financial press – don’t see it coming.

As you may know, the VIX and the stock market tend to trade opposite each other. When there’s a build-up in the VIX, especially after a big run-up in markets, it’s usually a great time to take money off the table… Or, for more aggressive traders, even bet against the market.

And Jeff spotted this exact dynamic ahead of this week’s selloff. Here’s what Jeff said about it: “Energy is building. There’s a big move coming… And, my guess is that big move will be to the downside…”

Jeff saw this coming from a mile away… He wrote on to say, “Whenever the Bollinger Bands pinch together – a condition caused by a period of low volatility – we often get a surge in volatility soon afterwards.”

You can see this action clearly on the VIX chart below… 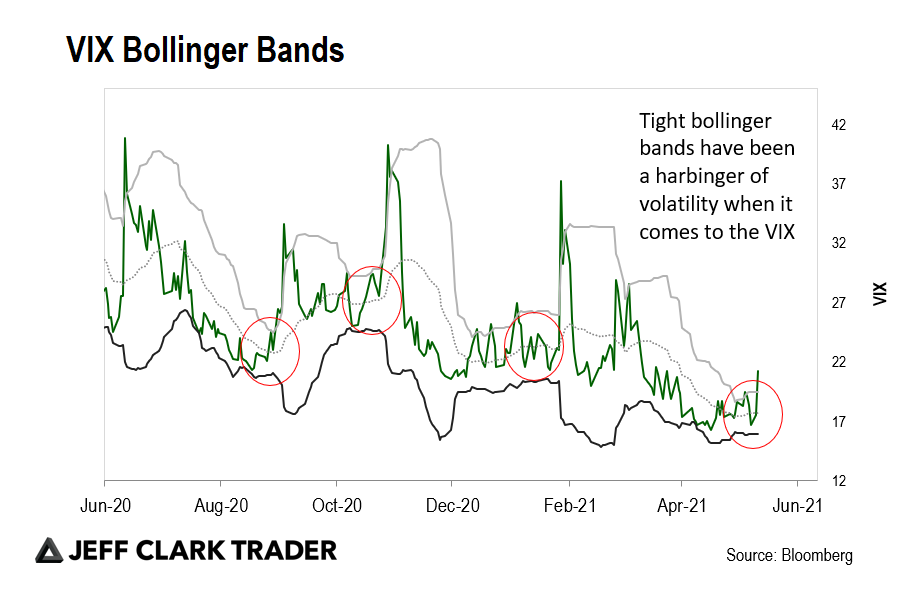 As you can see, Jeff’s approach captured all three major volatility surges over the last year… In June, September-October, and February. And now, it’s caught this one as well.

Timing the VIX Protects Your Portfolio

To further prove this idea, I did a specific study using VIX data. It shows what would’ve happened if you “bought” the VIX every time the Bollinger Bands pinched below the 25-width level, and then exited the position when the bands widened back above 25.

Although investors can’t directly buy the VIX – other than by trading products that track this index like the iPath Series B S&P 500 VIX Short-Term Futures ETN (VXX) – the study shows this approach as an effective timing mechanism. 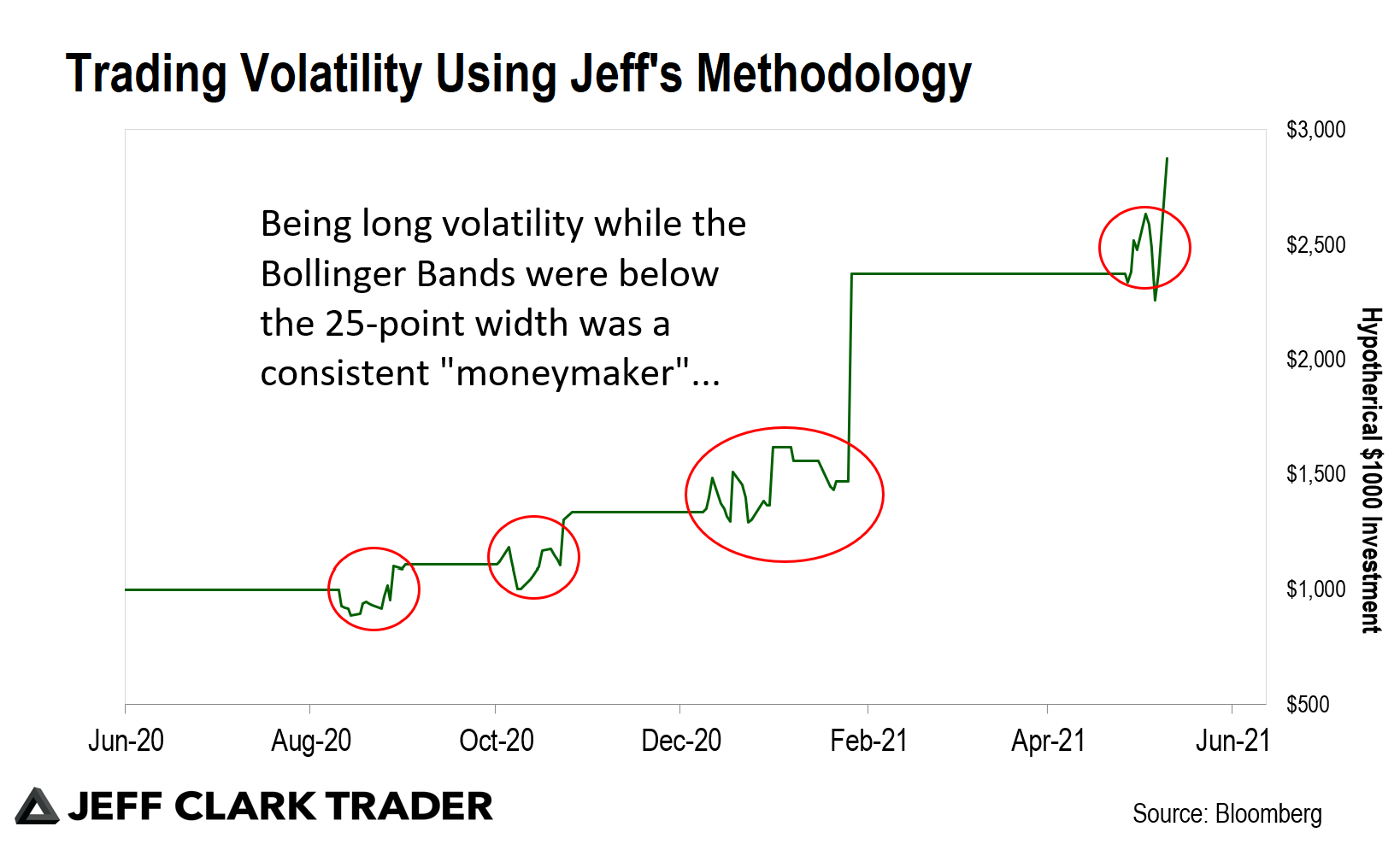 If you followed Jeff’s method, you’d be correct about volatility rising each time. With a hypothetical $1,000 starting capital, the strategy would return more than 180% on just a handful of trades on the VIX itself.

And of course, whenever volatility rose, markets subsequently sold off. This system shows you exactly when to be in the market, and when to get out.

Here’s what I’m trying to tell you…

If you keep an eye on the VIX while using the Bollinger Bands, you effectively get a “heads up” that the market is about to enter a cooling-off period. And sometimes, this evolves into violent selloffs.

Whether it’s by taking some profits when the Bollinger Bands pinch, getting aggressive on the short side, or by simply avoiding any new positions during these times, any trader can benefit by following this strategy.

Jeff and I will keep a close eye on this dynamic, and we’ll give you a heads up whenever we notice that volatility may be about to spike again.

Jeff, I’m extremely impressed with your approach and logic. Very few people explain calmly without making gigantic efforts to say what they’ve done and recommended. I appreciate your manner and presentations. I’m new to this, and look forward to paper trading first.

I want to start learning about the companies as well… It’ll help me understand your approach along the way. Thanks for your help so far.