Last week, Jeff Clark wrote a very timely essay on the energy sector… It was spot on. I’d like to support his essay with a different perspective and discuss where it’s going next.

For new investors, headline-grabbing market events can seem like a good reason to chase prices. But in most cases, these headlines are actually traps.

We’ve seen it time and again. Some major news comes out – whether it’s the Fed promising more support, or a new addition to a major stock index – and prices overreact as the headlines fuel the hype.

And nearly every time, these prices wind up right where they started. Sometimes even lower.

It just goes to show that the old market saying – buy the rumor, sell the fact – still works. Once headlines catch on, so does everyone reading them… Leaving little further upside on the table.

Often, doing the exact opposite of what the headlines tell you do to is actually the best course of action. That’s why playing these events can be psychologically painful. It’s uncomfortable to cash out on good news…

But if you don’t want to fall victim to headline hype, this is exactly what you need to do. That’s why in today’s essay, I’ll share a far better trading method than reading hyped-up headlines… And what this method suggests about a hot corner of the market on my radar.

Up on Hype, Down on Fundamentals

I can’t think of a better example of “buy the rumor, sell the fact” right now than what’s happening in the energy sector.

On March 5, The Organization of the Petroleum Exporting Countries (OPEC) gave the oil market what it wanted… It said they would keep supplies tight by not increasing production.

Prices jumped more than 5% on the news, only to fall back down -10% in the coming days. That’s even lower than before the news came out.

Regular Market Minute readers will recall our warnings about the oil sector. Back on March 3, we showed you that regardless of OPEC’s decision on oil production, oil producers will use the opportunity to lock in profits, and start ramping production… Especially if there’s a strong price reaction to the news.

Then on March 15, we pointed out that sentiment for oil stocks was at a fever pitch… And it’s time to start looking the other way.

Any positive price action from the OPEC news is now gone. And any investor who bought oil stocks on that news is likely now down on their position.

This goes to show that headlines steer investors the wrong way. And that, if they really want an edge in the market, they need to follow the data.

How to Know When Oil Is a Buy… Or a Sell

To do that, I look to something called a futures calendar spread. Simply put, it’s the difference between prices today and what prices investors expect in the future. And these spreads trade on the open market, like other securities.

Oil producers sell these calendar spreads to lock in gains when prices are high. Once they do, they “owe” the market more oil… And must produce more to meet their obligations – driving down oil prices.

So, when these spreads fall while oil prices continue to rise, it’s usually a telltale sign that over-speculation has taken over… And it’s time to trade the other way.

To see what I mean, take a look at this chart… 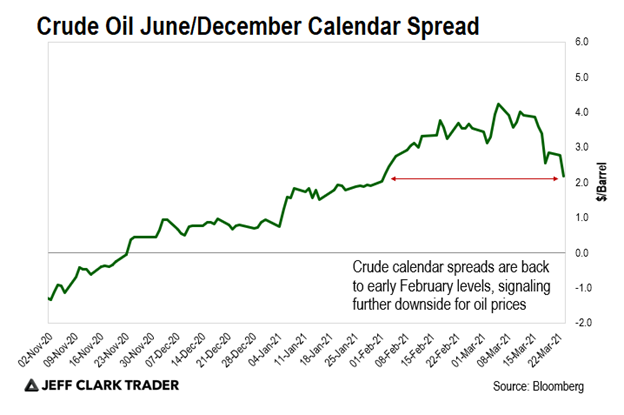 This chart shows the spread between what investors think oil will be trading at in June, and where they think it will trade in December.

Right now, these spreads are trading at their early February levels – back when oil was trading at $52-$54 per barrel.

In order for oil to match those levels, it would have to fall at least another 10%. And, as this plays out, it will drag energy companies down with it.

But that’s not the only reason I see more downside ahead in oil.

What Happens When Fundamentals Change Quickly

In addition, the Commodity Futures Trading Commission (CFTC) publishes a weekly report showing futures positions of hedge funds and physical producers. Typically, hedge funds will be most exposed just as prices are set to fall. That’s the case right now. Hedge funds are back to pre-pandemic exposure levels, when oil was trading at around $50 per barrel.

To me, this means there’s more downside ahead in oil prices and energy stocks.

As of Monday, USO was trading at $41.75. If it falls 10% from here, as I expect, traders can play this by buying put options with strike prices around $40 or better.

More conservative investors can simply lighten up on their energy holdings like XLE and wait for another leg down to this correction before re-entering the market at more favorable prices.

Commodities are a hot trade this year, but over-speculation can cause dangerous price distortions. Once oil finds stability at lower prices, that may present a better opportunity to buy oil and energy stocks.

Have you ever chased market prices because of a headline, and ended up getting burned? Or do you normally ignore the hype?