The stock market is changing character.

It’s more volatile – swinging from oversold to overbought and back again. Investor sentiment flip-flops between bullish and bearish almost every week. And traditional seasonal patterns – which played out with remarkable regularity over the past 10 years – are no longer reliable.

For example, Thanksgiving week, which is normally bullish, turned out to be bearish this year. But, by the end of the week, conditions were so oversold and investor sentiment (a contrary indicator) was so overwhelmingly bearish that a bounce looked like a good possibility.

And we got one heck of a bounce.

That was enough to flip most technical conditions from oversold to overbought. And it was enough to shift investor sentiment from miserably bearish to quite bullish.

The financial television talking heads were giddy at the end of the day on Monday. Heck, many of them were calling for a rally to new all-time highs by the end of the year.

That changed on Tuesday, when the S&P lost 3.24% in one day. Stocks continued lower yesterday, with the S&P hitting s low of 2623 during the session.

This action feels quite similar to the action in late 2007. In other words, I think we’re transitioning from a bull market to a bear market.

But the strategy for trading a bear market is different than trading a bull market. You can’t look for trades that last several weeks. Most trade setups in a bear market will play out within days. So, you have to be more active.

You can’t hold positions and try to capture the largest possible profit. Trailing stops won’t work. If you try using them, you’ll watch profits one day turn into losses the next – because the market will gap in the opposite direction. So, you have to be quick to take profits – without worrying about leaving money on the table.

Just think about everyone who was shorting stocks into oversold conditions during Thanksgiving week. They got crushed when the market reversed course and put on a blistering rally last week.

And for traders who bought stocks into overbought conditions last Monday, well… they’ve been crushed by the action the past two trading days.

I think that’s a good thing.

For now, though, let’s take a look at the long-term picture of the market so that you can understand why I’m thinking this way. Here’s the monthly chart of the S&P 500… 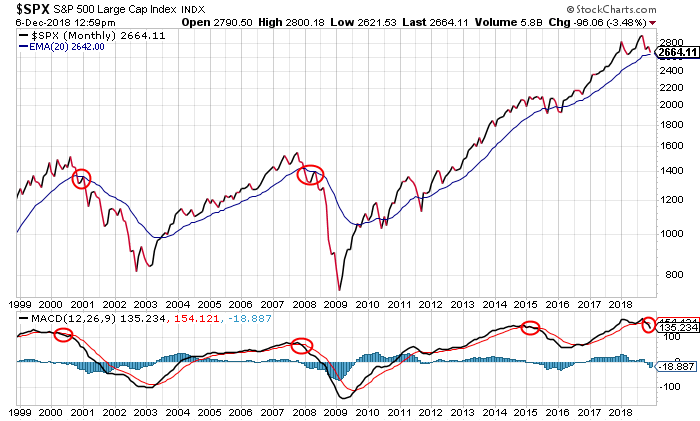 Look at the MACD indicator at the bottom of the chart. The red circles show each time over the past 20 years this indicator has turned lower from overbought conditions.

In 2000 and 2007, those downturns warned investors that the market was topping. The bull market was ending. And a new bear market was on the way.

In 2015, the MACD indicator turned lower. But, the stock market didn’t break down. So, we might view that as a false signal.

Keep in mind, though, the market spent most of 2015 just chopping back and forth. So, you wouldn’t have missed out on much if you turned cautious in early 2015.

Last week, as we finished out November, the MACD indicator on this chart turned lower from overbought conditions. Given its history, this indicator has turned me cautious.

The monthly chart of the S&P is still holding above its 20-month exponential moving average. So, we’re still in a bull market for now.

But, this chart looks quite vulnerable to me. With the MACD turning lower, I suspect we’re probably just a month or two away from the broad market breaking down and reversing the primary trend from bullish to bearish.

That may not matter much in the short term. The S&P is oversold enough to put on a decent bounce, and it won’t surprise me if the rally lasts a few days. But the longer-term picture is turning bearish. So, the trading strategy that worked for most of the past decade is probably not going to work in 2019.

Like I said before, I think that’s a good thing – especially for traders who are prepared for it.

Editor’s note: During Jeff’s Mastermind Kickoff event last night, Jeff discussed his proprietary trading strategy for a bear market. He even demonstrated it, making a live trade and earning 36% in 4 days. It was a huge hit, and hundreds of your fellow readers tuned in.

Jeff will share more of his techniques during his upcoming Mastermind, and this free kickoff event gives a glimpse into how Jeff enters and exits trades, looks for trade setups, and even three market setups you can use to apply his strategy.

Jeff’s agreed to share a replay of the event, but not for long. We’re taking it down tomorrow night at midnight… so you’ll want to click here before it’s too late. It may end up being the best investment decision you ever make…

In today’s mailbag, plenty of readers share their excitement for the Mastermind Kickoff and the upcoming course…

Jeff, I have always been fan which encouraged my lifetime purchase. But, unintentionally, you became a symbol of excellence – not just a person. Your recent video posts and your home/trading station slapped me in the face. I now see a very generous and gifted person. I can’t thank you enough because you have been a trading role model for years. Now you are a life role model.

I moved recently, and my wife and I nearly purchased a house near Mt. Tam. I would laugh and joke, “Jeff Clark lives somewhere on this side of the bridge, probably Marin or Tiburon.” She would always ask me, who is Jeff Clark? I only answered, “A legend.” It was out of respect. Thank you for providing this opportunity.

I think [your subscribers] are my kind of people. Hardworking, giving to others, enjoying the fruits of their labors, returning to give thanks to whom they received.

There are givers and takers in this world of ours, I’m glad to find out I’ll be among a lot of givers and you are the first in line. Sharing your knowledge with us is another gift I accept, and thank you! Looking out for the unschooled in finance, teaching others, sharing wisdom is a great gift you give to all of us. Thanks again. : )

Hi Jeff. I was a financial planner for 20 years and sold my business in March of this year. I plan on taking the savings I have and making the pot much larger. I have learned a lot about trading from you over the past year and have put it into practice.

Trading options is a much better way to make your money grow vs. managed money, and a lot more fun… Thanks for all the wisdom and profitable trades over the past year.

I just started following your system. Very informative and entertaining! I am anxious to get started trading options. I have never done this before.

Thanks for your willingness to share your experienced methodology!

Jeff, I’ve missed your service since you left Stansberry Research. You’re one of the main reasons I joined the Legacy group. I look forward to working with you again.

Hi Jeff, I am really looking forward to your Mastermind Kickoff! I still have a lot to learn about trading and I’m hoping the session can help me on many different fronts.

Jeff, looking forward to listening and learning. I’ve known about, followed, and been impressed by you for years… going back to before you joined Stansberry Research. I just subscribed to your current service and I’m learning… I am sure it will be worth me listening. Thanks.

Did you sign up for Jeff’s Mastermind? What are you most excited to learn about when the sessions start?

Send in your responses, along with any questions or suggestions, to [email protected].