Heck, it could make it there by Thanksgiving. But, let’s give this prediction a little wiggle room.

Of course, August was a frustrating month for many gold bugs. The metal finished July near $2,000 per ounce. Then it spent all of August drifting lower. It closed Friday at $1,934 – down $130 from its early-August high.

Last week was especially frustrating. Given the sharp decline in the stock market on Thursday and Friday, most folks would probably expect gold to rally. That’s often what happens when stocks sell off and investors run to “safe-haven” assets like gold.

But, gold fell last week too.

That action has a few folks wondering if the price of gold has peaked.

It hasn’t. Gold has at least one more rally left in it. And, by the look of the following chart, that rally should get started soon… 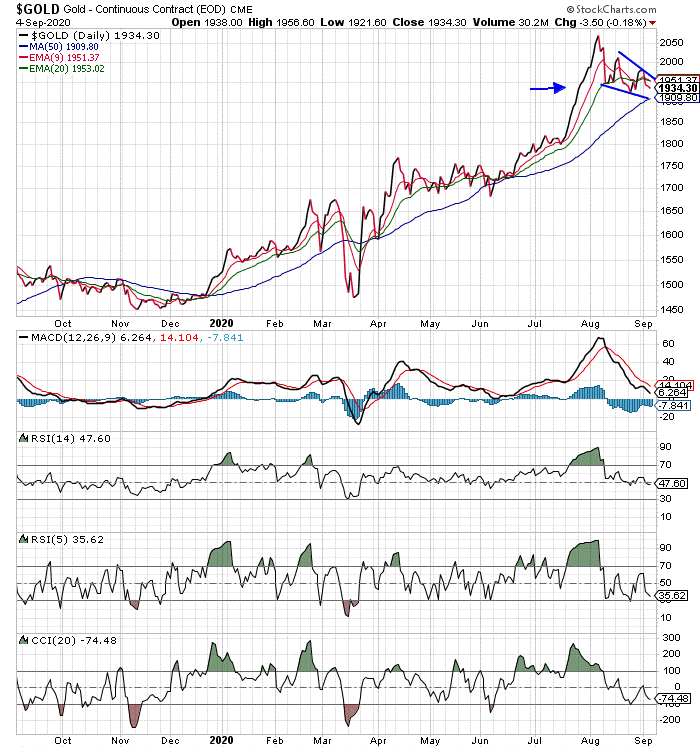 This chart has formed a “bull flag” pattern. The big spike higher in July is the flagpole. And, the consolidating action since then is the flag.

This pattern typically resolves with another spike higher – which is often the same size as the first flagpole. The spike in July was $260. So, if we add that to the current price of gold, we get an upside target near $2,200 per ounce.

There are several bullish things happening on this chart…

All of the various moving averages, which got quite extended in early August, are starting to come together – building energy for the next big move. A similar consolidation in May and June preceded the big rally we saw in July.

Also, all of the technical indicators at the bottom of the chart have pulled back from extremely overbought conditions in early August. They’re now in neutral territory. This is also similar to what happened in May and June.

So, it looks to me like gold is setting up for another run higher.

There’s still room for a bit more downside action first. It wouldn’t surprise me at all if the price of gold dipped slightly below its 50-day moving average (MA – blue line) at about $1,910.

That’s what it did back in early June. And, that sort of action today might be enough to shake out some of the “weak hands” who bought the metal at higher prices.

But, traders should use that weakness as a chance to buy. This setup looks bullish to me.

P.S. In the finance world, changes in rules and regulations can often get overlooked. Luckily, Teeka Tiwari, my colleague and editor of Palm Beach Daily, has caught something that was once restricted to wealthy insiders.

He’s found a deal in what Forbes is calling “the most profitable sector” in the country right now, despite most folks knowing nothing about it. With massive potential for gains, this isn’t something you want to miss.

So, join Teeka tonight at 8 p.m. ET, for his Set for Life Summit, where he will reveal how everyday folks can now have access to life-changing gains that only millionaires were able to profit from.

I totally screwed up the March crash and lost thousands of dollars. I made stupid mistakes and was working on learning technical analysis with options but didn’t find you until April!

I read your training materials over and over, and I’m now working on a comeback. Your info and trades are very helpful – except XLK, but that one will be a big hit in the near future. Glad I found you!