That’s just some of what folks are saying about my prediction that the stock market will crash this year.

I can’t blame them for being skeptical. After all, the financial industry is full of folks who make scary predictions just to capture headlines and get their “15 minutes of fame.”

But, what if I’m not one of those people?

What if I’m just a guy who has been following the financial markets for nearly four decades? What if I’ve made plenty of bold calls – many of which have been dead-on accurate? And what if I’m noticing that many conditions in the stock market today are eerily similar to conditions that have preceded bear markets before?

Folks… that’s not fearmongering. That’s just suggesting, as the storm clouds build in the distance, that you might want to carry an umbrella.

Let me show you just one of the things that has me concerned. Take a look at this monthly chart of the S&P 500 plotted along with its 20-month exponential moving average (EMA)… 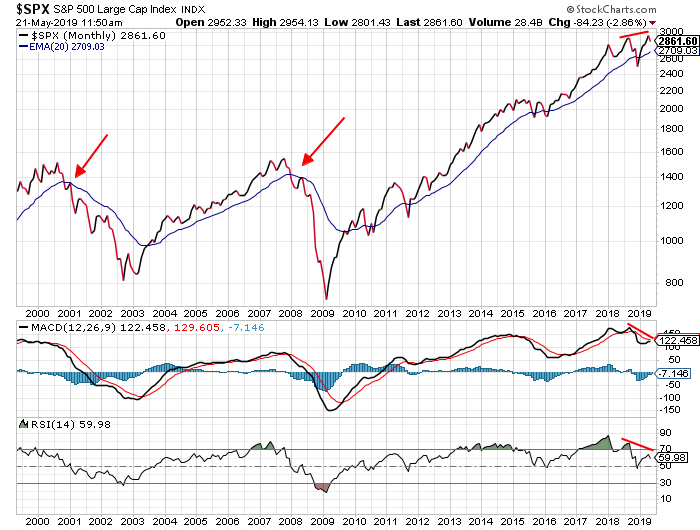 Longtime readers know I use this chart to define bull and bear markets. If the S&P 500 is trading above its 20-month EMA, stocks are in a bull market. If the index is trading below the line, the bear is in charge.

The MACD indicator at the bottom of the chart provides one of the early warning signs of a bear market.

Without getting too complicated, if the black MACD line is trading above the red line, stocks are in a bull market. When the black line crosses below the red line, traders need to be on the lookout for the bear.

Notice how in 2000 and 2007, the MACD indicator gave us that “bearish cross” from extremely overbought conditions. In both cases, the S&P 500 dropped into a bear market a few months later.

Of course, you’ll notice the S&P 500 also dropped below its 20-month EMA in 2010 and 2011. But, in both of those situations the MACD was more neutral than overbought. There wasn’t a bearish cross in 2010. And in 2011, the bearish cross reversed just one month later.

So, we didn’t have the conditions necessary for a bear market.

Today, though, the storm clouds look a little more ominous.

The MACD indicator completed a bearish cross last November. And, it hasn’t yet reversed (as it did in 2010 and 2011). That’s a significant warning sign.

The stock market has recovered from December’s breakdown. And, the S&P 500 did manage to make a new all-time high in April. But, that action has created negative divergence on both the MACD and Relative Strength Index (RSI) indicators.

Negative divergence – when a chart makes a higher high but an indicator makes a lower high – tells us that the momentum behind the rally is waning. It’s a sign of a potential change in trend from a bull market to a bear market.

This is just one of the reasons that suggests to me that the stock market may be heading for a crash later this year. I’ll share a few more reasons in a special presentation tonight (click here to reserve a seat).

For now, the S&P 500 is still trading above its 20-month EMA. So, the bull market is still intact. But, there are plenty of caution signs.

So, like I said earlier, maybe you might want to carry an umbrella. You know… just in case.

P.S. Tonight’s the night where I’ll fully lay out my case for a 2019 market crash.

Whether you agree with me or not, I urge you to join tonight’s broadcast. Why?

Because if you’re invested in this market, everything you’ve built over the past 11 years is at risk. And I know the one technique you need to use to protect yourself, and profit, when (not if) the market crashes. During tonight’s presentation, you’ll learn what it is and how to start using it.

You won’t have many more chances to learn this technique… Sign up right here.

My approach to this impending flood will be relying on your predictions… and I thank you, in advance, for your sincere effort to save my bacon.

What’s your “carry-an-umbrella” strategy for volatile market action? How are you preparing for a potential market crash?

Let us know how you’re trading, along with any other trading questions, stories, or suggestions at [email protected].