The Volatility Index (VIX) triggered a new buy signal when it closed back inside its Bollinger Bands yesterday. We should see higher stock prices over the next few weeks.

But, there’s a problem…

Yesterday’s 37-point bounce in the S&P 500 used up a lot of energy. Technical indicators on the intraday charts are already in overbought territory. It’s possible the market may have already posted much of the potential gains from this new buy signal. Traders who chase stocks higher today may be disappointed with the results.

So, rather than closing our eyes and just buying right now, please allow me to offer an alternative strategy…

Think back to the last time the VIX generated a buy signal – March 27.

The VIX closed above its upper Bollinger Band on Friday, March 23. It remained above the band on Monday. Then, on Tuesday, March 27, the stock market exploded higher in a remarkable “one-day wonder” rally that spiked the S&P 500 70 points higher and pummeled the VIX well back inside its Bollinger Bands.

The VIX buy signal occurred AFTER that huge rally.

Now… traders could have simply held their noses and bought stocks the very next day. The S&P 500 did gain another 60 points over the next three weeks. So, the buy signal still proved profitable.

But it’s rarely a good idea for traders to chase stocks higher into short-term overbought conditions. Most of the time, we’ll get some short-term weakness that gives us a better chance to buy. 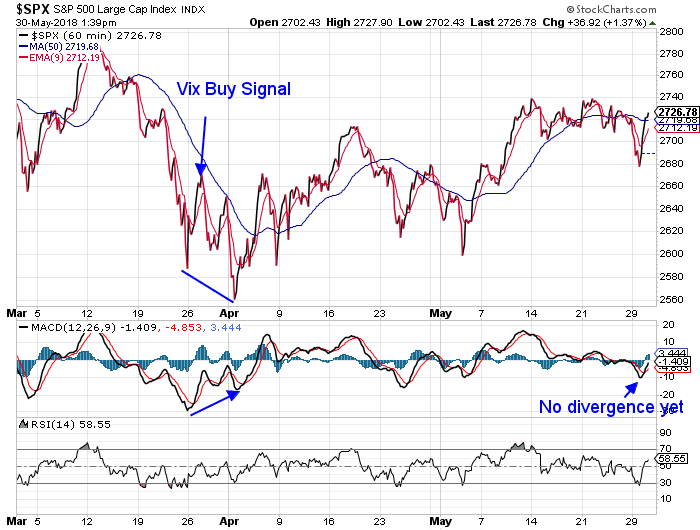 And that’s what happened. Following the big, 70-point, one-day wonder rally that generated the buy signal on March 27, stocks fell again. The S&P 500 dropped to a new intraday low on Monday, April 2.

Notice, though, that there was positive divergence in place. As the S&P hit a new low, the MACD indicator formed a higher low. This is often an early warning sign of an impending rally.

Traders could have profited buying stocks immediately following the VIX buy signal in March. But they would have suffered through a pullback before the “real” rally kicked into gear. Clearly, traders who waited for a pullback that formed positive divergence had a chance to do even better.

So, that brings us to the new VIX buy signal that was triggered yesterday.

On the chart, you can see there was no divergence on the MACD indicator as the S&P 500 hit its low on Tuesday. Then we got a sharp, 37-point rally in the index yesterday.

This situation looks a lot like the previous VIX buy signal. If it plays out the same way, then stocks may suffer through a bit of a pullback over the next few days.

Traders who don’t have any long exposure might just have to hold their noses and buy – just to be involved in any rally over the next few weeks.

But if you already have some exposure to the stock market, then be patient and wait for the market to relieve its current short-term overbought conditions. If the S&P 500 pulls back over the next few sessions, and we get some positive divergence on the 60-minute chart, that will provide an excellent chance to put some more money to work.

We’ve had an unusually light mailbag so far this week…

Remember, we’re always happy to hear your trading stories, thoughts on the markets, and suggestions for the Minute. Feel free to send them our way right here.

Could One Company Solve This Crisis?

The opioid epidemic is one of the biggest problems our country has ever faced. It’s so big that President Trump declared it a national emergency under federal law… and Congress just approved $6 billion to fight it.

Now, a former corporate banking insider believes he’s found the next one to ride this unique wave. Get all the details here before it’s too late. 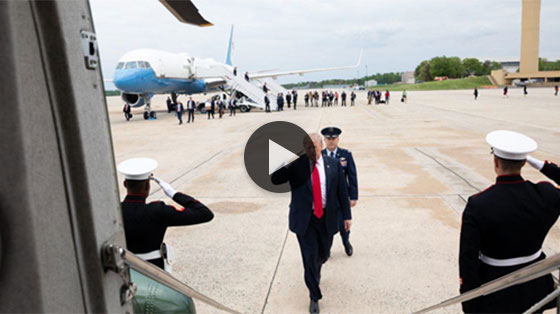